Residents of Lengkuk Golf SS7, Kelana Jaya, claim the design of the walkway project, that has been ongoing since August, is not people-friendly.

RESIDENTS of Lengkuk Golf SS7, Kelana Jaya are unhappy about the design and quality of the neighbourhood’s walkway project.

They said the design was not people-friendly and the workmanship, poor.

The project, estimated to cost about RM1mil, began in August last year.

“The contractor has little regard for road safety. The construction materials are all over the place.

“It reflects the contractor’s incompetence and the lack of supervision by Petaling Jaya City Council (MBPJ).”

He said they had a meeting with MBPJ and the contractor over the project.

“Designs were suggested, however, it was not reflected, in the delivery process.

“The walkway pavements are high and have become an obstruction to residents.

“The existing design is not people-friendly. The residents don’t like it,” he said.

Residents are unhappy over the quality of the kerb upgrade in Jalan SS7/26.

Zulmukhshar added that the quality of the job was also questionable and he urged the council to investigate.

“We understand RM1mil was allocated. I believe with that money, more areas could have been covered with a walkway,” he said.

The neighbourhood’s residents association (RA) contacted StarMetro after recent reports questioning the quality control and monitoring on work carried out by council-appointed contractors.

The quality of the kerb upgrade on Jalan SS7/26 had also been questioned.

Petaling Jaya mayor Mohd Azizi Mohd Zain said he would look into the matter and gave his assurance that contractors were always required to do a satisfactory job or payment would not be made.

“We won’t pay them until they do it well,” he said.

Chong said being a member of Kelab Golf Negara Subang located close to Jalan SS7/2, Kelana Jaya, he had driven along the affected area numerous times and noticed the delay in the completion of the project.

Chong, who had expertise in the field of construction management, said the design of the pavement was not suitable.

He added that a motorist had complained that he could no longer park well on his driveway.

“The residents claim the pavement is high and their guests can no longer park on the driveway,” he said.

Chong welcomed the idea to make walkways disabled-friendly. However, the tactile fitting on the short pavements along Jalan SS7/2, were rather awkward, he said.

“The walkway is not a stretch of long connected path. There are many broken links within a few metres. It is better if they put tactile on longer stretches of walkways in the inner part of the neighbourhoods,” he said.

Chong was also concerned for the safety of motorists.

“It may be harder for those on motorbikes to drive along this two-way road now with the pavement project.

“Those on bikes will now avoid the higher pavement section for fear of ramming into it. They would instead ride their bikes in the middle of the road which will be dangerous for them,” he said. 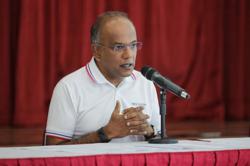