Visitors having a fun time feeding horses at the stables.

The crowd took part in various activities and competitions throughout the four-day event called ‘An International Festival with Horses’.

Many took the opportunity to hand feed horses at the stables and walked away with a newfound appreciation of the magnificent creatures.

Some posed with horse sculptures while others enjoyed carriage rides around the grounds.

Children had the privilege of mounting little ponies as they trotted along a track in the company of parents and handlers.

The more adventurous adults took the Flying Phoenix challenge, trying their best but inevitably failing to stay atop the mechanical bucking horse.

Clowns roamed around amusing the crowd with their funny antics and balloon sculpting while musicians, dancers and more provided non-stop entertainment on stage.

And all around, there were bazaar stalls selling equine-themed items from beautiful ceramic sculptures to T-shirts.

At the opening ceremony on Saturday, Penang Yang di-Pertua Negeri Haji Abdul Rahman Abbas made a grand entrance via horse carriage in front of dignitaries and guests.

Following that were a Dances with Horses extravaganza and Parade of Traditional Costumes where riders eschewed regular attire for cultural garments.

In his speech, Penang Turf Club president Datuk Ong Eng Khuan said they had, since 2001, successfully organised no less than 10 horse shows at local, national and international levels.

“This horse show is a great promotion for equestrian sports.

“It also contributes to Penang's tourism appeal, especially during the holiday season.”

The event kicked off on Thursday with the Equestrian Competition featuring various categories of dressage and show jumping.

Riders from countries such as Australia, Belgium, the Netherlands, Portugal, Sweden, South Africa, Turkmenistan and Singapore were partnered with Malaysian riders to compete as teams.

Farriers from across the country and Japan battled each other in a red-hot and keenly contested International Farriery Competition.

Visitors were also wowed by the deadeye accuracy of Hungarian horseback archery maestro Kassai Lajos, and the Horse and Hound Showjumping Competition in the final day yesterday. 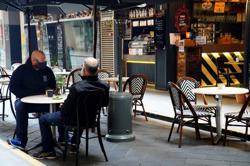