S. Ravivarhman (right) and Ruben Prakash Anthony Albert preparing a kolam during the event in Kulim.

The 27-year-old brought the Indian tunic from Russia.

She was among 200 foreign pressmen and travel agents at the event while on a mega familiarisation trip to Malaysia.

“I achieved several firsts here. This is my first time donning a kurti, my first trip to this country and first time at such a festive celebration.

“I got this kurti as a gift from an Indian tourist in Russia and brought it along, knowing Deepavali is always celebrated with grandeur.

“We were also brought to Batu Caves in Kuala Lumpur and other tourist attractions,” she said at the event on Wednesday, adding that she was impressed by the diverse culture here and the warm, friendly people. Part of the 456 participants holding muruku moulds in an attempt to set the record for the most number of muruku makers preparing the delicacy.

Thousands of Malaysians of all races and ages ignored the rain to attend the colourful event.

The highlight of the event was the mass making of muruku — an Indian traditional snack — that involved 456 participants.

Even Prime Minister Datuk Seri Najib Tun Razak and his wife Datin Seri Rosmah Mansor pitched in with 456 other participants to enter the Malaysia Book of Records for the most number of muruku makers preparing the delicacy at one time.

Participant Zaharah Mustafa, 64, said most of them were first-timers in making muruku.

“All of us were excited about making it to the Malaysia Book of Records. We even got to see the Prime Minister,” she smiled.

The stage performances were another crowd puller, with the evergreen Datuk David Arumugam, Ewal from Akademi Fantasia, Sathia and impersonators of the legendary MGR and Rajinikanth raking centrestage. 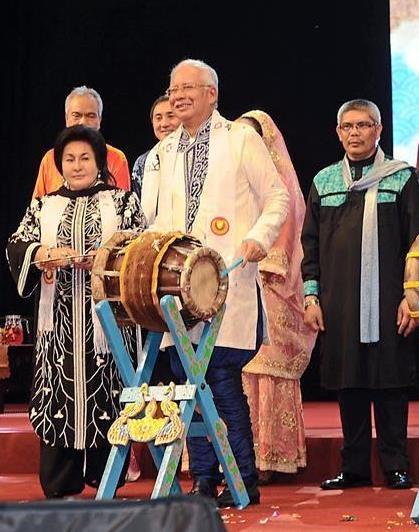 Najib striking the tabla to launch the national-level Deepavali Open House celebrations at Dataran Kulim in Kulim, Kedah. Joining him on stage are Rosmah and other leaders. — Photos: MUSTAFA AHMAD/The Star

Santhia and the impersonators, especially, had the crowd in stitches with their on-stage antics.

Several booths were also set up by various ministries and government agencies to promote their activities.

The event was organised by Tourism and Culture Ministry and the Kedah government.