Kin of the departed delighted with initiatives taken to preserve cemetery

DESCENDANTS of those who were laid to rest at the old Catholic Cemetery located off Penang Road have lauded the restoration plans at the site.

Deborah Taylor, 55, who lives in Brighton, England, said it was great that some parties are taking the initiative to preserve the cemetery and keeping it safe for generations to come.

“My first visit here was about 30 years ago and I have been returning several times over the years.

“It looks better now compared to the first time I was here,” she said.

Deborah and her siblings Christopher, 59, and Caroline, 53, had flown all the way from England for the launching of the cemetery’s restoration campaign on the eve of All Souls’ Day recently.

The cemetery is believed to be the oldest Catholic cemetery on Penang island. 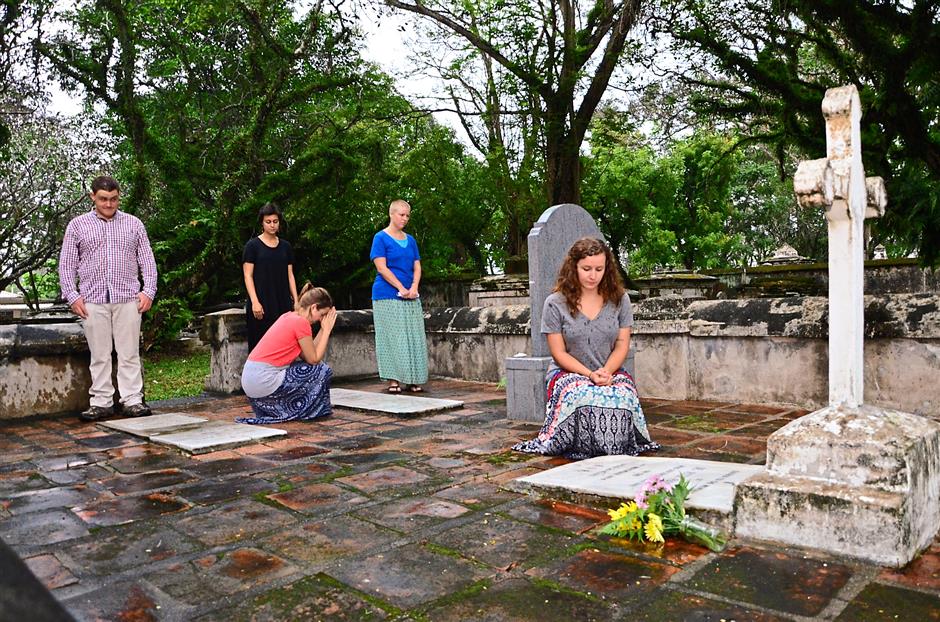 The Taylor siblings are nieces and nephew of retired teacher Ann Cutter, 76, who was also present at the event.

Ann said that among her ancestors who were laid to rest at the cemetery, were her great-great-great grandfather, D’Oliverio and his Thai princess wife, nicknamed “Bobo”.

“They had a daughter, Marianne D’Oliverio, who married Maximo Doral. They were my great-great grandparents. My great-great-great grandfather, Bobo and Maximo were buried here while Marianne was laid to rest at the Western Road Christian Cemetery. Marianne lived to 84 years old.

“For me, I always knew who my ancestors are and I wanted the graves preserved. I am very grateful to those involved in this restoration,” she said.

Christopher said his father was in the army when he met his mother, who is Ann’s sister, in Penang.

It was reported that the mapping of the 0.34ha site between the St Francis Xavier Church and the Protestant Cemetery in Jalan Sultan Ahmad Shah, started about three weeks ago. The aim is to mark the location of the tombs numbering about 220.

The oldest tombstone discovered was that of a Portuguese woman dated 1798 and the most recent was from the 1920s.

With more expected to be unveiled during the restoration, which will cost RM300,000, the place has been identified as a burial ground where missionaries, educators, traders, planters, sailors, musicians, European noblemen, Eurasians, Chinese and Indian Christians were laid to rest.

He also said that the restoration would take at least two years.

The first phase will involve the dilapidation study to record the condition of the tombs and research restoration options while the second phase, which is expected to start next year, is a heritage management plan involving the materials to be used for repair and preservation.

The cemetery, which is managed by the Roman Catholic Diocese of Penang, is believed to be the oldest Catholic cemetery on the island

He also thanked The Star for its report on Oct 30, which highlighted the plans to restore the old Catholic Cemetery.

A slight drizzle did not dampen the spirit of those who were present, as they proceeded to the cemetery that was located adjacent to the home, to witness the blessing by Bishop Sebastian at the cemetery.

The event, which was followed by mass at St Francis Xavier’s Church, also saw the presence of several missionaries from the United States.

Brooke Leffelman, 33, from Georgia, Morgan Wingler, 23, from South Carolina, Chloe Young, 24, from Washington State, Mackenzie Staich, 22, from Ohio, Aaron Moyer, 24, and Josh Stoneman, 26, from Kentucky, were in Penang as part of a Christian mission trip called The World Race.

“We have been to India, Nepal, Cambodia, Thailand prior to Penang and after this we’re heading to Botswana, South Africa, Swaziland, Dominican Republic, Haiti, and Jamaica.

“This is our first time to Penang and Malaysia and we are loving our time here,” said Leffelman, who was a teacher before joining the mission trip.