Visitors looking on the miniature model of a tin mine at the inaugural Tin Mining Festival held at the Kinta Tin Mining (Gravel Pump) Museum in Kampar.

THE heyday of tin mining was revisited and proudly celebrated during the inaugural Tin Mining Festival in Kampar.

Held at the Kinta Tin Mining (Gravel Pump) Museum last Sunday, the festival saw Perakians from all walks of life come together to remember the sacrifices and deeds of those who helped build the industry and subsequently, the major towns in the Kinta Valley.

Taking attendees on a stroll down memory lane, All-Malaya Chinese Mining Association president Choong Tien Chuan said Chinese labourers migrated in droves to the Malay Peninsula after the discovery of rich tin deposits in Larut and later, in the Kinta Valley, in 1877.

“The nett increase of total Chinese migrants to the Malay Peninsula between 1877 and 1899 was 2.64 million people. There were two avenues for sailing to the Malay Peninsula. One was for the migrants to pay for the journey themselves and in that way they were not subjected to any obligations or conditions imposed by anyone, and were free to pursue any career or business.

“However, many poor migrants were without financial resources or connections and had to resort to the services of middlemen, who would approach miners or recruiting agents to advance the 32 straits settlement dollars as wages.

“Each recruit would then have to enter into a written agreement with the employers, under which they will be employed for a duration of one to three years at a fixed wage,” he said. 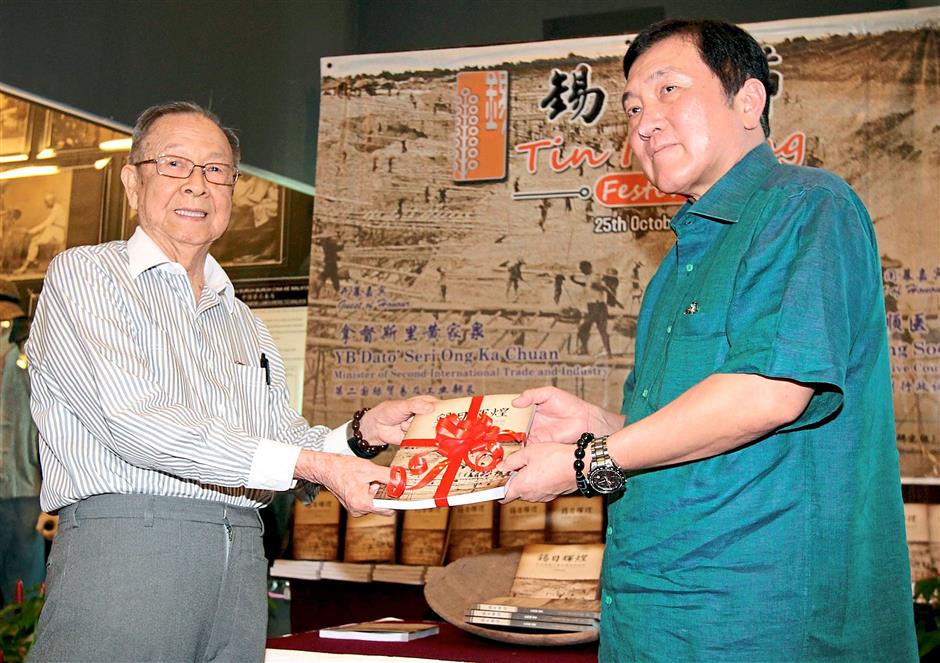 Hew (left) presenting a copy of his latest book The Glittering History of Gravel Pump Mining Industry to Ong (right), who launched the book during the inaugural Tin Mining Festival at the Kinta Tin Mining (Gravel Pump) Museum in Kampar.

Choong said the advance payment for the passage was in effect the price of bondage under which the worker could be exploited in inhumane ways.

But despite their low pay, which was barely enough for haircuts, tobacco and cigarettes, after the repayment of their passage and allowances drawn in advance, quite a few freed themselves from the shackles of debt bondage to start their own tin mines.

“According to a census taken in 1903, a total of 35% of all tin mine workers were employed under the slavery system, which was eventually abolished by the British in 1914,” he said.

From 1850 onwards, more and more Chinese were engaged in tin mining, and so were the Chinese triads.

“In 1862, the Larut War became the most violent and bloody war in the history of tin mining. It is estimated that the war resulted in more than 4,000 deaths between 1872 and 1873 alone.

“The British later intervened and mediated between the warring triads and the Malay stakeholders. All wars were officially ended with the signing of the Pangkor Treaty in January 1874,” Choong said.

The Europeans, he said, later came into the picture using mechanised tools and equipment to dredge tin. Hew’s latest book The Glittering History of Gravel Pump Mining Industry was launched during the festival.

“They worked on vast areas of rich reserves, especially earmarked for their exploitation by the British colonial government.

“On the other hand, the Chinese miners had to improvise and innovate so as to mine deeper than the usual surface deposits. Thus, various pumps for water and gravel were introduced and gradually powered by engine and electric motors,” he said, adding that the recovery process was improved by the introduction of the palong.

The local tin mining industry, he went on to explain, had always been dominated by small-scale operators employing gravel pumps and open cast mining methods although the general perception among those outside the mining fraternity was that the efficiency of mining alluvial tin was greater, in terms of volume and cost, by way of dredging.

“Gravel mining, after being perfected over its long history, was found most suitable for recovery of alluvial tin deposits between limestone pinnacles and crevices which could not be recovered by dredging. And as more and more dredged out land was made available for gravel pump mining, the proportion of gravel pump output began to increase.

“By 1965, the combined output of gravel pump and open cast mines accounted for 51% of the country’s total production.

“Thus, the small-scale operators – the gravel pump miners – provided an immeasurable service in recovering supposedly abandoned mines with rich tin deposits which would otherwise be permanently buried forever,” he added.

Choong said there was another interesting aspect in the gravel pump industry – dulang washers.

Exclusively female and mostly of Hakka descent and illiterate, gravel mine owners would engage their services to look for tin trapped between boulders, rocks, corners and crevices, before a mine was abandoned.

But alas, on Oct 24, 1985, tin prices fell beyond the RM29.15 per kg minimum price agreed in the International Tin Agreements (ITAs), marking the collapse of the country’s tin mining industry.

“But more than doing so for sentimental reasons, this festival serves to educate the younger generation about how tin mining helped build the country’s infrastructure back in the days when we had just gained independence.

“Hopefully, the festival will be endorsed by the Tourism Ministry and will be included in Malaysia’s tourism calendar,” said Ong, who during the event also launched Perak Chinese Mining Association adviser Tan Sri Hew See Tong’s book The Glittering History of Gravel Pump Mining Industry.