Honouring the best of retailers

Themed “Autumn Reunion”, the event was held to commemorate the association’s milestones and successes achieved over the past 23 years.

The association started out as a humble association and grew into a major and influential force in the retail industry, with visionary leaders at the helm.

“The theme represents the fall of the leaves which symbolises the fall of old ways and then spring comes, bringing new life and new business.

“Considering the state of global economic uncertainties we are facing today, we must also hold on to the belief that challenges will soon transform and change things for the better, just as how seasons constantly change,” said organising chairman Datuk Edmund Lee. 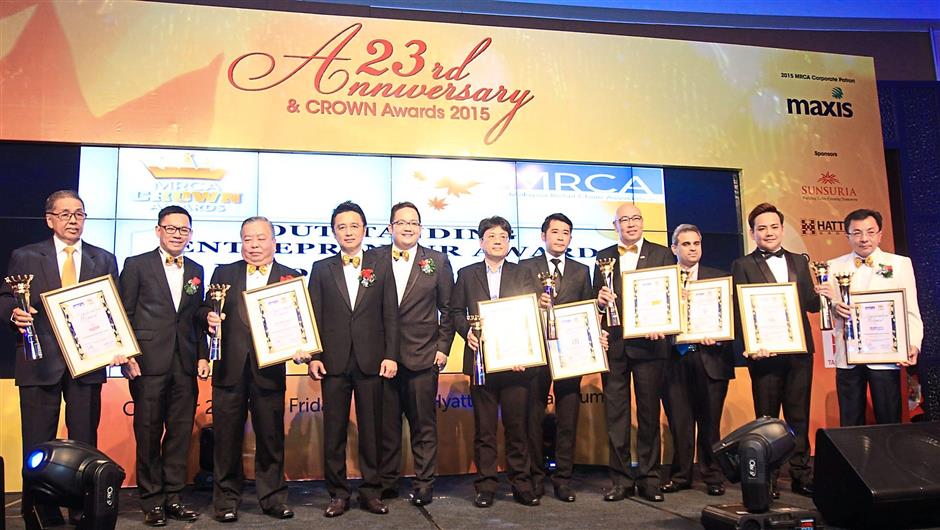 Liaw (second from left), Ter (fourth from left) and Lee with all the eight Crown Award recipients at the MRCA 23rd anniversary celebration and MRCA Crown Awards 2015, at Grand Hyatt Kuala Lumpur.

Guests were treated to entertaining dance performances followed by classic tunes from a live band to accompany the Chinese cuisine served.

Lee, together with guest-of-honour Associated Chinese Chambers of Commerce and Industry of Malaysia (ACCCIM) president Datuk Ter Leong Yap, MRCA president Datuk Liaw Choon Liang and other council members of the organisation took to the stage for the cake-cutting and toasting ceremony to mark its 23rd anniversary celebration.

In conjunction with the celebration, the MRCA Crown Awards 2015 was held for the second consecutive year.

The retail industry plays an important role as it contributes significantly to the employment market and the tourism industry, noted Liaw.

“In this context, our role is made more important to develop our members in line with the transformation of the Malaysian economy generally and retail industry specifically.

“It is our hope that through this awards, all of us will be driven to push our boundaries and strive to achieve excellence in retail business, to ensure that the retail industry remains vibrant and profitable,” said Liaw.

The MRCA Crown Awards were created to cultivate excellent business practices, enabling participating retailers to challenge and enhance their competitiveness to be on par with global retail players in an industry that is changing at a rapid pace.

At the same time, the objectives of the awards are to promote and recognise the achievements and contributions of participating retailers in the retail industry.

“We ventured into 10 countries within a relatively short term of five years, and we are looking at another two more countries next,” said Valiram Group executive director Sharan J. Valiram, adding that the achievement resulted in winning the award.

“MRCA plays a significant role in pooling together resources and strength of over 280 chain retailers and franchisors for networking, sharing business strategies and innovative ideas while facilitating the enhancement of chain stores management through education and training.

“With a contribution of 12.7% to the country’s GDP, the wholesale and retail industry accounts for a significant share of Malaysia’s economy.

“The Economic Transformation Programme (ETP) Annual Report 2014 forecasted the wholesale and retail trade to grow by 7.1% in 2015 and this shows that the Malaysian economy is still growing positively which is a good sign for all of us.

“We look forward to working closer with MRCA for the benefit of our members in the business communities,” said Ter.