DEALING with evening peak-hour traffic is a daily nightmare for those working in the Phileo Damansara area.

Every day, thousands of motorists get stuck in bumper-to-bumper traffic outside Phileo Damansara, along Jalan 16/11, and within the commercial centre itself.

The non-tolled road congestion starts from 5pm and even those heading to Jalan Dato Abu Bakar via the ramp are not spared the ordeal.

The horrendous traffic snakes all the way to the NKVE Damansara Toll Plaza as well as the Damansara-Puchong Expressway (LDP), leaving the roads looking like huge carparks.

It worsens when there is a downpour.

Office workers in Phileo Damansara 1 and 2 have to deal with traffic build-up right from the basement carpark and it can take up to an hour to get past the boomgate, to be faced with more vehicles on Jalan 16/11.

I, too, am victim of this critically clogged-up road and am forced to sit in traffic for up to two hours despite living only 3.7km from the office. 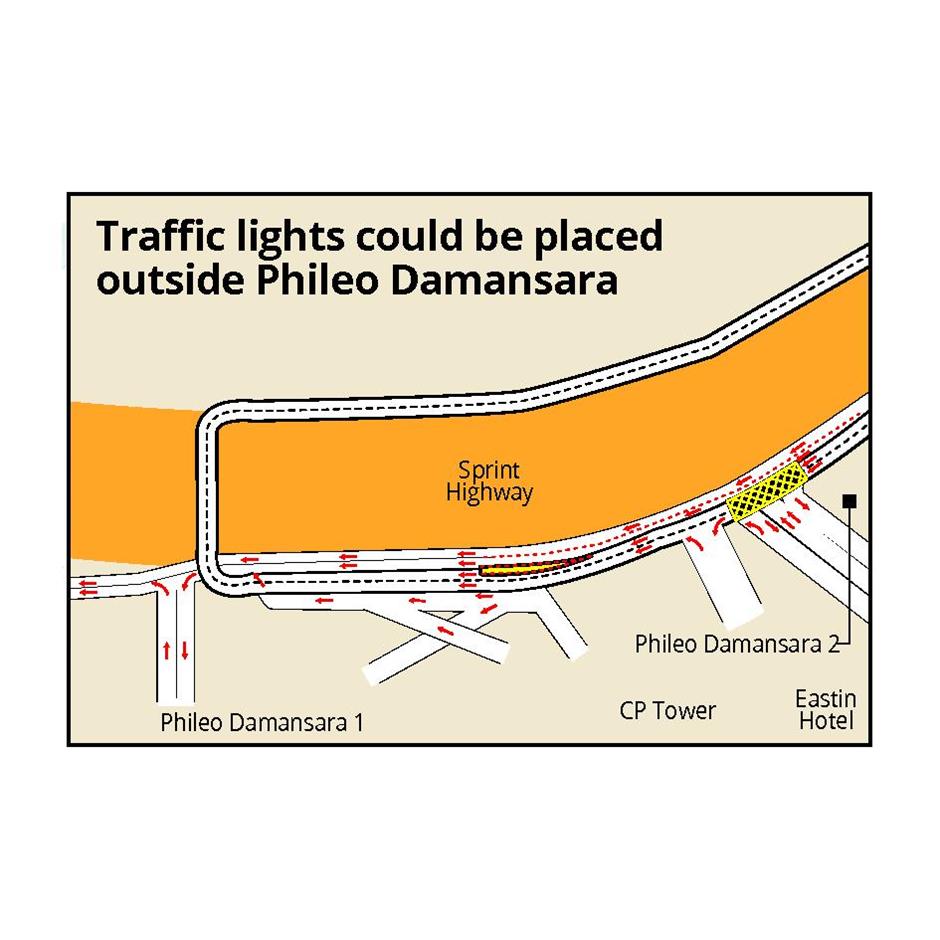 
Motorists blame it on the timing of the traffic lights at the junction of Jalan 16/11 and Jalan 17/1, saying it has been shortened.

Based on StarMetro’s observation last Friday, the green time was about 60 seconds and only an average of 32 cars could pass the lights before it turned red.

We spoke to motorists stuck in the congestion along Jalan 16/11 at 7.30pm.

Hilmi Mohd Said, 27, was heading to Taman Tun Dr Ismail from Universiti Malaya Medical Centre -- a 10km journey -- had been stuck outside Phileo Damansara for 45 minutes.

“This is nonsense,” he said.

Wan Wei, 37, an insurance agent working at Phileo Damansara 1, said it took her almost two hours to reach the boomgate from the carpark.

IT audit manager V.Mani Mekalai, 39, wants the city council to intervene fast and provide a solution.

“I am heading to Ara Damansara. I was not in a hurry so I did not take the tolled road but I saw that even the tolled highway is congested,” she said.

Nathan Manikam, 31, who commutes between Kuala Lumpur and Klang, said in his experience the congestion outside the Phileo area sometimes started as early as 4pm.

“This was even before the announcement on the toll increase.”

He said it was common to spend 45 minutes just inching along Jalan 16/11.

“With the hike in the toll rates, I wanted to avoid using the highway so here I am, stuck in the congestion,” he said.

The Star Media Group employee Kow Guan Sin, 36, said the congestion had caused him to be late on many occasions in fetching his children from school and daycare. He blamed the traffic light at the intersection between Jalan 17/1 and Jalan 16/11 as the main culprit.

“I did my own survey last week and found the traffic lights stayed green for only 30 seconds.

He said a staff member had even lodged a report with the Petaling Jaya City Council (MBPJ) over the matter.

Traffic often builds up along the ramp from Jalan 16/11 to the Jalan Dato Abu Bakar traffic light intersection.

This, he said, had caused motorists to be trapped in the Phileo Damansara area.

Len suggested barring traffic on Jalan 16/11 from turning onto Jalan 17/1 near Astana Damansara, and removing the set of traffic lights there.

“The intersection between Jalan 17/1 and Jalan 16/11 needs to be restudied.

“Reducing the number of turnings will help.”

At present, there is a traffic light turning which enables motorists to turn right from Jalan 17/1 into Jalan 16/12 leading to Jalan 16/15.

Muniandy recommended that the fork at this junction be removed and only allow traffic from Jalan 17/1 to join Jalan 16/11.

“This way, the two-lane road will merge directly with Jalan 16/11.

“This can be done by removing the island and only allow vehicles to exit left into Jalan 16/11 because the volume of vehicles coming from Jalan 16/15 and Jalan 16/12 is much lower.”

“There are alternative routes for residents here.

“However, they might object but the council and relevant authorities should look at the greater good for the thousands of affected motorists,” he reasoned.

Another improvement he suggested was to install traffic lights and proper road markings.

These, he said, should be placed at the entry/exit of Phileo Damansara / Eastin Hotel Petaling Jaya/CP Tower junctions.

“There are too many cross-weaving bottlenecks for those exiting and entering.

“It causes a massive hold-up during the evening rush hour,” he noted.

“I believe if there are neat road markings, motorists will keep to their lanes,” he added.

Muniandy said cars should also be prevented from waiting and double-parking along Jalan 16/11 as well as the U-turn ramp.

He also urged authorities to carry out a long-term traffic impact assessment.

He said based on their observation, vehicles were not able to move forward due to the backlog of traffic.

“Only 40 seconds of the time are utilised,” he said, adding that the main source of the problem could be linked to the bottle-neck at the flyover near Centrepoint.

“The tailback of the congestion is all the way from the NKVE Damansara Toll,” he said.

He added that changes to remove any of the traffic lights would require consent of the residents.

The highway concessionaire, he said, would have to work with the local authority and relevant parties over the matter.

He said there was a proposed development on a piece of land, beside the Phileo area, and MBPJ was looking at the findings of the traffic impact study before approving the project.

“We will see how we can address the traffic problems there based on the study,” he said.