VEGETARIAN burgers and pizzas have become popular addition to the Nine Emperor Gods Festival’s diet over the years.

They appeal to the younger generation and sold like hotcakes at several makeshift vegetarian stalls lining the streets in Penang.

“When you think of a vegetarian burger, normally you won’t have high expectations.

“But I am pleasantly surprised with this,” she said, referring to the wholemeal charcoal burgers.

Her sister Olivia, 20, said it was a smart idea to sell wholemeal charcoal burgers during the fest.

“Our generation now wants something different from the usual rice or noodles.

“I have eaten non-vegetarian charcoal burgers before, but I did not expect to see it here during the festival,” she said when met at the makeshift stall in Taman Lip Sin yesterday.

Popularly known as Kew Ong Yeah among the locals, the festival began yesterday, which was the first day of the ninth lunar month.

During this period, Chinese Taoists observe a strict vegetarian diet for nine days.

Several streets on the island have been turned into fairgrounds as makeshift vegetarian stalls, decorated with yellow flags and buntings, sprout up for the annual festival.

Stall operator Daniel Koh, who claimed to be the first person selling wholemeal charcoal burgers during the festival, said charcoal buns were easy to digest.

“We used to sell normal vegetarian burgers before a friend told us to try something new – wholemeal charcoal burgers.

“The buns are healthier and easier to digest.

“It will go with our homemade black pepper powder to give the burger the extra zing,” said the 24-year-old trader.

“Getting pizzas during this period of time is considered an indulgence.

“We have other stalls on the island offering such delicacy during the celebration,” he said.

At the Kuan Yin Si Temple in Burmah Road, hundreds of devotees made a beeline to the 85-year-old temple in conjunction with the festival.

Hairstylist Lisa Chung, 31, came all the way from Taiping, Perak, with her family members to offer prayers at the temple.

Chung said they always visited different temples each year during the celebration.

“We decided to take a drive down here after learning the efficacious element of the temple in granting wishes.

“We come here to pray for good health and a prosperous year ahead,” she said.

Temple secretary Kang Chin Hup said preparation for the festival started weeks earlier as they had to clean the temple and prepare crockery for food to be served to devotees during the celebration.

“We serve food throughout the day to devotees as well as the needy during this time.

“We have also put up nine oil lamps on a tall bamboo tree during the celebrations from 7pm to 5am to signify the presence of the gods,” he said. 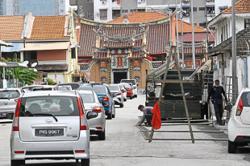 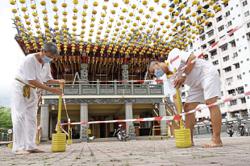