Winding your way to safety

A car being winched up a steep incline. Notice how bystanders are standing well away from the winch cable.

IMAGINE you are caught in a logging trail with heavy rain for the past two hours.

As you go over a slight rise, you drive straight into a dip filled with knee-high mud.

As you try to power through, your wheels lose traction and you end up spraying mud all over the place. You are stuck.

You and your co-driver (yes, you should not be driving alone in conditions like this) exit your vehicle to wade through the mud and take stock of the situation.

Scenarios like this are common when you drive off the beaten track in Malaysia.

What was once a nice solid laterite road can almost immediately turn into a hellish soup of muddy porridge once it starts raining.

The number one tool a driver has to have in his vehicle if he is bogged down with this problem is the humble winch. 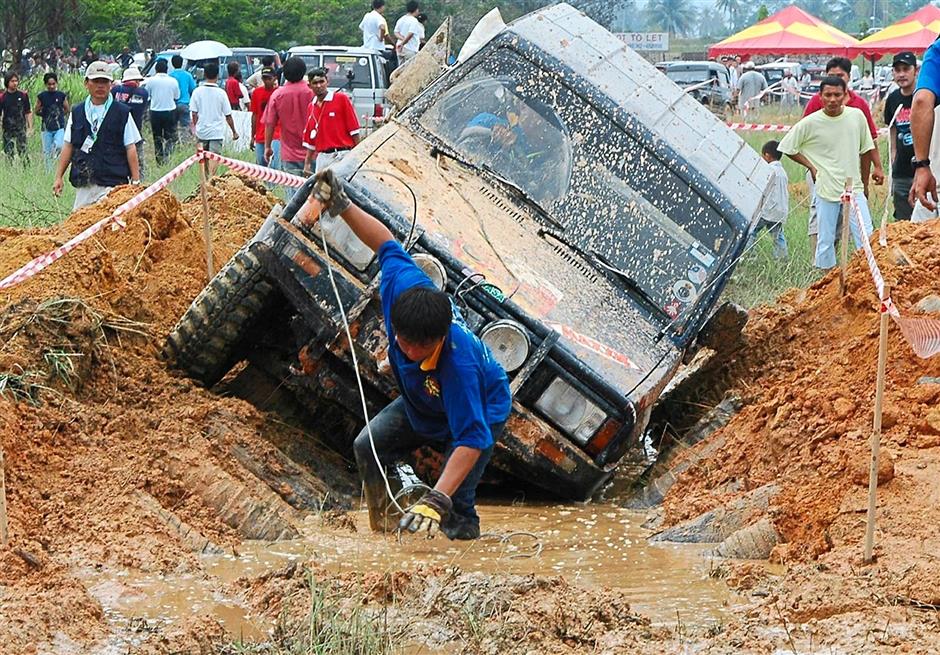 A co-driver, also known as the 'winchman' pulling on a vehicle's winch cable as he makes his way to an anchor point during a competition.

Both have their pros and cons; so what might work for you may not be someone else’s cup of tea.

Basically a winch is a length of cable with hook which is wrapped around a powered drum usually mounted onto the front of your car, though some folk will attach another on their vehicle’s rear.

Electric winches get their power from your truck’s batteries whereas mechanical winches are powered by your vehicle’s engine.

There are several different types of mechanical power take-off (PTO) winches (to use its full name) but all use a special detachable shaft, called a PTO shaft, which hooks up to your gearbox to gain power.

If the winch is used incorrectly, it can cause significant damage to your gearbox.

Another drawback is that you have to seriously modify your gearbox to attach one to your vehicle.

This makes it illegal to use your vehicle on the road if you have not gotten the necessary approvals from the Road Transport Department.

Saying that, mechanical winches are both very effective and hardy.

A friend of mine once had his gearbox fail while we were out on an extreme trip in the Main Range last year.

Luckily, his reverse gear still worked so it was not completely dead in the water. He and his two co-drivers had to winch their truck from anchor point to anchor point in reverse for almost 90km over extremely challenging terrain.

Had he been using an electric winch, it would be highly unlikely that he would have been able to make it out as it most likely would have burnt out from the stress.

Bottom line is, mechanicals make for a good winch if you are competing or going on extreme trips. It might be overkill however, if you only use your vehicle for lighter uses like camping or getting yourself to that hard-to-reach fishing pond.

For that, a good electric is all you really need.

Going back to our previous scenario, your co-driver and you have discussed options and reached a consensus to winch your way out of this mess.

After checking out your surrounding, you find a tree placed conveniently near to your truck which is strong enough to make an excellent anchor point for your winch.

Thus you plug in your winch’s control box and head back to man the steering wheel while your co-driver unhooks the winch cable.

While you are reeling out your winch cable, your co-driver guides it to the anchor point, making sure to keep the cable tangling by keeping it taut.

Once he reaches the tree, he first wraps a tree trunk protector around it which he then attaches to hook with a shackle.

The tree trunk protector is like a broad belt with two loops at either end. Seeing that trees are living things, wrapping a cable around it directly would most likely kill it once you start reeling in your winch.

With a hand gesture, your co-driver signals you to reel in a bit of the cable to tighten it further.

He then throws a winch damper over the cable before heading back to your vehicle.

A winch damper is a weighted sleeve which helps prevent the cable from recoiling if it were to snap.

There are two types of material winch cables are made from; steel or synthetic fibres.

Steel cables are exceptionally strong but they are hazardous to work with.

You have to wear gloves when you handle them as frayed cables will readily cut up your hands.

Furthermore, with the high forces involved when winching, if these cables were to snap while you are winding it in, they could literally cut the limbs off anyone standing in the way of the recoil.

Thus, a damper is used to stop the recoil. That is also why you never stand anywhere near a winch cable if it is being used.

Synthetics though, do not have this problem as they just fall to the ground if they snap.

They are also exceedingly light when compared to steel. They are, however, very expensive and easy to steal.

Once your co-driver is in front of the truck, he then guides you to reel in the cable further.

With a few strategic taps of the accelerator, you slowly free your vehicle.

Winches are an important bit of kit to have as an off-roader and is usually the first big purchase one would make once you are deeply into off-roading.

Not only is it a very versatile tool to recover vehicles, it also opens up new territories for you to explore.

Areas which were once too hazardous to enter now become a doable challenge as you know there is a chance to save your vehicle if you get stuck.

It lets you help out fellow drivers on the trail either by rescuing them when things go south or by assisting them up a steep hill.

As with most things though, added advantage brings added risk as well so it’s best that if you decide to get one for your vehicle, make sure you are trained to use it.