Joint effort: The students with the mudballs before throwing them into the river. — Photos: SAIFUL BAHRI/The Star

The mud balls were made from red earth, EM treated rice-rinsed water and fermented organic matter. Once rolled together and thrown into the water, the mud balls, containing healthy enzymes and fungus, area said to break down harmful bacteria and improve river water.

Before the mud ball production workshop took place, the students were taught the importance of conserving rivers by UPSI lecturer Dr Husni Ibrahim.

School principal Juahir Mohd Hassan said the school undertakes an environmental project like this every year.

“Last year, we worked on a composting project. This year, we met with UPSI to form a partnership, and they gave us the idea to work on ways to clean rivers. 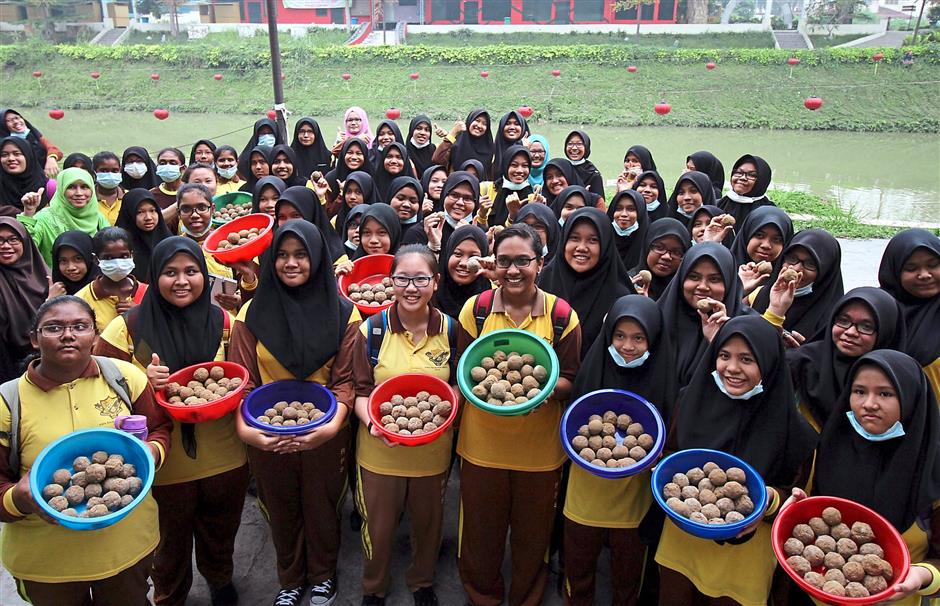 Joint effort: The students with the mudballs before throwing them into the river. — Photos: SAIFUL BAHRI/The Star

“We wanted to hold the project at a well known area, so we picked Sungai Kinta because it is the main river flowing in the city,” she said during the project held at the Sungai Kinta Riverfront area near D.R. Seenivasagam Park on Sunday.

Juahir hopes that after their project, the river water will be cleaner, allowing aquatic life in the river to grow.

Among the participating students was Form Four student Mok Shue Yee, who said she had fun during the project that started at 7am despite hazy conditions.

“I was a bit worried at first, but after wearing a mask, it wasn’t so bad in the end.

“We learned so much today, especially on how we should always take care of our rivers and not simply throw rubbish in them.

“I hope our mud balls will help the river,” she said. [In they go: It is hoped that the mudballs will help improve the water quality of a section of the river near the D.R. Seenivasagam Park.

“One person’s irresponsible act could affect us all, just like the current haze that’s happening in the country.

“Although what we did today with mud balls is just a small act, I hope we could help make a difference in cleaning the river,” she said.