Chefs show how convenience food can be turned into hearty meals Kicker: (From lef) Anis Nabilah assisted by Pacific West development chef Eddie Goh and branding support executive Paul Loo, giving visitors a taste of just what they can do by switching up the Smokey Salmon in Peppercorn Sauce.

Anis, who began her culinary adventures at the age of nine in her mother’s kitchen, demonstrated Asian-influenced recipes based on home-cooked simplicity.

“The experience I gained from the 2005 and 2007 FHM Culinare cooking contests made me a lot more daring to try new recipes.

“It is all about pushing boundaries and experimenting with new flavours,” she said, encouraging others to do their own experimentation with the products.

Creating a filling Szechuan-inspired dish out of the conventional Smokey Salmon in Peppercorn Sauce, it is coated with black pepper, sesame seeds and chilli flakes for a hit of spiciness then pan-fried.

The fish is then laid on a bed of cold Korean glass noodles that is tossed with crushed Szechuan pepper, sweet soy sauce, a dab of sesame oil, peppercorn sauce and sprinkled with edamame.

Another easy-to-cook dish Anis recommended was a change-up on the Dusted Baby Squids, making it over into the instantly recognisable salted egg squid that took all of 10 minutes to make.

“Salted egg squid is definitely one of my favourite dishes to make.

“It’s so tedious when you make it from scratch, but using this (ready-to-cook seafood) makes life so much easier.

“The unique thing about Pacific West’s smokey salmon is its flavour; of course it’s nice to be enjoyed as it is but I wanted to show what else one can do with it and the variety of ingredients one can use with it,” she said.

Edson, who started as a chef in London, on the other hand, used his more than 26 years of experience to develop Westernised flavours that complement Pacific West’s Cheezy Fish Fillets and Dusted Baby Squids.

Cooking the products without the need for defrosting, Edson chose to demonstrate recipes that would fit perfectly in professional and home-cooked settings.

“I have come up with recipes and ideas that match these products.

“With the Cheezy Fish Fillets, for example, I decided on a wild mushroom risotto that is normally or traditionally served with cheese or Parmesan.

“I thought the Australian Cheddar cheese in the Alaskan Pollock fish fillets would be a good combination that added creaminess to the risotto.

“The dusty texture on the baby squids went well with a more refreshing Mexican salsa; it’s quite versatile because it can be used as a tapas, an appetiser or stuffed in tortillas,” he said.

The four-day exhibition was held at Kuala Lumpur Convention Centre, ending on Oct 2, with 1,200 Malaysian and international companies participating.

A total of 12 buses – six buses in the Klang Valley, and three each in Penang and Johor – are decked with images of Pacific West products.

SPAD will be regulating the advertisement visuals to ensure they abide by regulations.

With School Buzz, the advertisement can now go on about 15,000 school buses nationwide. 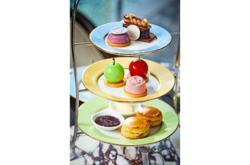