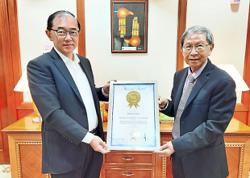 1 VIPs and guests looking cheerful as they celebrated Hari Malaysia by singing ‘Jalur Gemilang’ after the 20th anniversary cake-cutting ceremony. 2 Ooi (left) showing guests the model of the Museum of Achievers. With him are, among other guests, Hamzah (second from left) and Tio (right).3 (From left) Tio, Ooi and Hamzah showing the Malaysia Book of Record coffeetable book.4 An impressive show by Loo, the record holder for the most number of costumes changed in one minute.5 Chee, the first female magician to receive the prestigious Merlin Award-USA playing the ‘angklung’.

MALAYSIA Book of Records (MBR) founder Tan Sri Danny Ooi surprised guests when he announced at the 20th anniversary celebration of the company that he would take a back seat.

In his speech at the anniversary dinner in Sunway Resort Hotel and Spa, Ooi thanked those who had supported him over the years.

“Besides the Guinness World Records, there are fewer than 10 countries in the world that have their own book of records and I am proud to announce that our very own Malaysia Book of Records has been operating more successfully than those countries. 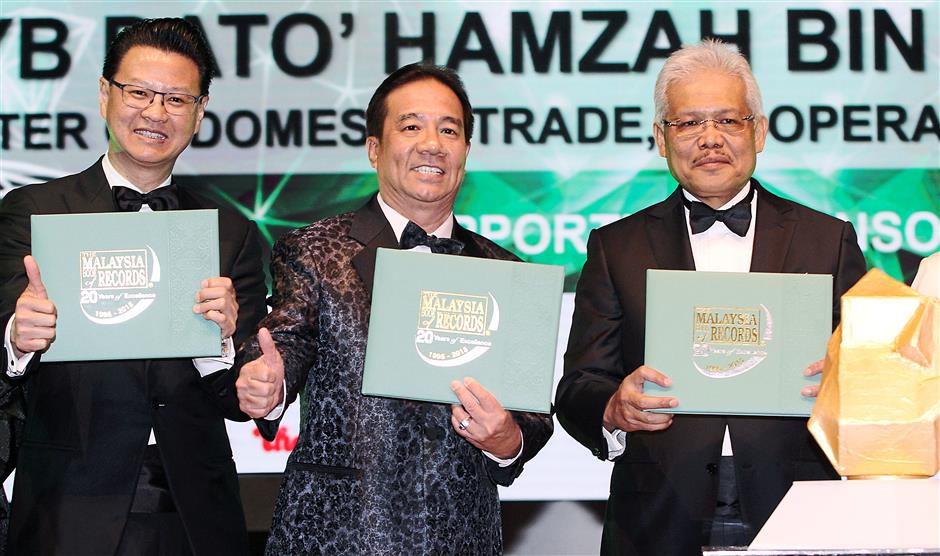 “To sum it up, it is about passion, persistence, perseverance and at times, patience. That is why not many countries are into this record-keeping business.

“Even the Guinness World Records was amazed at the success of the MBR when I visited them in London last May,” he said.

Ooi said the idea for MBR was first conceived in 1989 but only came to fruition six years later.

He recalled the struggles they faced initially, such as the RM800,000 capital lost within 18 months and how he had to soldier on alone after his partners quit. Ooi (left) showing guests the model of the Museum of Achievers. With him are, among other guests, Hamzah (second from left) and Tio (right).

Ooi and MBR have come a long way since then. Over the years, nine editions of the MBR book have been published. The 10th edition will be published in April next year.

Before the event started, Ooi showed VIPs, including guest-of-honour Domestic Trade, Cooperatives and Consumerism Minister Datuk Hamzah Zainudin, the model of the MBR Museum of Achievers.

“I hope the final dream, the museum, will be a reality soon,” he said during the launch of the MBR coffeetable book.

Many past record holders attended the dinner and some also showcased their talents on stage. An impressive show by Loo, the record holder for the most number of costumes changed in one minute.

Guests had their focus on Pinky Loo, record holder of most number of costumes changed in a minute, as she changed into several costumes within a blink of an eye.

Many showed off their musical prowess, such as the youngest Indian artiste to release a Malay album, Prabu Sritharan, youngest violinist to release an album Koay Zhi Tong, first artiste to record 1Malaysia songs album in six languages Iqhwal Hafiz, youngest Golden Horse award nominee Crystal Lee, and first singer to have a song on the British charts Dasha Logan. Some are multitalented such as Jorynn Chee, first female magician to receive the prestigious Merlin Award-USA, who played the angklung on stage with her siblings.

Not to be outdone, the event’s emcee Datuk Mahadzir Lokman, who is known for his multilingual ability, sang a Chinese song. 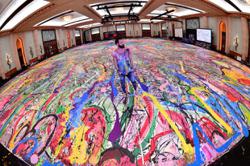