A tale of a doctor and a misspelled street name

PENANG-BORN Dr Wu Lien-Teh is a medical legend known the world over.

He was the first medical student of Chinese descent to study at the University of Cambridge and first Malayan Chinese to be nominated for a Nobel Prize in Medicine.

He is also recognised as “The Plague Fighter” for successfully combating the pneumonic plague in Manchuria, which claimed 60,000 lives between 1910 and 1911.

But while Dr Wu is recognised internationally, he is almost forgotten by those in Ipoh where he had run a private medical practice for over two decades and helped set up the Perak Library (now the Tun Razak Library), as well as donated towards the Perak Chinese Amateur Dramatic Association building fund.

It is equally unfortunate that a road named after Dr Wu at Taman Hock Lee in Ipoh is misspelled.

One resident, Allan Chong Yong Seng, 74, said the road had read “Jalan Wu Lean Teh” for as long as he had stayed there.

“I moved here over 40 years ago and I’ve not been aware that it was spelled wrongly until recently.

“I feel that it is only right that the Ipoh City Council rectifies the mistake as every person’s name should be spelled correctly.

“To let it continue to be spelled wrongly is to dishonour him,” said the retired civil servant.

According to author and local historian Dr Ho Tak Ming, the world’s medical history would have been very different had it not been for the distinguished scientist’s role in combating the plague in Manchuria.

“He had correctly diagnosed it as a pneumonic plague and not a bubonic plague.

“With his training as a bacteriologist in Cambridge, Dr Wu formulated a plan, which included ordering the bodies of those infected to be cremated, and managed to confine the epidemic within China.

“For this, the entire world was very grateful as it had managed to avoid a pandemic similar to the Black Death, which had wiped out a quarter of the European population back in the 14th century,” said Dr Ho.

The Black Death has been recorded as one of the most devastating pandemics in human history, resulting in the deaths of at least 75 million people from 1346 to 1353.

Dr Ho, who has written about Dr Wu in the book “Doctors Extraordinaire”, said rather than perpetuate the mistake, the council should correct the misspelling of the road named after Dr Wu.

“No doubt a small mistake, it’s still a mistake,” he added.

Similarly, the Dr Wu Lien-Teh Society is calling for the road signs along the road to be changed based on the same premise that a person’s name should be properly spelled.

“The last time members of the society visited the area, we also noticed that one of the road signs had faded.

“We hope the council will make the necessary changes and upgrades,” said Clement Liang, the society’s treasurer.

Retired council health inspector Lee Hock Mee, 73, who although is not a resident there, has also tried to help get the road name changed.

“I’ve lodged a complaint with the council in May.

“It later replied that the road name is correct and has been gazetted as such,” said Lee.

Jalan Wu Lean Teh is set against a tranquil neighbourhood occupied by mostly retirees.

It has a beautiful garden, which in fact is a children’s playground, that the Toi Shan Association hopes can be turned into a memorial park dedicated to Dr Wu.

The garden, with plants of different colours and pebbled walkways, is the hard work of resident Loke Hooi Hong.

The 75-year-old retired finance director had after his retirement in 1997, turned the rubbish laden playground into what it is today.

“There was rubbish in every corner.

“I started out by clearing the weeds and then planted azura and bougainvillea trees, which surprisingly flourished very well.

“As time went by, another two residents helped me out with the garden but one of them has since moved to Penang to look after his grandchildren while another has grown too old. He’s already in his 90s,” said Loke, who forks out his own money to buy fertiliser for the plants.

“You can say that this garden is an honour to Dr Wu,” he added.

Dr Wu practised medicine at 12, Brewster Road in Ipoh until the age of 80 when he bought a new house in Penang for his retirement. He died a year later on Jan 21, 1960.

In recognition of his deeds to the medical fraternity, bronze statues of Dr Wu were erected at the Harbin Medical University and Beijing University Hospital while in Malaysia, a housing area opposite his alma mater, the Penang Free School, is also named after him.

Meanwhile, in an immediate reply, the council’s town planning department director Zulqarnaian Mohamad promised to look into the matter.

“We will investigate and make the necessary changes if need be.

“The same was done at two other roads, one in Manjoi and another near the Sultan Abdul Aziz Recreational Park (Polo Ground), before this,” he said when met after the council’s full board meeting yesterday.

Zulqarnaian was, however, wary that some residents might complain if the council changed the spelling of the road as it would require them to change the address on their MyKad and other official documents. 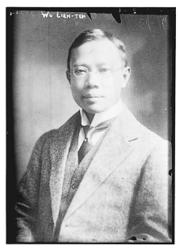 The good doctor from Penang