Group exercise: A group of people out exercising to ensure they stay fit and healthy.

The 74-year-old said daily exercise has made him feel and function better.

The grandfather said he went for daily morning walks at the park.

“I believe in exercising and keeping fit, because I don’t want to be a burden to anyone. 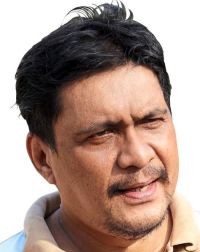 “Both my son and daughter are married, and they live out of Ipoh and have their own families to look after,” he said when asked how he took care of his health.

He said if the need arises one day, when he or his wife were unable to look after themselves, they would probably move into a retirement home.

“I don’t think I will want to move in with my children, and my wife is also not in a position to take care of the grandchildren due to her aches and pains.

“Exercise, eating well and enjoying life has helped me a lot,” he added.

Eugene was among some senior citizens interviewed on how people aged 50 and above were preparing for their old age, and whether they preferred to live in retirement villages or follow their children.

Tajul Ariffin Ibrahim, 52, said his wife and he would want to live nearby their son when they were much older.

The businessman said his 25-year-old son was still in university but when he decided to tie the knot, they would want him to live nearby.

Tajul said to ensure he was fit and healthy, he jogged daily before breakfast.

“After work, my wife and I visit my wheelchair-bound in-laws who live nearby daily.

“I am working hard now so that I will be able to have enough savings and be able to go on vacations later on, and as a Muslim, I must visit Mecca.

“I hope my son will take care of us later,” he said, adding just like how he and his wife were taking care of their elders.

Former broker Michael Tan, 67, meanwhile, said keeping healthy and saving for old age was something that he had never failed to do since young. He said besides the daily walking and exercises, his wife and he also participated in tai chi sessions.

Tan said he believed in continuing to lead a healthy lifestyle, and going on vacations overseas at least twice a year.

“We have a group of about 15 friends who we go travelling with.

“Both my children are working and living in Kuala Lumpur, and have their own lives and houses to look after,” he added.

Tan said it was really important not to have liabilities, and be able to manage finances properly.

He said retirees should not be greedy and go into get-rich schemes, as there is no such thing.

“The moment a person retires, and when they get their lump-sum gratuity, and Employees Provident Fund, people will come running to them, introducing various types of businesses,” he added.

The grandmother of eight said that without fail she would exercise every morning.

Thanaletchimi said jogging, walking and simple exercises have kept her going, and not forgetting her love for gardening.

“Besides exercise, cooking, running errands, and going on the treadmill daily at home helps me keep fit, healthy and positive as well.

“At the moment, with the grace of God, I am fit and healthy without any major illness.

“So hopefully I will stay that way, and not burden anyone as I grow older,” she said.

Her friend, retired staff nurse J. Pramavathy, 62, said as she grew older, she realised the importance of keeping fit and healthy.

The mother of two said she was glad that one of her sons was staying with her, while another was a chef in Australia.

“At the moment my husband and son are with me, so I don’t find life boring as I have them by my side.

“I jog, do housework, gardening and go for social gatherings to keep me going.

“Since I am diabetic, I educate myself, go for my appointments and take medications accordingly,” she added.