Drawn by lure of durians

2 (From Left) Mcnally, Johnson and Freitag tasting the durians at the park in Teluk Bahang.

DURIAN lovers can indulge in a thorny feast from now till Sunday at the Penang National Park.

The Homestay Durian Festival Penang 2015, held from 10am to 9pm at the entrance of the park in Teluk Bahang, boasts some 20 varieties of the fruit.

However, do keep a lookout for monkeys that are lured by the strong aromas.

They hang around the edge, scavenging for leftovers among the discarded husks.

Visitors with Hop-On Hop-Off bus tickets or Museum Adventure passes will get a 10% discount on the durians.

“We want to promote both the King of Fruits that Penang is famous for and unique homestay attractions here,” Dr Junaida said after launching the festival on Sunday. 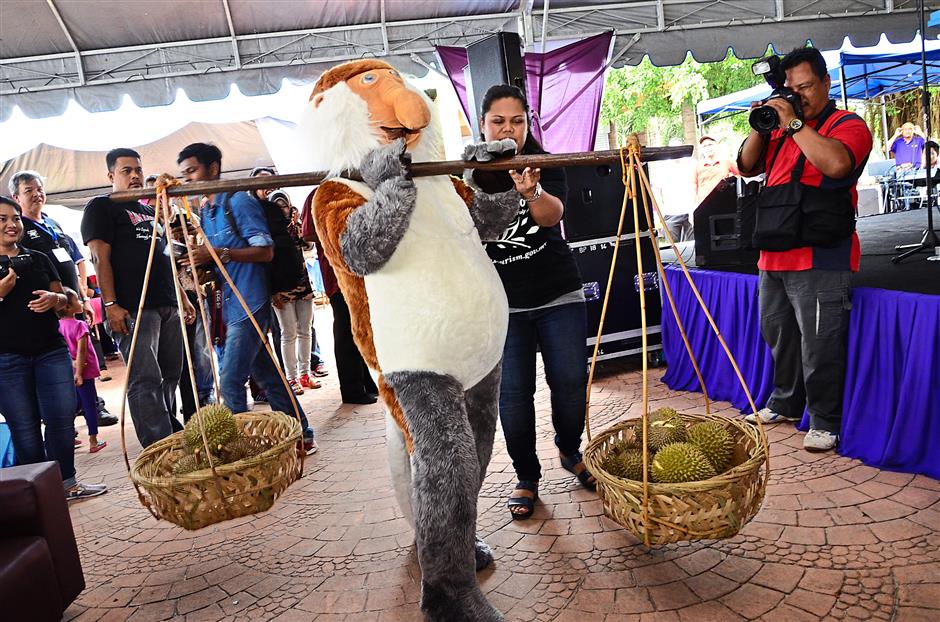 She added that 1,495 tourists had patronised Penang’s homestay lodgings between January and March, earning the operators some RM182,000.

Among the crowd at the festival’s opening were tourists Meghan Mcnally, Erica Johnson, and Alexandria Freitag, all aged 23, from the United States.

The trio encountered durians for the first time and had evidently fallen in love with the fruit, unlike other Caucasians who don’t find the strong aroma the least bit appealing.

“The pulp is sweet and smooth. I like the rich taste.

“It is so different from any other fruit I have eaten,” said Mcnally.

Over at the Balik Pulau Durian Carnival held at Anjung Indah in Balik Pulau yesterday, hundreds of visitors feasted on more than 500 durians and finished the fruits within half an hour.

They came as early as 8.30am to secure a spot to try out the durians, offered free for one day in conjunction with the launch at 10am. A large crowd helping themselves to the durians served with pulut and sugar at Anjung Indah in Balik Pulau.

Among those seen enjoying the king of fruits were Ahmad Johaniff Mohd Najibin, 37, his wife Rafidah Mohd Daud, 40, and their two children Muhamad Addib, five, and Nur Ain Naurah, three.

The family had come all the way from Butterworth to enjoy the fresh durians served with pulut and sugar.

“Although we can get durians from the mainland, the quality of the fruits is not the same,” said Ahmad Johaniff who obviously loved the island’s durians.

He found the island’s durians smoother and sweeter.

Penang southwest district assistant chief officer Syamsul Fitry Ahmad said a total of 11 durian orchard owners in Balik Pulau were taking part in the carnival, which is being held at Anjung Indah until September.

“Local and foreign tourists can satisfy their durian cravings here. We have booths offering various types of durians at attractive prices until the end of the durian season,” he told reporters after the launch of the carnival.

The event was organised by the Penang southwest district office and launched by deputy State Secretary (management) Ghazali Derahman.

Ghazali said durian prices had increased due to the insufficient supply to meet the high demand.

“This carnival is a suitable platform for durian lovers to find the best durians available before the season ends,” he said.