Tapping into the island’s rich culture

1 Performers telling the tale of The Love Story of Ma Lek the Warrior using wayang potehi.

THE public will be able to catch two puppet plays and a contemporary dance by some 30 young performers on Friday and Saturday which will, among others, depict stories on the older generation living in Chulia Street, Penang.

The performers, from as young as 13, will stage the shows from 8.45pm on both days in front of Yap Kongsi in Armenian Street, George Town.

They have been practising since March for the shows themed Wayang Time which is a project by Ombak-Ombak ARTStudio.

One of the performances is a wayang kulit (shadow puppet) play which tells the stories narrated of the older generation living in Chulia Street.

The other two performances are Kisah Cinta Pahlawan Ma Lek (The Love Story of Ma Lek the Warrior) to be performed via wayang potehi (traditional Hokkien glove puppetry); and wayang Koh Maak, a contemporary dance performed by people based on the story of Kampung Siam in Pulau Tikus.

The Love Story of Ma Lek the Warrior is about Ma Lek, a respected kungfu expert, who battles against the rich and evil Mo Qit Ho to save the beautiful Xiu Ying whom Mo kidnapped. Mo has the intention of marrying Xiu Ying by force.

A brief preview of both puppet plays were staged in front of an invited audience at The Star Pitt St. on Sunday.

The Wayang Time project is sponsored by Universiti Sains Malaysia (USM), ThinkCity and the state government.

USM ethnomusicologist Prof Tan Sooi Beng said the project was aimed at promoting, developing and training young people in the multicultural puppet traditions of Penang and the surrounding region.

“Our objective is also to enhance the interaction among young people of different races through musical activities,” Prof Tan said.

One of the performers, Atif Ismail, 19, said she had taken part in several projects by Ombak-Ombak ARTStudio since 2010. 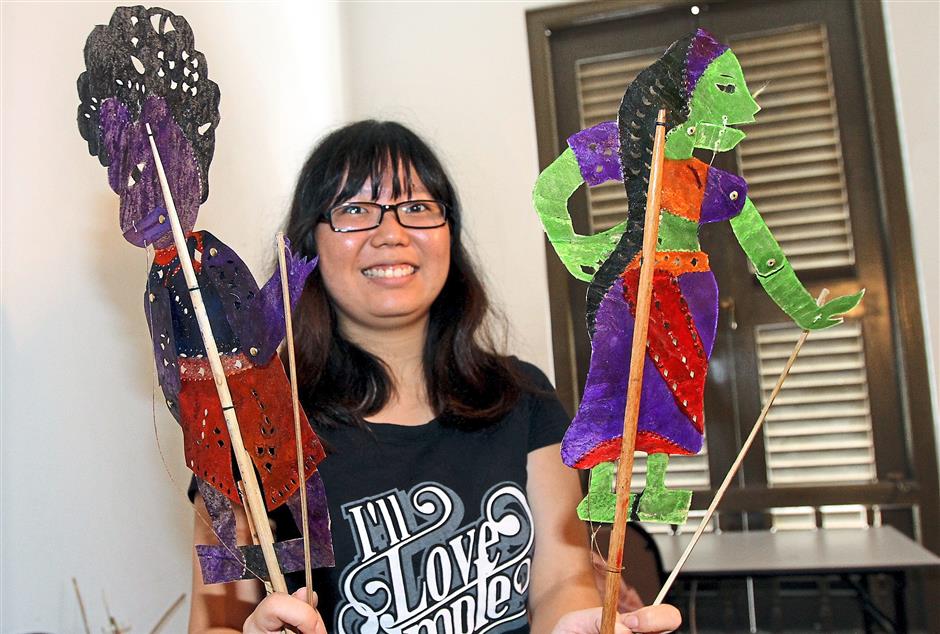 One of the performers showing the puppets to be used in Wayang Chulia.


“Embracing the art of puppet theatre was not easy. But along the way, we learnt about the multicultural heritage of Penang through music, movements and the research with the community we communicated with.

“We have to conduct research, interview residents, create storyboards and perform with the puppet characters,” she said.

Ombak-Ombak ARTStudio is a non-formal group of multi-ethnic artists and producers who mount contemporary performances, exhibitions and festivals which project Malaysian identity and creativity.

Admission for the performances in Armenian Street on Friday and Saturday is free.