1 Almost every tree and lampost in various housing estates in Klang have been vandalised.2 Klang Municipal Council enforcement chief Andry Arman showing the council’s store that is filled with illegal banners and posters that have been taken down.3 Stickers on various signage and public telephone booths make them unsightly.4 A parking meter is not spared. People cannot see the display because it is blocked by a sticker.5 The cruel irony is when even a clean-zone sign board is vandalised.6 Vandalised road signage make it difficult for visitors who are new to an area.

LOCAL authorities in Selangor are engaged in a “war” with loan sharks who are desperate to prey on the public by putting up their illegal advertisements at every nook and corner of the streets.

These illegal moneylenders, also known as Ah Long, have become bold and have no qualms about damaging public property when putting up posters and banners advertising their service.

The local councils have constantly been deploying their enforcement personnel to bring down illegal Ah Long stickers, posters and bunting on a daily basis.

The situation has become so bad that some councils had set up special squads tasked to remove the illegal advertisements.

Despite the council putting the heat against loan sharks, this has caused them to increase their frequency of pasting their illegal banners and stickers especially during the wee hours of the night.

Residents complain about the advertisements that are nailed to trees in their neighbourhood. 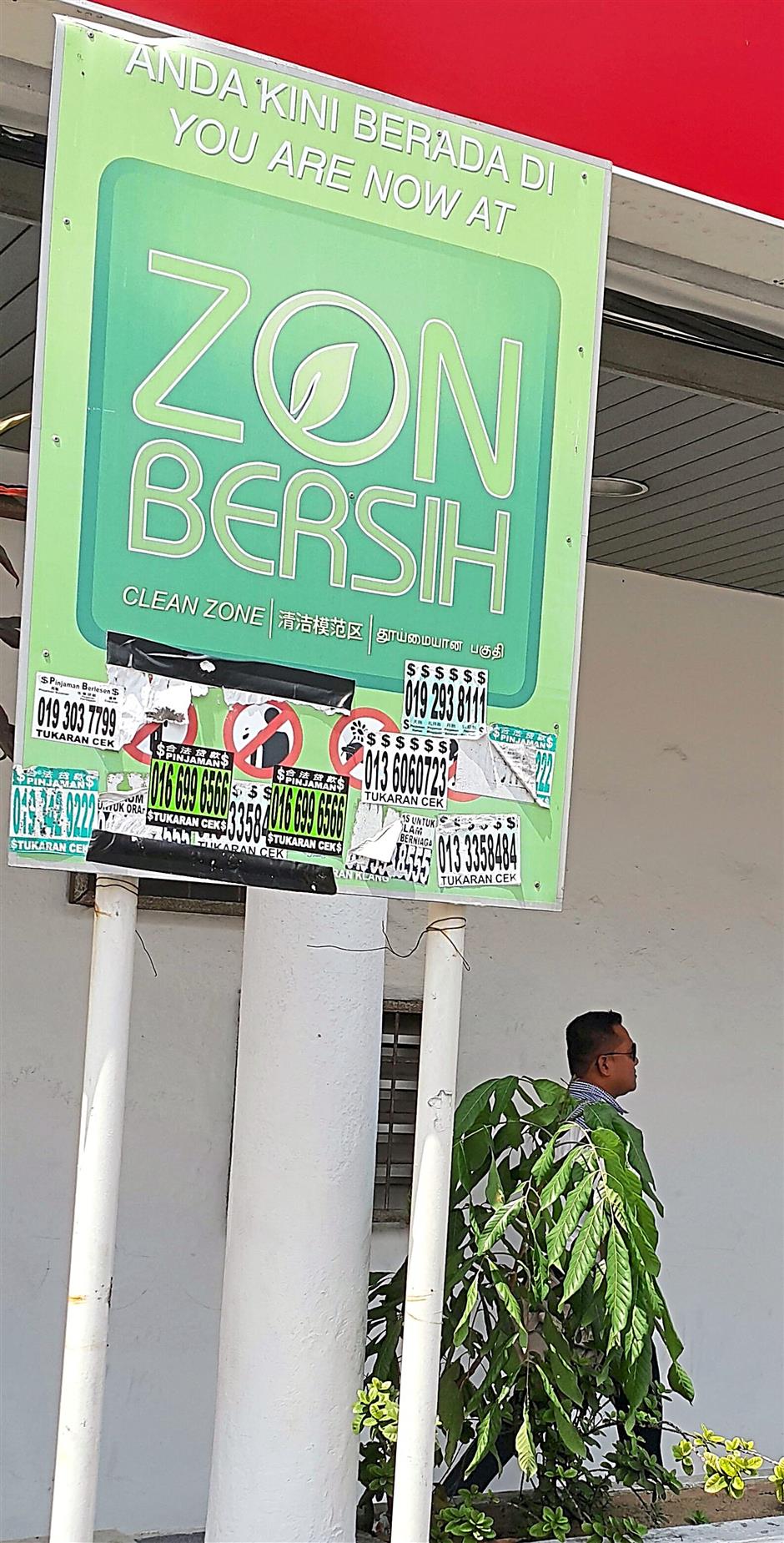 The cruel irony is when even a clean-zone sign board is vandalised.

“The Ah Longs are not only messing up our environment but are also painting a negative image of the country in the eyes of foreigners, especially tourists. I am surprised that no action has been taken against the culprits,’’ he said.

Bukit Jelutong Jalan Serambi Residents Association chief Datin Seri Ismalina Ismail said the illegal advertisements were a nuisance as they blocked the message on road signage which may result in road accidents.

“It can confuse motorists when they are unable to see the signage clearly,” said Subang Jaya USJ3/4 RT chairman Tan Yeng Yap, adding that the indiscriminate display of illegal advertisements did not reflect well on the moneylenders. Vandalised road signage make it difficult for visitors who are new to an area.

He said they should find a more professional method to advertise their business.

“It is very wrong to place advertisements on public property as taxpayers’ money is used to remove and repair the damages,’’ he said.

A check by StarMetro also found crime prevention signboards by the police covered by stickers.

Besides the negative impact on society, the illegal activity by the loan sharks also cost the local councils millions of ringgit in damages to public property and resources deployed to tear down the materials.

“For the Klang area, it costs the council RM40,000 a month for its enforcement personnel,” said Klang Municipal Council president Datuk Mohammad Yacob. 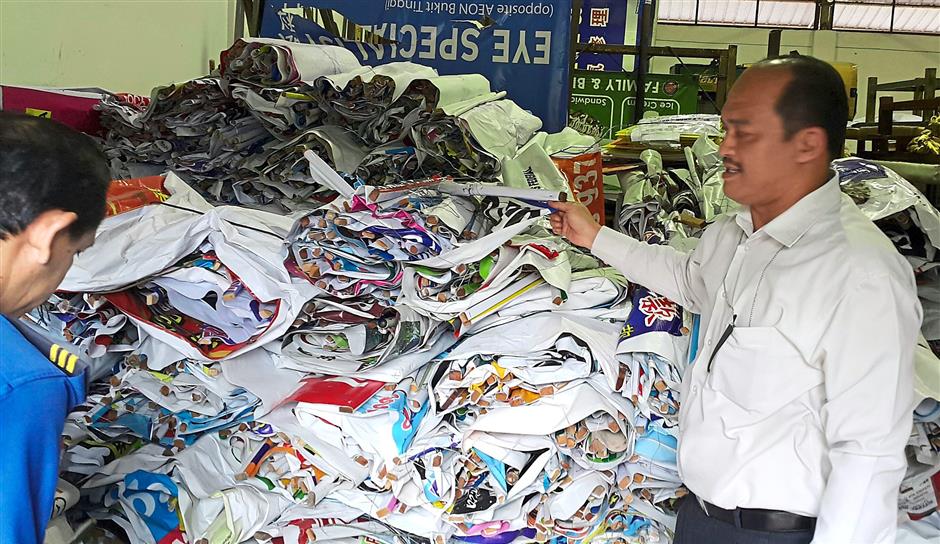 Klang Municipal Council enforcement chief Andry Arman showing the council’s store that is filled with illegal banners and posters that have been taken down.

He said the council had deployed 10 personnel to tear down the illegal posters, bunting and other types of illegal advertisements placed by loan sharks.

“Our men are working round the clock and we need to pay them overtime and this is additional cost including vehicles used for the exercise, storage and destruction of the materials,’’ he added.

Sepang Municipal Council enforcement chief Mohd Azran Musa said the council does its best to remove illegal advertisements every-time it was put up.

“It is a war between the council and the loan sharks. We want to see how far they can go on to print the costly materials on a daily basis. 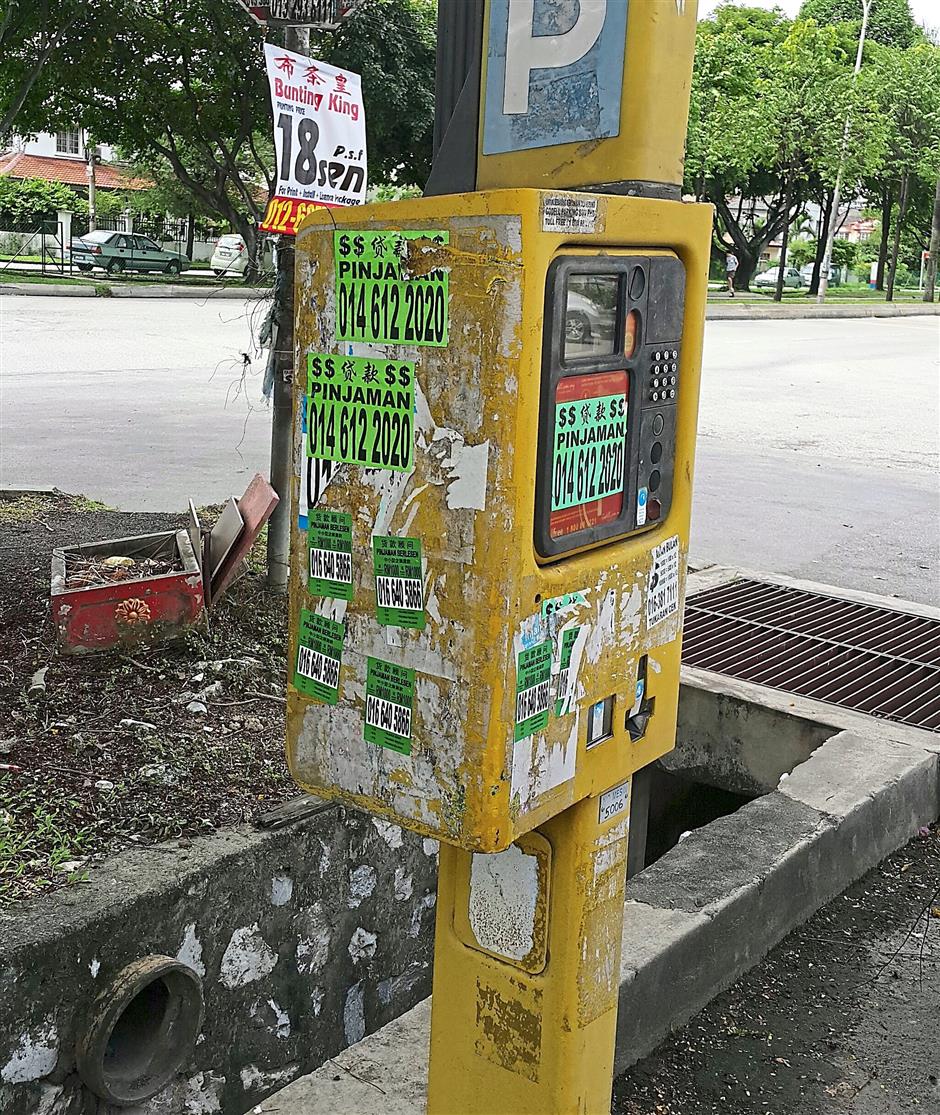 A parking meter is not spared. People cannot see the display because it is blocked by a sticker

“We have an eight-men team to tear down the materials and they have been doing a good job so far,’’ he said.

Last year 4,000 illegal advertisement materials were removed and this year another 1,400, he added.

Azran also said that 1,400 compounds of RM100 fine each were issued to those putting up the materials.

“So far it has reduced the number of illegal advertisements in our area,” he said.

Muhammad Azli said all the departments had been asked to channel the phone numbers found on the illegal advertisements to the Malaysian Communications and Multimedia Commission (MCMC).

“We do this with the hope that the MCMC will terminate the mobile numbers that appear on the illegal advertisements,’’ he added

“Enforcement officers go out twice daily to remove them,” he said. “It will also incur additional cost to us as MBPJ will have to pay more to the contractors for the added responsibility,’’ he said

“The Ah Longs are playing tricks. We found out that those from Klang are the ones who are putting up the advertisements in Kuala Langat while the loan sharks from here are advertising their business in Klang.

“They are probably doing this in order to avoid being detected by the authorities,” he said, adding that the council needed the full backing of the police to resolve the issue.

It was also reported that the Kajang Municipal Council had discontinued the use of anti-stick paint in its municipality after spending RM36,000 since its pilot project in 2011.

The paint was used to deter illegal advertisement stickers.

“It is too expensive for the council to use the paint,” said a council spokesman.