Chanting to save heritage Cause for concern: Heritage enthusiasts fear that the heritage building in Anson Road, George Town, may make way for a high-rise condominium.

A NON-GOVERNMENTAL organisation has expressed concern about the possible demolition of a heritage building in Anson Road to make way for a high-rise condominium tower.

The local council’s One-Stop Centre (OSC) portal states that the developer has submitted the application for the construction of a proposed 43-storey condominium block.

It comprises a lobby on the first and second floor, car park space from the first to 11th floor, recreational facilities from the 11th, and 40th to 43rd floor, and 75 condominium units from the sixth to 39th floor.

The application, the portal states, also includes a proposal to demolish a part of the annex at the back of the building and to restore the existing two-storey heritage building on Lot 1146, 19 Anson Road.

Lee said the building’s heritage classification could not be determined as the George Town World Heritage Incorporated (GTWHI) inventory of heritage buildings had yet to be made available.

“Category One is for buildings of high architectural and historical values which are not to be demolished, altered and extended except for restoration.

“Under Category Two are buildings with architectural values which are allowed to be renovated for adaptive reuse,” he said.

Calls made to GTWHI general manager Lim Chooi Ping to ascertain which category the building on 19 Anson Road falls under were futile as of press time.

“Please help to stop and preserve it!!!” was posted on the Facebook page of Penang Heritage Trust (PHT) president Khoo Salma on Wednesday.

“This one is 19 Anson Road. MBPP, GTWHI, where is your inventory? Penang state, where is the state heritage enactment and policy?”

Under the same post, she also commented “If the Pykett illegal demolition is not appropriately penalised, the present or future owner of 19 Anson Road could just knock it down illegally and wait to get an approval for new high-rise in five years’ time”.

Lee had reportedly said in 2010 that the then Penang Municipal Council (MPPP) had issued a rebuild order to a developer who had demolished a colonial era double-storey bungalow in Pykett Avenue.

The bungalow was demolished before the council’s technical heritage review panel could arrange for an inspection of the heritage building.

When contacted, Salma said it appeared that the application by the developer was for planning permission for “40+ storeys and part demolition”.

State exco member Chow Kon Yeow, when contacted, said the application for planning permission had been tabled on May 12 but not approved.

He said the decision had been put on hold as the application was subjected to compliance with technical requirements. 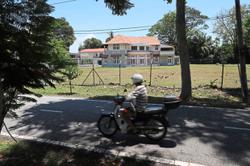