THE Milo Malaysia Breakfast Day 2015 in Precinct 3, Putrajaya attracted more than 20,000 participants to the breakfast event, taking home the message of starting the day with a healthy breakfast.

The annual event has received positive response since its inception, so much so that Milo decided to expand the event to two other cities.

Milo kick-started the first leg of its Malaysia Breakfast Day event in Ipoh on April 12, followed by Kuching on April 26 before the final leg in Putrajaya on Sunday.

The event started with the 7km and 3km runs. Participants enjoyed the chocolate malt drink, breakfast, games at the Milo Challenge Circuit and energetic stage performances. First meal of the day: Participants having their breakfast outside the Palace of Justice in Precinct 3, Putrajaya, during the Milo Malaysia Breakfast Day 2015.

One of the fun activities saw participants playing badminton on the Milo Cans Next Games badminton court, which featured a round court that spun and had its own net. It was the winning entry of the “Reimagine Badminton” contest.

It was Low Khiang Khai’s second time joining the Breakfast Day Run and he planned to participate again next year.

“This is a fun event for my friends and I. Starting the day with breakfast is very important,” he said.

Nestle Malaysia and Singapore region head Alois Hofbauer hoped to bring the event to more cities in the country. 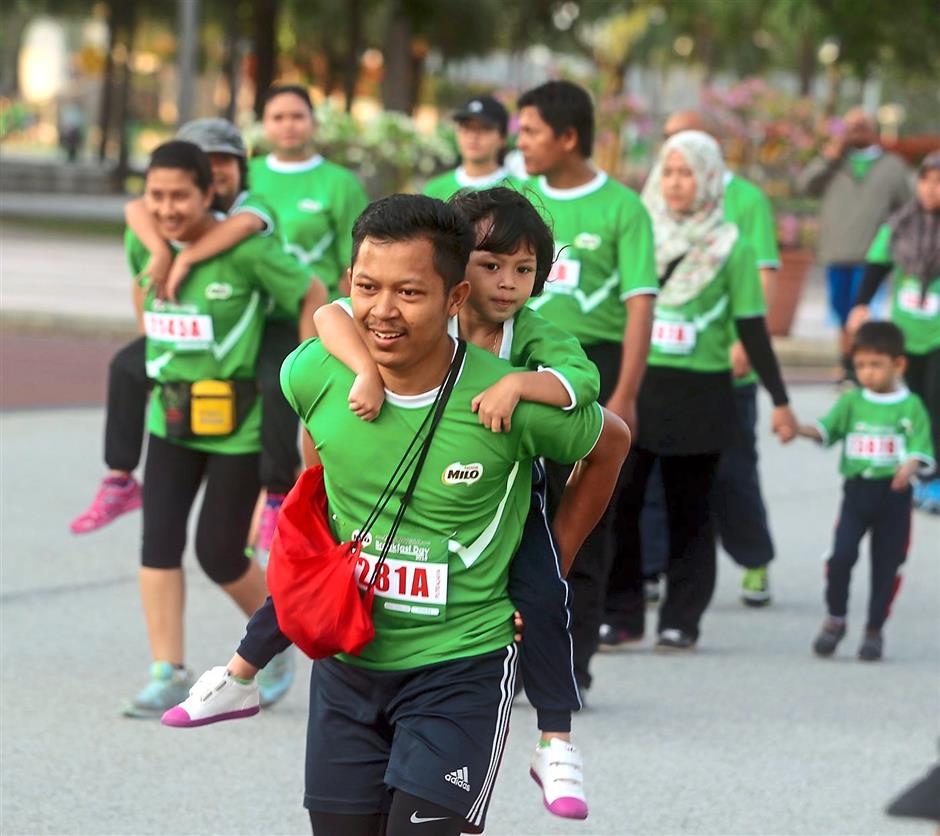 Daddy’s dearest: Parents carrying their children on their backs during the run.

“Children grow while sleeping and lose 80% of their energy reserves when they wake up, hence they must have nutritious breakfast to recharge for the day,” he said.

It was a fun family outing for many, more so as the event was held on Mothers Day.

Shaiful Khalid and his family made heads turn with their furry head gear.

His wife Anisah M. Zain said they bought furry animal hats during their recent visit to the National Zoo and chose to flaunt them at the event. Impressing the crowd: There’s more to riding bicycles as these guys show off nifty tricks on their bikes.

Shaiful and his wife ensured that their family started the day with breakfast.

“We can now make healthier choices as we got to know about the calorie count of common breakfast options here at the event,” he said.

Milo’s nutritionist was also present at the Wellness Zone to offer information about breakfast nutrition and the right ratio of nutrients needed in the morning to address daily requirements.