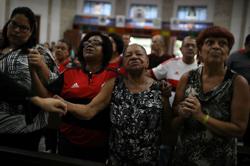 Here’s to the future: Ranking officials of the Malacca Club up on the podium toasting to its ‘good health’ and forward progress in the years ahead.

MALACCA: The Malacca Club believed to have been established in the latter part of 1880 and its original name etched only in 1890 as reflected in the pages of the publication “Twentieth Century Impressions of British Malaya” by Thomas John Newbold, commemorated its 125th founding anniversary.

The commemoration’s highlight spelt a gala dinner and dance affair at the Hatten Hotel where around 500 members and friends from affiliated clubs all over Malaysia and Singapore were in joyous attendance.

Newbold’s 1908-published book’s passage reads “The principal rendezvous of the European population in Malacca is the local club formed a few years ago, combining the functions of a sporting and social institution”.

According to the late Dr. R.Panicker who wrote extensively about the club’s history when compiling the centenary souvenir publication in 2000, then remarked, “It is believed that the original name of the Malacca Club was established in 1890. We are certain that E.E. Iremonger was the president till 1892 and was succeeded by D.F. A. Harvey the following year. Both these personalities are believed to be Resident Commissioners”.

In fact in his editorial for the centenary publication, Dr. Panicker a member from 1985 till his passing in 2011 noted, “We have indeed been guilty of not maintaining our past records. At least half a century of the history of ‘Ye Old Malacca Club’ was regrettably allowed to slip by undocumented”. Grandeur of the past: The former Malacca Club located in Banda Hilir at the foot of St Paul’s Hill next to the famous 16th Century Porta Santiago ruins.

When talking about the game in the Straits Settlement, he notes, “Cricket formed a vital bond of social interaction among the widely scattered British community. Though records are not available, cricket can be traced back to 1852 when a picked local side which scored 11 and 1 run played at the Singapore Club which scored 14 and 12 runs.”

It is also thought that the “Gentlemen’s Tavern” referred to in Newbold’s book ‘British Settlement in the Straits Malacca’ (1839), is the original name of the Malacca Club which is believed to have acquired its present appellation only in the late 1890s.

According to Arnold Wright’s “20th Century Impressions of British Malaya”, the club has developed into the principal rendezvous of the European populace in Malacca combining the functions of a sporting and social institution.”

With its origin and history still shrouded with much speculation and uncertainties but decked with chequered and colourful reckonings, the Malacca Club of the day has indeed come a very long way to now celebrate a glorious and historic milestone.

Starting with some 42 gentlemen and four lady members in the infancy years, the original colonial club house and padang was sited along Jalan Kota (Fort Road) at the start of Jalan Parameswara (Banda Hilir Road), which now houses the Merdeka Independence Memorial.

Currently, the club occupies the first five floors from ground up of the iconic Wisma Raya, a prominent commercial block landmark along Jalan Syed Abdul Aziz in the heart of Melaka Raya while fronting a scenic and serene view of the Straits of Malacca.

The club currently boast of some 1,500 members both local, outstation and overseas under the stewardship of newly-elected president.Lee Soon Hock.

Also under its wing is the iconic “Rotunda” the idyllic members’ countryside seaside venue at Tanjong complete with a sports complex catering for badminton, squash, darts, billiards,cricket,hockey and football.

All said the club is fast growing to be a popular “elite and status conscious” club and the place to be for working and retired professionals, business, commercial and industry captains, sports people, expatriates and those top-notch work personnel from outstation working and residing in the historic state.