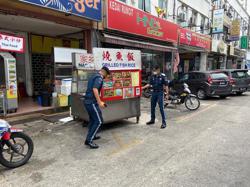 BINTULU: Today marks the official start of the Pan Borneo Highway construction, a project first talked about when Malaysia was formed in 1963.

Prime Minister Datuk Seri Najib Tun Razak will launch the upgrading of an existing road to Bakun Dam from Mile-32 of the Bintulu-Miri trunk road.

The highway building will continue in segments in the third quarter of this year, starting from Tanjung Datu, which is the western most tip of Sarawak. Let’s get going: Workers looking at a video preview of the Pan Borneo Highway launching ceremony. Najib and Adenan will launch the start on highway works today.

This 40km portion will bring road connectivity for the first time between Tanjung Datu and Sematan, which is represented by Adenan. It is scheduled for completion by end of 2018.

At the same time, the entire 740km stretch from Sematan to Miri city, in northern Sarawak, will begin construction in the third quarter of 2016, and is scheduled for completion in the first quarter of 2023.

Finally, the Tedungan to Merapok portion, which is the portion of Sarawak sandwiched between Brunei, will begin in early 2018. It is also scheduled for completion in early 2023.

The building of Pan Borneo Highway will mostly follow the route of the existing trunk road. It involves the widening of the present 3m wide single-carriage way into a dual-carriaway infrastructure.

Each of the new lanes will be at least 3.5m, while centre divider of 4m wide will also be built. New concrete bridges will replace metal ones.

Once completed, the new speed limit will be 100km/h across flat terrain (up from the current 70km/h), 80km/h on rolling terrain (from 60km/h) and 60km/h over mountainous terrain (from 50km/h). Upgrade soon: Presently, only about 14% of the Pan Borneo Highway is dual-carriageway, while the rest remains single lane country roads, and not in good condition.

Currently, the condition of the trunk road requires major maintenance, due to heavy usage across its single lane. Road travel is slow, estimated at 19 hours from Sematan to Miri.

Roughly 87% of the road between Sarawak and Sabah is nothing more than twisty single-lane country roads.

According to a government study of the North South Expressway in Peninsular Malaysia, highway construction induces a multiplier effect of four times to the economy.

The lack of a proper highway in east Malaysia has been a key opposition campaign matter in recent elections. The proposed highway is one of the most keenly-awaited developments.

Previously the highway was slated for completion in 2025 under the Highway Network Development Plan.

During the unveiling of Budget 2015, the Prime Minister announced it would be fast-tracked under a public-private-partnership implementation model. The cost was estimated at RM27bil.