Councils scramble to finalise preparations for the GST

THE Goods and Services Tax (GST) will be applicable on a number of services and facilities, including public toilets, provided by local councils come Wednesday.

It will affect rental of trade stalls, community hall and sports venues, parking fees, payment for building and road works plans and sale of road maps, among other things.

“We have prepared the coupon stamps for usage fee at public toilets.

“But as the amount is very minimal, DBKL will absorb the tax,” he said.

The good news is that assessment taxes, permits, licences, fines and compounds are not subjected to GST.

In Kuala Lumpur, DBKL has announced that rental of the People’s Housing Projects and Public Housing units will also be exempted.

With its implementation just around the corner, local authorities in the Klang Valley are currently scrambling to put together a list of services that will be charged GST.

The Shah Alam City Council (MBSA) stated that it had advertised the implementation via billboards in Section 3, as well as put up banners and bunting inside the various departments in Wisma MBSA.

“In addition, the announcements can also be viewed on our website www.mbsa.gov.my,” said MBSA corporate communications deputy director Shahrin Ahmad.

MBSA had also organised courses and seminars for staff across the board from senior officers to the rank and file to help them better understand the new tax system. Not exempted: GST will be applied to rental fees for halls such as the Lembah Jaya Multipurpose Hall in Lembah  Permai, Ampang

Subang Jaya Municipal Council (MPSJ) is one of many currently in its final stages of preparation.

According to MPSJ corporate communications deputy director Muhammad Azli Miswan, the council registered with the Customs Department last year, and is still putting in place the appropriate accounting systems as required.

“MPSJ will also be preparing a separate budget to make payments on items subject to GST.

“All Standard Rate items that are eligible for claims from the Customs Department are still being confirmed and will be managed by MPSJ’s Treasury Department.

“However GST will slightly affect the council’s earnings because not all items can be reclaimed from the Customs Department,” he said.

MPSJ president Datuk Nor Hisham Ahmad Dahlan said MPSJ would be conducting a townhall meeting early April to inform the public about GST. 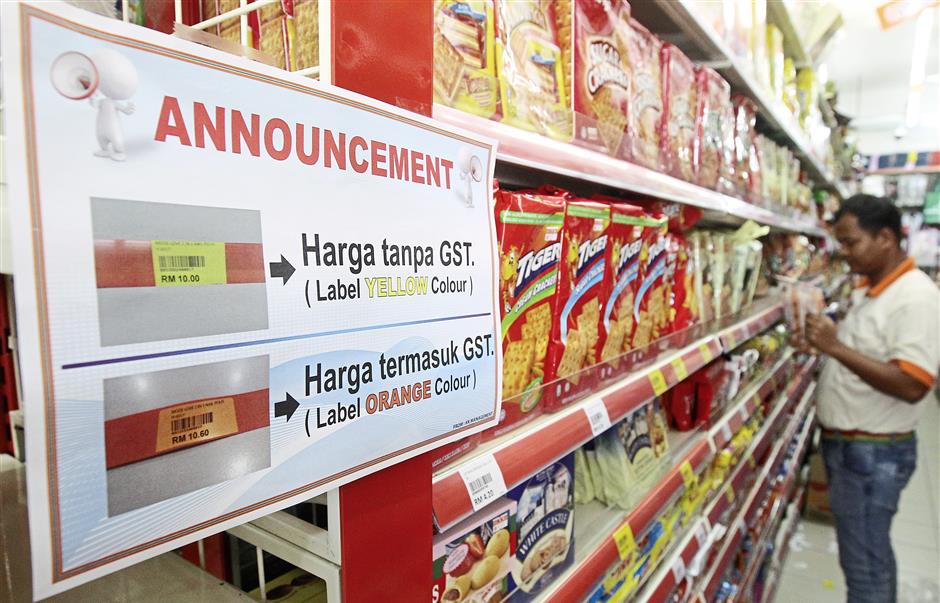 Getting ready: A worker punching price tags on the goods at a store in  Petaling Jaya

“I intend to speak Residents Committees, Residents Associations and Rukun Tetangga tomorrow to start distributing notifications to the community to provide a better understanding of issues relating to the tax,” said Nor Hisham.

Ahmad Phesal said a comprehensive list was being collated and would be displayed on DBKL’s website for the public to refer to.

“We understand that many people are still unsure about the implementation of GST and will have many questions.

“We have trained our counter staff in preparation but we cannot predict the type of questions that the public may have, so some questions may not get an answer on the spot,” he said.

Local Government, New Village Development and Legalising of Factories Committee chairman Ean Yong Hian Wah said GST would be imposed on indirect services while taxes would not be affected.

He added that the full list of services taxable would be released soon to the public.

“Currently, rental for community halls is between RM500 and RM1,000 a day.

“A 6% increase can be a significant sum.

“As these halls are usually rented for weddings and other events, people may opt to put up canopies outside their houses instead,” he said.

On the other hand, trader Abdul Alim Kader Mydin, 58, said the increase to his stall rental was minimal.

“Ampang Jaya Municipal Council charges RM360 per month for a spot at the Kompleks Muhibbah in Taman Nirwana. Educating shoppers: Many retailers have been putting up signs to inform their customers of how GST would affect them.

“With GST, it will cost an additional RM21.60, which is still affordable,” he said, adding that he had been trading there for the past 13 years.

USJ 4 resident Yvonne Kua said that so far, she was not aware of any notification from MPSJ about council services that would be subjected to GST.

“Most of what I have learnt about GST is from my workplace.

“But even as the price of goods steadily increase, salary remains relatively stagnant so on my part there will be certain cutbacks,” she said.

Businessman Nor Azman Abdul Rahman, who has customers in Subang Jaya and Shah Alam, said gearing up for GST included preparing a GST price list.

“We work from our own premises so we do not have to deal with rental issues.

“The main difference will be taxes imposed on importation of certain goods that may be an issue, although some goods such as milk is not subject to the tax,” he said.

USJ Heights Residents Association assistant treasurer May Ku believes companies will be able to save more. Out at the shops: Many  are going on last-minute grocery shopping trips  before the tax takes affect  on April 1.

“But it is going to affect the man on the street in almost every area, from food to daily purchases and we have no choice but to pay for it.

“I will probably shop less and buy only necessities or look out for sales to trim expenses,” she said.

SS18 resident Krishnan S. said she would be more wary about spending and would avoid impulse buys.

“I plan to do wholesale purchases that can be shared among friends or go to morning markets for cheaper produce bought direct from the farmers themselves,” she said.

Petaling Jaya residents, meanwhile, are relieved that their city council (MBPJ) has decided to absorb the GST for the first three months starting April.

SS2 Night Market Traders Association chairman Lee Yong Kang said the reprieve would give him and fellow traders more time to understand the situation and discuss how to handle the tax.

“We are having a headache dealing with this issue as we are still unclear over the whole thing,” said.

He added that the traders would be having a meeting today with MBPJ officers and councillors to get a firmer grasp on GST.

“I know we have no choice when it comes to the GST charge, but we want a clearer picture from MBPJ,” he said.

Currently traders are paying RM208 per lot, inclusive of the licence.

When asked if prices of goods the market would increase if MBPJ decides to tax them on rental, Lee admitted that they would definitely increase a little.

It has been reported that MBPJ will take the three months to study if it can absorb all GST costs.

The council will also decide on which fees will incorporate the GST and which extra costs it will continue to absorb.