In a friendly game: David (centre) flashing her famous broad smile as she poses with Kvyat (left) and Ricciardo.

In terms of competitive spirit there are few athletes with quite as big a will to win as Formula One drivers. So when on the eve of this weekend’s Malaysian Grand Prix, we set Daniel Ricciardo and Daniil Kvyat the challenge of taking on one of the world’s finest squash players in a battle to see which Infiniti Red Bull Racing driver could make the biggest racket on court (racquet, geddit), there was no stopping them.

After making the journey from the Sepang Circuit to nearby Marina Putrajaya, Ricciardo and Kvyat were introduced to their opponent, Malaysia’s Datuk Nicol David, the world’s number one women’s squash player.

David, who won a gold medal at the Commonwealth Games in Glasgow last year, is currently in training for the British Open in Hull, which starts on May 11. She is firmly at the top of her game.

The two men were thus challenged to see which of them could survive on court the longest before David reached a score of 11 points.

After a warm-up led by David, Kvyat was first on court.

The young Russian reckoned he had a slim advantage over his Infiniti Red Bull teammate, having been an occasional player during his junior racing years. 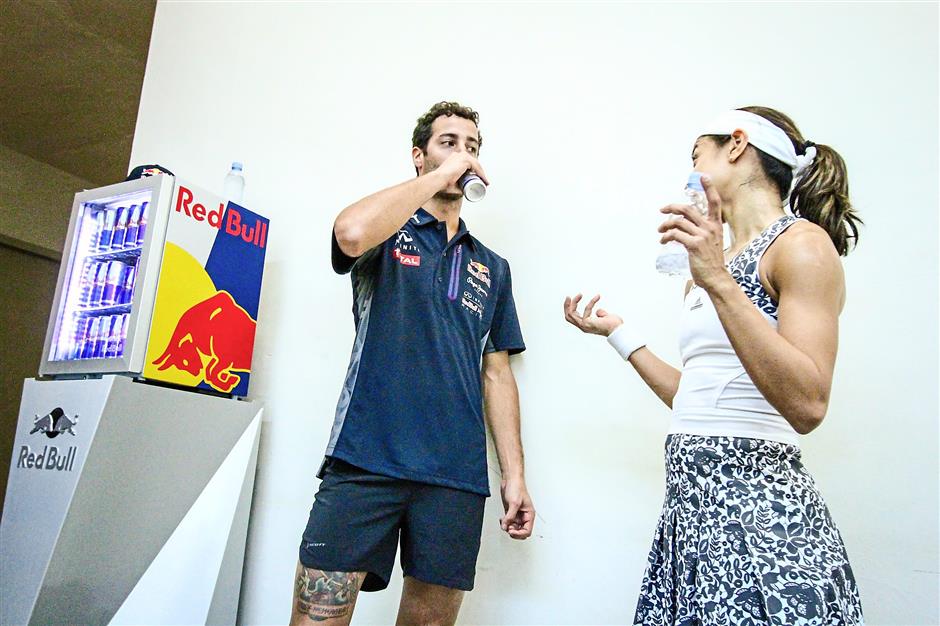 Thirst quencher: Ricciardo taking a Red Bull break with David after being declared the victor in the battle.

The Russian Rocket gave it his all, bringing his A-game to the contest.

He was momentarily hampered by having to use a racquet unbalanced by the attachment of a Go-Pro camera but he was soon back in the swing and put in a stellar, sweat-drenched performance.

It wasn’t long before David reached the 11-point mark.

Ricciardo, who had been busy courtside picking up tips on David’s game, was next to be thrown into battle.

David is famed across Malaysia for her constant broad smile, so pitting her against the ever-smiling Australian resulted in gales of laughter from both as Ricciardo — who later confessed to also being an occasional player some years ago — pushed himself to the limit to try to stay in the game.

Once again though, David raced to the 11-point mark and it was time to call a winner. After careful deliberation, it was Ricciardo who emerged victorious.

“It was pretty cool playing with Nicol,” said the victorious Ricciardo.

“I’ve played squash a few times and I do like racquet sports but it’s been more tennis and table tennis.

“I think the last time I played squash was in the UK four or five years ago. Although it’s easy enough to get back into the game, the sport is really demanding. It’s very intense. I only played for about five minutes but it felt like I’d been playing for an hour.

“Nicol made us work for it and I did feel that she was going easy on us,” said the Aussie star who confessed he was pleased with his on-court performance.

“I felt I did OK, not on the scoreboard but I think it was alright! Dany and I played here and it was down to whoever lasted the longest. I narrowly beat Dany and I won’t lie, I’m pretty happy about that!”

“It was nice to build up a bit of a sweat and do something different. We’ll be out on the track for the next three days, so it’s really nice to break it up with some other activities and to meet other top athletes,” Ricciardo added.