THE Formula One weekend got off to an exclusive start with the Petronas Malaysia Grand Prix Gala 2015.

The glittering guest list for the gala at the Kuala Lumpur Convention Centre on Thursday was headed by Sultan of Pahang Sultan Ahmad Shah and his consort Sultanah Kalsom Abdullah.

A total of RM230,000 was raised through the charity auction, with all proceeds going to Bidara Kedah, a charitable organisation which provides aid and assistance in various forms primarily but not exclusively to Kedahans in need. Fabulous fashion was provided through the Vintage Haute Couture showcase curated by Cameron Silver, who was listed as one of Time magazine’s “25 Most Influential People in Fashion”, and helped pen a book titled Decades: A Century of Fashion.

“The gala is held to complement the F1 weekend.

“We try to incorporate something new each year by having different performers to entertain guests in unique settings,” said Mokhzani in his speech. 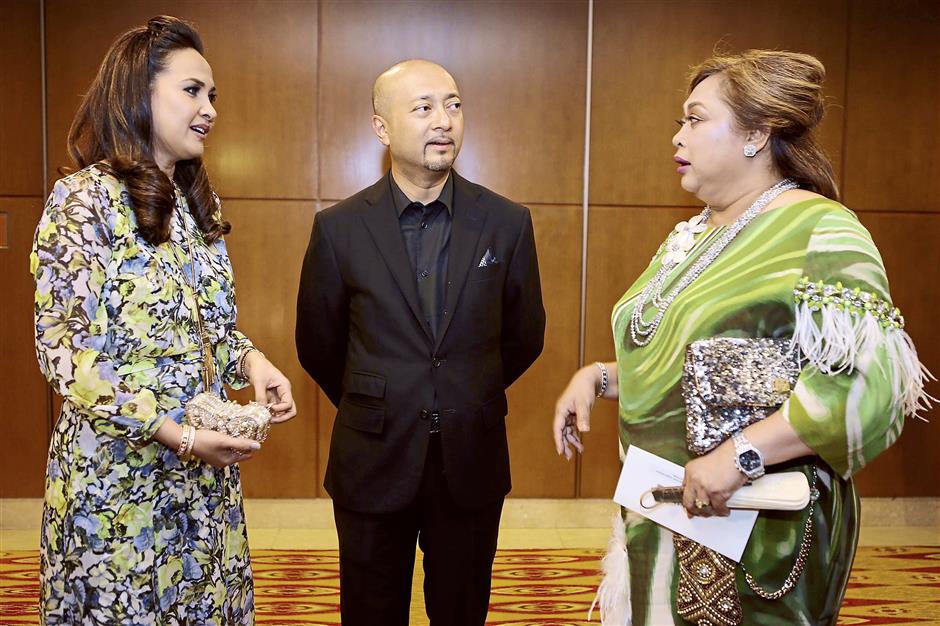 Action stalls supplied a spread of sumptuous delicacies to guests including oven-roasted rendang beef loin accompanied with steamed glutinous rice served at the Malaysian action stall and an assortment of desserts like macaroons, chocolates and cream puffs.

The decorations provided a suitable backdrop to the racing weekend with beautiful flower arrangements placed on striped black and white tablecloths while title sponsors and sponsors sat in cabanas with one-of-a-kind light displays.

Adding glamour to the event was a jewellery showcase by Mouawad outside the ballroom along with two F1 cars as well as a black Mercedes-Benz CLS 400 on display.

After the dinner, guests headed to the Plenary Hall to catch The Jacksons, comprising brothers Tito, Jermaine, Marlon and Jackie. Young fan: The Jacksons — (from left) Marlon, Jackie, Tito and Jermaine, posing for a photograph with eight-year-old Rayveenraj Rajadurai.

The American group brought a wave of nostalgia with timeless hits like Can You Feel It, Blame It On The Boogie, ABC and I’ll Be There.

The 75-minute concert also saw a short tribute to their late brother, Michael, who died in 2009.

After the concert, guests adjourned to the ballroom for the after party, which saw a 14-piece orchestra from France, Dov Amiel, performing while guests enjoyed supper.