MALACCA: THE Malacca Immigration Department will heighten surveillance efforts to prevent the entry of illegals through its borders.

A department’s spokesman said the monitoring effort was ongoing at hotspots areas, where such landings had been reported earlier.

He said Malacca was previously a hotspot for landings for illegals from neighbouring countries before the Malaysian Maritime Enforcement Agency (MMEA) identified the Sepang coastline as a major area for illegal landing and human trafficking activities.

This is because the site is filled with mangroves and estates.

“However, we are still focused on these previous landing spots although MMEA has shifted its attention to Sepang,” he said.

The spokesman was commenting on the statement by Immigration director-general Datuk Mustafa Ibrahim that enforcement effort was being heightened at a number of “laluan tikus” (entryways) and other illegal maritime entry points.

Mustafa had attended a dinner organised by State Immigration Department at Botanical Garden in Ayer Keroh, last week had said heightening checks at porous border areas required the cooperation from various enforcement agencies who were tasked to thwart smuggling and human-trafficking activities. He said the Immigration’s enforcement division would work closely with the various agencies and the police to eradicate criminal activities along the country’s borders and shorelines.

“We should also acknowledge that there are a number of laluan tikus along the borders especially in Sungai Golok, Kelantan where the boundary perimeter is wide and it is difficult for us to monitor all of these grey areas,” he said.

Asked whether the department knew where these entryways were situated along the border and illegal landing spots, Mustafa replied the areas were scattered wide and afar with no specific locations made known to his department.

“We will not compromise on border security issues and will continue to work with other agencies to intensify patrols and enforcement efforts,” he said. 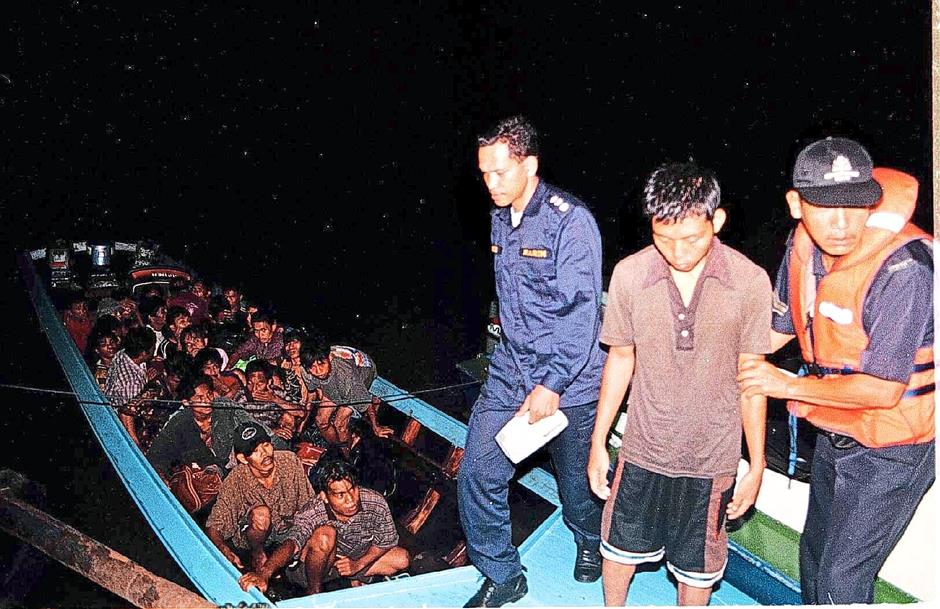 Marine policemen taking away a boat full of illegal immigrant who were caught off Pulau Besar for illegal entry into the country .

On another note, he said suspected individuals attempting to leave country to join Islamic State (IS) organisation could be barred at all exit points by the Immigration Department if recommendation on blacklisting them was made by the police.

Mustafa said his officers could scan particulars of identified Malaysians and even foreigners at exit points throughout the country and prevent them from leaving or entering the country provided that their personal details were provided by the police.

“On our part, we can blacklist those who suspected to leave the country to join militant movements in Syria and foreigners entering to spread their ideologies but we need security alert from the police,” he said.

Mustafa said the Immigration officers manning the entry and exit points at airports, harbours and borders could carefully check on suspicious individuals based on the list submitted.

He said with the security alert, the Checkpoints Authority (ICA) would be notified in advance to facilitate clearance at exit and entry points to prevent such individuals from exiting or entering the country.

“We will also monitor the exit points and suspicious individuals will be stopped and questioned,” he said.