Light shines on Heart of Borneo 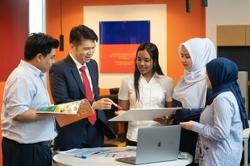 Picturesque: This view of a small, remote village in Bakalalan is one of many beautiful sights that await visitors to the Heart of Borneo.

MIRI: The Heart of Borneo, a vast expanse of prehistoric jungle shared by Sarawak and Kalimantan in the middle of Borneo island being preserved as a national park, will be in the spotlight of international universities soon.

Some 15 international universities from 15 different countries in five continents will be focussing their sight on this Heart of Borneo in a virtual reality promotional show to promote this landmark to the global audience.

These universities, including Curtin Sarawak, will be forming strategic alliances to come up with the best promotional package to market the Heart of Borneo to international clients.

These universities will be taking part in a competition called the “Global Communication Project” from June 4 to 6 this year.

Miri has been chosen as the venue to host this global competition, which is in its 13th year.

This is the first time that Malaysia is hosting the world event which has been hosted by among others, the United States, Britain, Germany, Italy, Protugal and South Africa.

Curtin Sarawak, which will represent Malaysia in the competition, is one of the 15 universities partaking in this 13th edition.

Event organiser Dr Kamala Vainy Pillai said that the competition was a multinational and multicultural event. “This event will see public relation and communication students and lecturers from the 15 universities collaborating with each other in virtual international teams, each taking on the role of international PR agencies in order to reach out to global audiences to market the Heart of Borneo.

“They will colaborate with each other to develop the best global PR strategies to promote the Heart of Borneo,” she said.

Kamala, who is also Curtin Sarawak lecturer in department of marketing and management, said the participants would work on their marketing strategies over the next two months via online links, and in June, they would gather in Miri to prepare for the final judgment on who had the best marketing plan to sell the Heart of Borneo to the rest of the world. The 260m-long canopy walkway near the Borneo Rainforest Lodge in the Danum Valley Conservation Area is a hit among visitors. Studies show that rainforest canopy supports a significant proportion of total biodiversity and it is sensitive to disturbance by logging and severe drought.

The governments of Malaysia, Indonesia and Brunei are partners in conserving and protecting the Heart of Borneo where rare animals and plants are found in their natural state, untouched by man.

Global Communications Institute president Volker Stoltz said such intercultural and international collaborations and pooling of expertise were useful in enhancing international relationship between people from different countries and continents.

“This is a unique event supported by the governments and NGOs. This competition enables the participants to come together and overcome cultural and language barriers and to work as one unit to solve global PR issues and implement global marketing strategies together,” he said.

Curtin Sarawak, the largest foreign university campus in Borneo, has been hosting numerous international events annually since it was set up in 2005.

It has about 4,000 students and staffs from some 35 countries.