Vibrant: Lee (left) outlining the upcoming projects to further add value to the township. Looking on is Leong.

THE value of property is more than its price tag.

For a residential unit, value is also placed on the conducive living environment for all generations in the family.

“We are waiting for the greenery to mature for the opening,” he said, visibly proud of the 26-acre park.

This park, he added, would be an extension of the 32-acre Eco Park 1.

Both parks are about 500m apart and connected by a walking/jogging path. 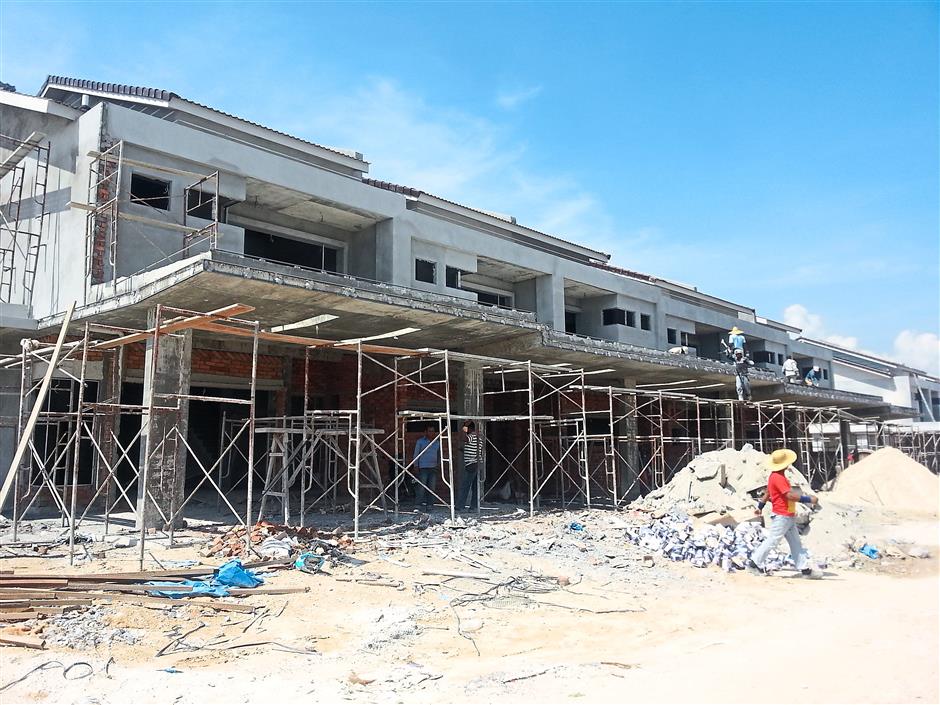 Close to completion: These 22ft by 75ft link houses under phase 7.3(3) in Bandar Seri Botani off Jalan Sultan Nazrin Shah, Ipoh, is priced from RM380,000 per unit.

Lee said “nature in the midst of living” has been Taiko Properties’ concept for Bandar Seri Botani since it started building its ambitious 1,200-acre township in 2004.

Besides promoting a healthy lifestyle, Lee said the parks were places for the residents to interact with each other and promote neighbourliness.

According to Taiko Properties general manager Leong Lee See, some 20% of the total land area would be open spaces when the entire area is developed.

The landscaping in both parks had also been given priority to retain the natural terrain as well as the flora and fauna as far as possible, she added. Walking space: The spacious hall on the second storey of the link house.

Apart from that, Lee said a sports complex in Bandar Seri Botani is in the pipeline.

It would be built on a nine-acre plot of land which formerly had a rubber glove factory, he said.

“The facilities include badminton courts and a swimming pool for a start,” Lee said, adding that sportsmen like badminton champions would be roped in to come up with top-notch facilities and training.

Another upcoming project is a commercial hub in the centre of the township.

Lee said the nine-acre hub would add vibrancy to the township, apart from the added convenience for the residents.

The facilities, he said, would include banking and finance, food and beverage, retail and education.

The project is set for completion by end of next year. It is basically a neighbourhood hub and very accessible, he said, adding that it would also be within walking distance for some of the residents.

Another outstanding feature of Bandar Seri Botani is its good connectivity. It is about 5km from the Simpang Pulai Toll Plaza.

The township is currently accessible via Jalan Sultan Nazrin Shah and the Lahat-Simpang Pulai road.

Lee said a new road would be ready soon, cutting through Pinji Mewah and Bandar Seri Botani, making it less than a 10-minute drive to Aeon Station 18 in Pengkalan, Ipoh.

Meanwhile, the rapid expansion of SJKC Padang Gajah in Bandar Seri Botani was also in tandem with that of the township.

The school was relocated to Bandar Seri Botani from Trong in Taiping, Perak in 2009. Modern and nice: Good quality finishing and accessories are among the selling points for Bandar Seri Botani houses.

The school’s headmistress, Lim Feei Feei, said some 95% of the pupils were from Bandar Seri Botani and surrounding residential areas.

She said plans were afoot for the school to have a new three-storey block with a capacity of between 15 and 20 classrooms.

Chan Yoke Keat who is the pioneer batch of teachers in SJKC Padang Gajah said some parents from Simpang Pulai were also keen to send their children to the school.

On the future plans for Bandar Seri Botani, Lee said its growing population there and the surrounding areas would see the demand for more commercial facilities.

While the focus from the start was landed residential units — single-storey and double-storey terrace, double-storey cluster, semi-detached and bungalows as well as double-storey shoplots and offices, Lee said there were also plans to include a high-rise condominium.

To date, some 750 acres comprising 5,000 residential and commercial units were completed.