Odd-job worker Chang Kok Ying, 70, feeding his wife Wong Fong Yeng, 63, her medication at their home at the Bukit Merah New Village in Lahat on March 9.

THERE is a Chinese expression which goes “eating rice with only soy sauce”.

The saying describes how poor a person is and it reflects 70-year-old odd-job worker Chang Kok Ying’s situation.

On days when there is no money left, he and his sickly wife Wong Fong Yeng and teenage grandson get by with eating plain rice with soy sauce.

Working odd jobs for a contractor, Chang not only struggles to put food on the table but also finds it difficult to look after his sickly wife, aged 63.

“My wife had a stroke twice before this. She suffers from hypertension, Alzheimer’s disease, diabetes and depression.

“She needs to see different doctors at the Raja Permaisuri Bainun Hospital each month. Next month alone, she has four appointments.

“While most of her medication is provided by the hospital, there are some which we need to purchase on our own.

“Last year, I bought an old car for RM600 as the taxi fare to and from the hospital became too much to bear,” he told reporters at his dilapidated home at Bukit Merah New Village in Lahat, Perak.

Chang, who was an excavator operator before he had a workplace accident, has trouble walking as well.

“I force myself to work and to drive my wife to the hospital even though it hurts to move my legs,” he said. 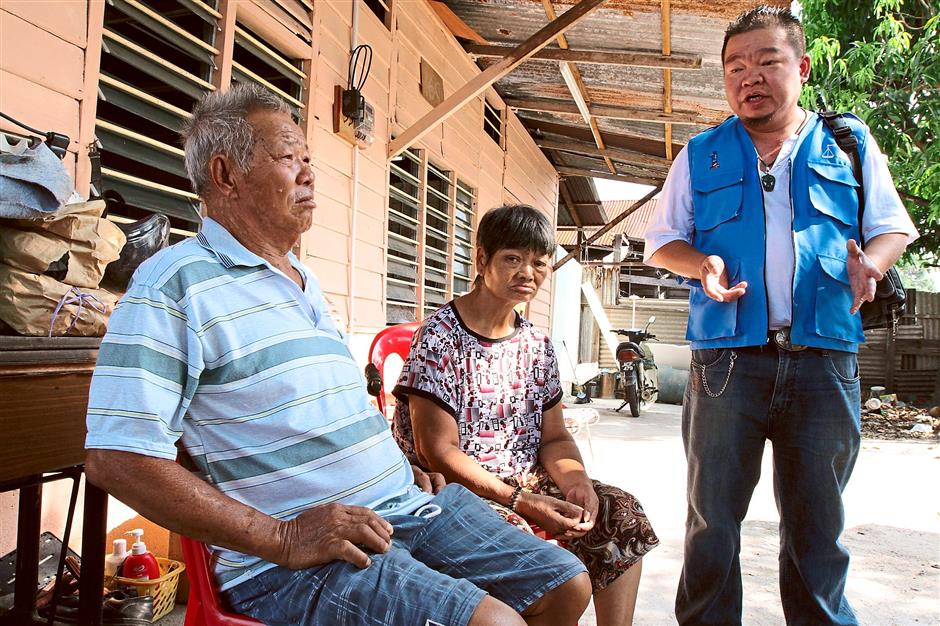 Seeking help: Lee (right) speaking to Chang at the odd-job worker’s home. Lee said the couple’s situation was pitiful and urged the public to help in any way they can.

When asked about his four children, Chang said he had lost contact with all but one daughter living in Kampar who visited occasionally.

“I have no choice but to seek help from the public.

“My grandson has to cycle several kilometres to and from school in Lahat Baru each day because I have no money to send him by bus.

“I pray that he doesn’t drop out of school and hope he at least completes his secondary education so that he can have a better life,” said Chang, who has been taken taking care of his grandson since birth as his mother is nowhere to be found.

“There is an urgent need to fix the roof of their house as it leaks whenever it rains. The elderly couple might just slip and fall.

“We have also helped Chang set up a bank account for donations,” said Lee.