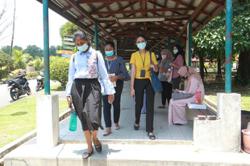 We did it: Six out of eight of the STPM top scorers from SMK St Michael Ipoh (from left) Khong Wei Hung, Christina, Carrie, Lim Suat Yee, Joo Hin and R. Charroogesinee proudly showing their certificates.

BEST friends Christina Wong See-Kei and Chang Carrie do not only have names that start with the same initial, but they are classmates who took the same subjects for the 2014 Sijil Tinggi Persekolahan Malaysia (STPM).

And on Monday, it was announced that both the SMK St Michael Ipoh students scored the same results as well - a perfect 4.0 cumulative grade point average (CGPA).

They had taken History, General Studies, Business and Economics together.

Joined at the hip since their enrolment into Form Six, Carrie and Christina, both 20, said they owed their excellent performance in the exams to each other.

“Both of us were extremely busy as we had co-curricular duties to attend to almost everyday.

“But whenever we had the time, we helped keep each other on the right track to ensure we did not succumb to distractions.

“It is also important to have good time management, so we could prioritise our list of things to do everyday.

“Without Christina, I do not think that I could have scored so well in STPM,” said Carrie, who was the president of the school’s St John Ambulance Association.

Christina, on the other hand, was one of the editors for the school’s yearbook.

“I find it unreal that I managed to score a CGPA of 4.0, because I was reluctant to enter Form Six at first after hearing stories from seniors that it is quite tough.

“Alas, my parents could not afford to send me to private institutions and since then, I strived to do my best in my studies,” she said.

Christina added that she loved burning the midnight oil, as there were fewer distractions at night.

“Carrie and I each made our own notes to study and we created many mind maps to understand things better.

“We even photocopied our mind maps for our friends when they asked for it and it felt great that I could help my classmates,” she said.

Both Christina and Carrie are aiming to enter the Universiti Malaya (UM) to further their studies in business and law respectively.

Another top scorer in the school, Ho Joo Hin, 20, also scored a CGPA of 4.0 for Biology, Chemistry, General Studies and Additional Mathematics.

While he noticed girls loved to make colourful notes for memorising, Joo Hin said it was not an effective studying method for him.

“Every student has a method that works for them and I find that I do not like studying on a fixed schedule.

“I was the school’s head prefect and president of many clubs and societies.

“Coupled with my tuition time, it is difficult to set a timetable for studying so I just made it a point to study whenever I was free,” he said, adding that he made sure not to allow personal problems to get in the way.

Coming from a humble background, Joo Hin, whose parents are a lorry driver and a homemaker, said he wished to study medicine and serve as a doctor in Malaysia one day.

“I know that many youths would choose to study overseas because they think the grass is always greener on the other side.

“But to me, Malaysia will always be home. My family is here.

“Even if I study elsewhere, I would want to come back to work here,” he said.

“A total of 98.01% of the 3,971 candidates who sat for last year’s exams scored a full passing rate, when it was a close 97.14% out of 5,276 candidates the year before,” he said at a press conference held at the state Education Department recently.

Zulkurnaini also revealed that four candidates in the state were recognised at the national level for their stellar achievement in STPM.

“In the meantime, SMK Raja Permaisuri Bainun Ipoh is the only school in the state that recorded a full 100% passing rate for four subjects.

“SMK Dato’ Haji Abdul Wahab in Sungai Siput obtained the highest improvement for school grade point average in the state, which is 2.98 compared to 1.62 the year before,” he said. 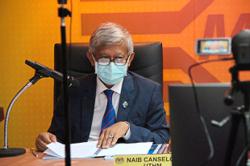