Lightweight: Esham says he would not endorse the new galvanised steel fittings that have been installed in front of the existing railings

New railings installed at the PPR Kota Damansara flats to replace the old and worn out ones are not up to mark, says an engineer.

Esham Salam, who was engaged to check on the safety of the new railings installed after a five-year-old boy fell to his death a few weeks back, said he would not endorse the new galvanised steel gratings that were anchored to the ledge.

“I do not think this has been well engineered. It looks and feels strong but in terms of design I think it is dangerous,” he added.

Esham said the horizontal bars encouraged toddlers to climb up and peek over the railings, posing immediate danger once again.

The material, he said, should be able to handle a certain amount of weight as well, while horizontal and vertical steel bars should follow the specifications in terms of height and width.

Esham, who was engaged by the non-governmental organisation Friends of Kota Damansara, added that the management body of the People’s Housing Project (PPR) Perumahan Dan Hartanah Selangor Sdn Bhd (PHSSB), a real estate company wholly owned by Selangor Housing and Property Board (LPHS), should look at the safety standards in place.

Five-year-old Muhammad Zul Hazriq Danish Alden fell through the missing railings from the sixth floor of the flats while Tinesh Raj, also 5, from Block D leaned over a rusty railing and fell to his death on June 21, 2013.

Esham said there were clear guidelines adopted by the Selangor state government in terms of by-laws and safety regulations.

“They should adhere to these rules because this affects human lives. We should not allow another incident to happen,” he said emphatising with PHSSB for inheriting a substandard building which it had a tough time maintaining. 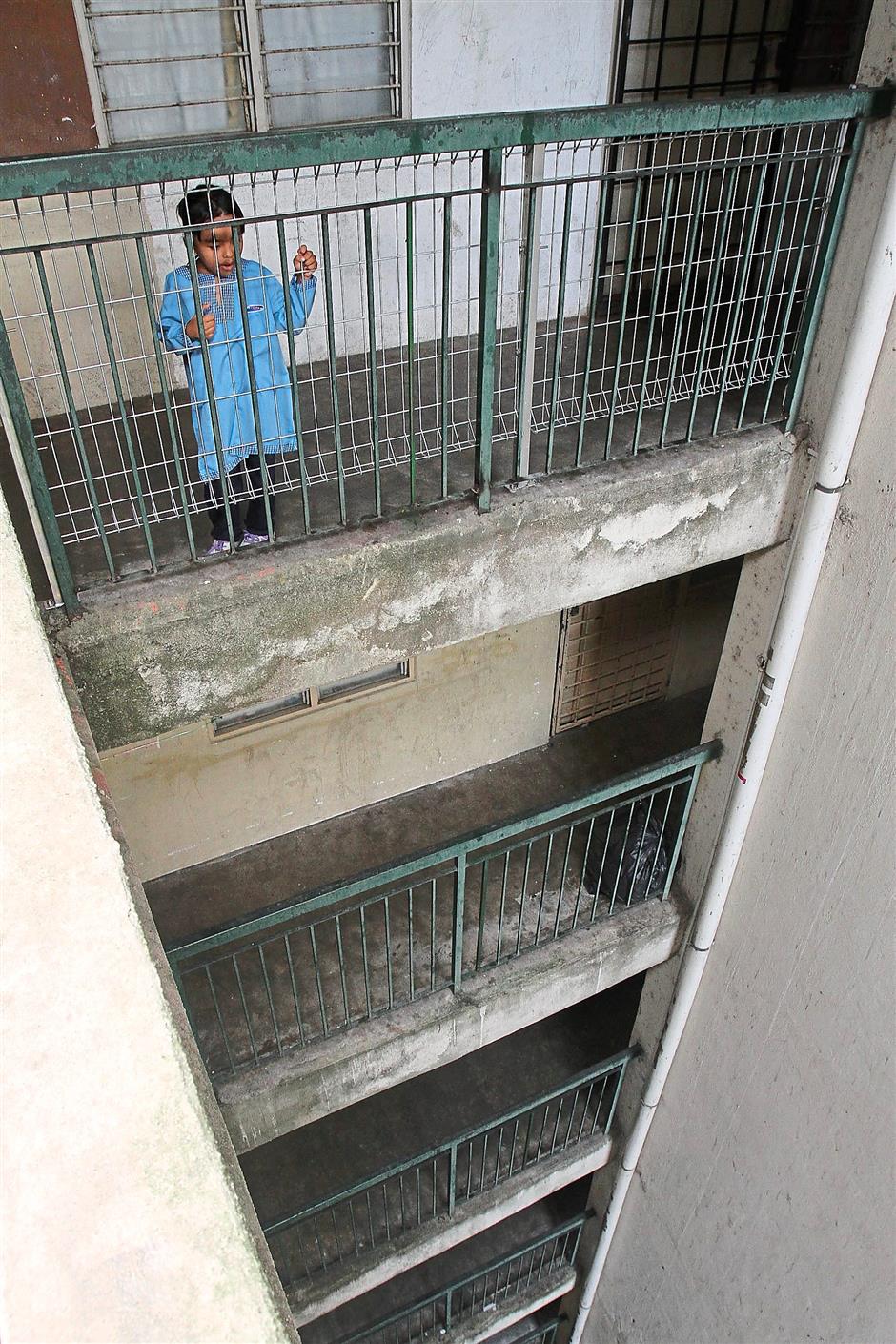 Unprotected: The new railings are just another way of forestalling the existing problem with the old railings.

The only way to address it he said was to go back to the original owner and get them to get it done immediately.

Friends of Kota Damansara chairman Jeffrey Phang said the steel bars were a temporary measure and was in the trial stage at the moment.

He hoped the management would discuss the matter with the residents to get their approval before going ahead with the plan.

Resident Anuar Sulaiman, 48, who had a six-year-old special needs child, was afraid the railing was not foolproof for young children.

“Since there are horizontal and vertical bars, children can climb over and we are not around to monitor them all the time. At least add another bar in between the existing vertical bars so there will be no room for the children to place their foot through to climb it,” he added.

Muhammad Zul Hazriq Danish’s mother NorSahura Sahara Muhammad, 35, said she discovered that PHSSB did not have its own engineers and suggested them to get expert advice on the matter.

In a statement to StarMetro, Fernandez had said that the PHSSB, being the landlord, owed a duty of care to all tenants, occupiers and invitees to the flats.

“This duty is to ensure as far as reasonably possible that the building is safe. They have, in my opinion, grossly failed in this duty.

“Reasons like no budget are no defence as they rented out the units,” he added.

“To-date the buildings are still death traps for children, no one has resigned or has been sacked.

“No amount of money will bring Muhammad Zulhazriq back to life,” he said, adding that he would write to Selangor Mentri Besar Azmin Ali to address the issue.