MIRI: The Miri Country Music Fest 2015 hosted by Miri City has been a runaway success, drawing full-house capacity, but tourists attending it wanted the Immigration and Customs Department at the Sarawak-Brunei border to open their clearance gate for 24 hours during the weekend to enable uninterrupted flow of people and vehicles.

At the moment, the Immigration and Customs lanes closed at 10pm daily, and this was not ideal for interstate travellers.

The music fest, staged on Saturday night, saw overwhelming response from local music fans and also from foreign tourists, including many who crossed over from Brunei.

British tourist Claudia Bent, who came to Miri from Brunei after touring Sabah, told Sarawak Metro that she heard about the Miri Country Music Fest while she was travelling through the oil-rich sultanate. 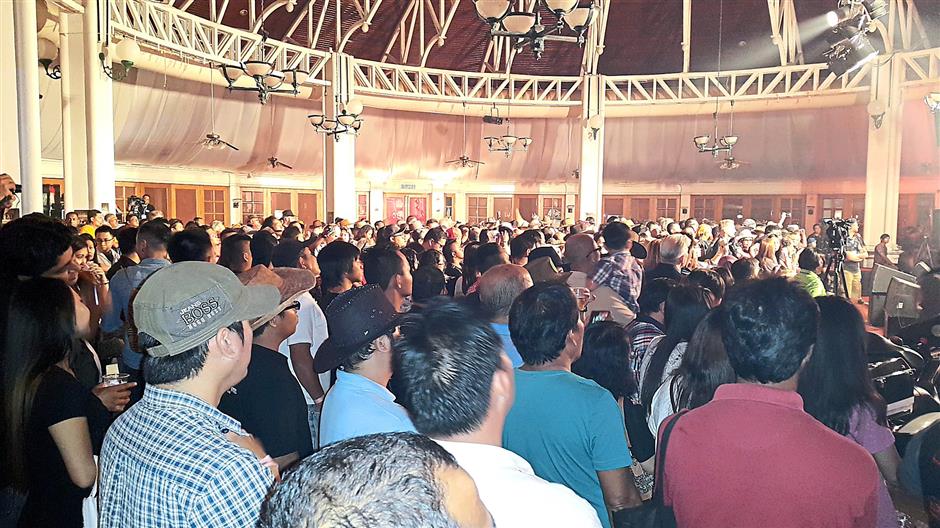 Full house: The awesome response to the music fest.

“I came to Miri today (Saturday) just for this fest, but I will have to rush back to Brunei so that I can get back to KK (Kota Kinabalu) in order to catch my flight to Kuala Lumpur and back to London.

“It will be good if the border checkpoint (at Sungai Tujuh at the Miri-Brunei boundary) could be opened for the whole day so that we (tourists) can come and go at our convenience,” she said when interviewed at the fest.

The event was organised by Planet Travels and Conventions, and supported by the Sarawak tourism promotion authorities.

Six country music bands from Asean countries, the United States and and also from Sarawak entertained the crowd of more than 2,000.

There were also dancing workshops, and promotion of local food and handicrafts that added colour and fun to the event.

It could be seen that among the crowd that turned up were many foreigners.

Sarawak Assistant Minister for Communications Datuk Lee Kim Shin, who also visited the event, said that he was happy to see the good response from locals and foreigners.

“The response had increased rapidly as compared with last year. I am confident this can become another major international music fest for Miri and Sarawak in the annual tourism calendar.

“There are requests from many visitors to have a two-day fest, not just one day.

“There is a need to increase the number of Immigration and Customs personnels at the border checkpoint to ensure speedy clearance and smooth flow of people and vehicles across the border.

“There are a total of 11 lanes on each side of the Sarawak and Brunei border, but travellers told me that at any one time, only three lanes were opened,” he said.

Lee, who is also State Assemblyman for Senadin, said he had urged with the Immigration and Customs top brass to look into the matter urgently because the border crossing at Miri now handled at least three million cross-border travellers every year.

The number is expected to continue surging, with Miri becoming the focal point of Bruneians and foreign expatriates there who come here in droves every week for shopping, food and entertainment.