Freshly made: Contestants from Miss Universe Malaysia 2015 enjoying their bottles of juices.

IT is a classic success story of a business that takes off from the kitchen table of young entrepreneurs.

La Juiceria Sdn Bhd - a company specialising in cold-pressed fruit and vegetable juice - is moving to a 929 sq m central kitchen at the Kepong Industrial Park in Kuala Lumpur next month.

“We started operating on the first floor of a shoplot in Sri Hartamas in March last year.

“Prior to that, we were juicing in our own kitchen for three months,” said Anabelle Co-Martinent, who is in her late 30s, and one of the three founding partners of La Juiceria.

The other two are Hong Theng Lok and Kong Len Win, who are in their early 30s and are childhood friends.

It went on a rapid expansion not long after, with four retail outlets in Kuala Lumpur so far - one in Sri Hartamas and two in Mid Valley Megamall by the end of last year, while its fourth outlet in Bangsar Shopping Centre (BSC) opened last Sunday.

Co-Martinent said they are now preparing to open their fifth outlet in another upmarket shopping mall in the capital city soon.

While La Juiceria had started out as an online delivery business, Co-Martinent said retail sales accounted for 80% of the total sales now.

She said the company has 40 staff members, including three nutritionists, to cope with its expansion.

Co-Martinent said one of the nutritionists would visit the outlets daily to train the staff manning the outlets to help serve customers better.

She said the customers could be classified into two broad categories - those who are conscious about their health and beauty, and those with health problems such as obesity, high cholesterol, hypertension, constipation and cancer.

On the company’s upcoming expansion plans, Hong said they were looking into supplying the juices to airlines and cafes. Towards a healthy lifestyle: (from right) Kong, Hong and Co-Martinent at the opening of La Juiceria’s latest outlet.

Apart from that, he said they were also coming up with more varieties of juices to provide a wider choice for their customers.

Describing the cold-pressed juices as a wellness product, Port Klang Authority chairman Tan Sri Kong Cho Ha said the demand for it would rise in tandem with the country’s development.

“The people will be more educated and health conscious as the country moves towards a developed status.

“Practising a healthy lifestyle for health and beauty reasons is the way forward, especially for the young,” Kong said at the opening ceremony of the outlet in BSC. 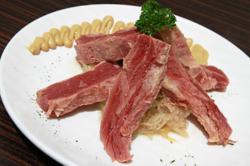 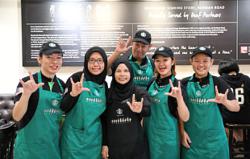 5 Malaysian companies that hire the deaf