KUCHING: The residents of Rumah Lugum longhouse in Nanga Taba, Ulu Kanowit, now have 24-hour electricity following the installation of the iM Sarawak micro-hydro system in a nearby river.

Headman Lugum Jenging said the daily lives of the residents had changed for the better thanks to iM Sarawak, a social development initiative led by the 1Malaysia Sarawak Advisory Council (1MSAC) to improve the quality of life of various communities throughout the state.

“We are grateful that we now can enjoy round-the-clock electricity. With this micro-hydro system, we can save a lot of money which was previously spent on diesel power generators,” he said.

1MSAC chairman Datuk Joseph Salang, who joined the residents to celebrate the installation, said it was done through a completely Sarawakian effort.

“The longhouse residents were involved in the construction of the system and the contractor who was commissioned to execute the installation was from Meluan,” he said.

He added that this was one of several micro-hydro systems installed by iM Sarawak for longhouse communities, with the same concept each time.

The system at Rumah Lugum was built to generate 8KW of power and is expected to last at least 15 years. It utilises “run-of-river” technology whereby flowing water is used to power the generator to produce electricity and is then diverted back into the river.

The installation of the system began in December 2013 as part of a plan to help provide electricity to longhouses. 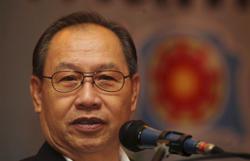