Delayed harvest: Eng says the stock ordered may not arrive as it depended on the farmers.

The Flower Place owner Kelly Eng, 52, said the price of roses, a traditional favourite, would usually go up in the months after the rainy season.

“It is common for roses to cost more following the year end because of the low supply caused by wet weather.

“Even now, we don’t necessarily get the stock that we order because some farmers are also harvesting later,” said Eng, who has been in the business for over 30 years.

While the cost of a single stalk of rose was between 70sen and 80sen on normal days, Eng said the price of roses would cost at least RM3 during Valentine’s Day.

“And because suppliers in Cameron Highlands can’t raise their prices too much, they make up for their earnings by increasing the price of filler flowers such as baby’s breath (gypsophila paniculata) and forget-me-nots (myosotis),” she said, adding that the price of lilies and daisies from the same area had also gone up slightly.

She added that as of now, she was still unsure how much more flowers from Cameron Highlands would cost as suppliers had not yet released their price lists.

According to Eng, the ongoing crackdown on illegal farmers in Cameron Highlands had minimal effect on the price of flowers for Valentine’s Day.

“Of course, it will have some bearing on prices but I think the crackdown would cause a greater impact on the price of chrysanthemums for Chinese New Year,” she said. 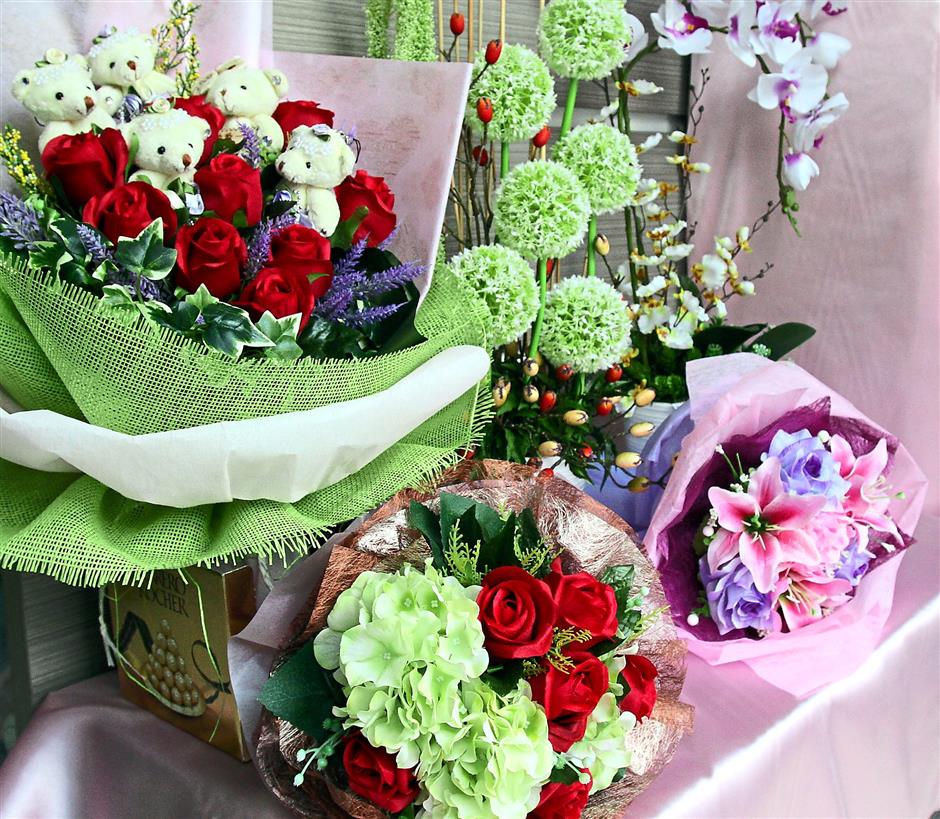 Eng noted that should there be a shortage of roses in Cameron Highlands, which was the only place in the country where roses were grown, then there was no choice but to import.

“Imported flowers will always cost more than locally grown ones because of transportation charges.

“What’s worse is that our ringgit has depreciated of late and so we have to pay more for other flowers such as hydrangeas and tulips, which are brought in from China,” she said.

Even so, Eng said Ipoh folk would not be deterred from buying flowers for their special someone on Valentine’s Day.

“If compared to buying jewellery, perfume or watches, a bouquet of flowers is still the most economical option and it never fails to make an impression. 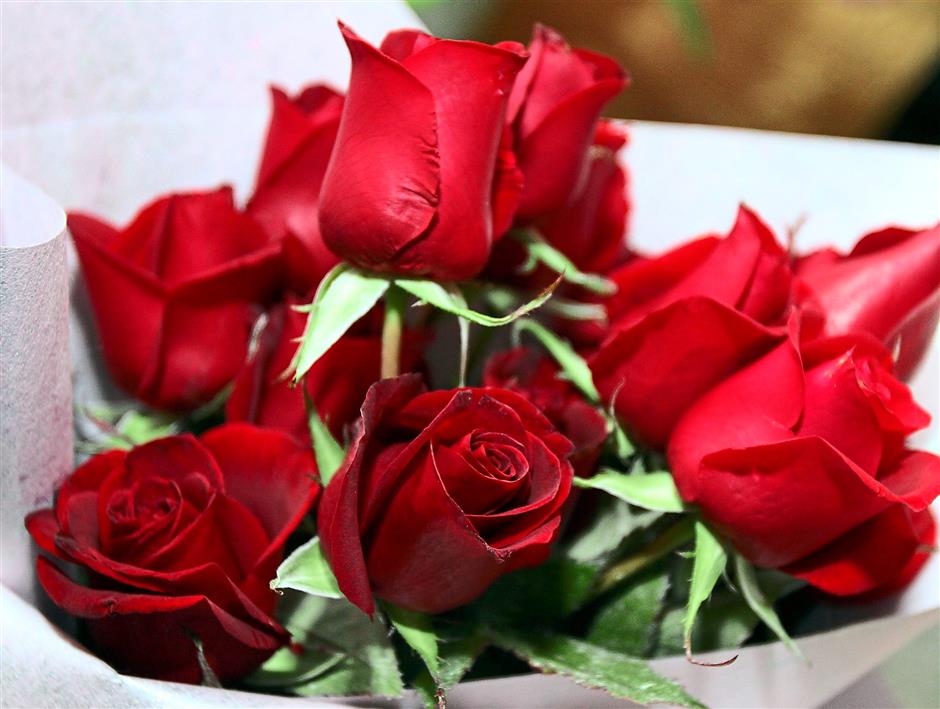 Love is in the air: Red roses remain the most popular for Valentine’s.

“In fact, orders for flowers have risen over the years.

“My workers and I have to work round the clock at least two days before Valentine’s Day to meet orders as compared to previously when we could get everything ready on the eve of the occasion,” she said, adding that customers who patronised her shop in Bandar Baru Medan Ipoh ranged from teenagers to those in their 50s.

Ivy Floral & Gifts owner Erin Chew also anticipates higher prices for roses because of a shortage of the flowers in Cameron Highlands.

“The crackdown on illegal immigrants, the incessant rain and constant landslip there have collectively led to shortage of roses.

“I am sure the price of roses will go up by at least 100% and could cost at least RM4 per stalk by Valentine’s Day,” said Chew, who uses double A grade roses for her floral arrangements. “As such, it would cost customers at least RM10 per rose with wrapping.

“Hence, I try to encourage customers to opt for chocolate or soft toy bouquets instead of roses.

“But even then, roses, especially red ones, remain the most popular choice among customers,” said Chew, whose shop is on Jalan Sultan Abdul Jalil.

The red rose symbolises love, passion, beauty, courage and respect while the number of roses also has significant meaning.

For example, three roses is a profession of “I love you”, 10 roses means, “You are perfect” while 99 roses says, “I will love you for as long as I live”.

Lyna Mong, co-owner of Lyna Florist, also located on Jalan Sultan Abdul Jalil, said there were a few customers who would opt for artificial flowers. 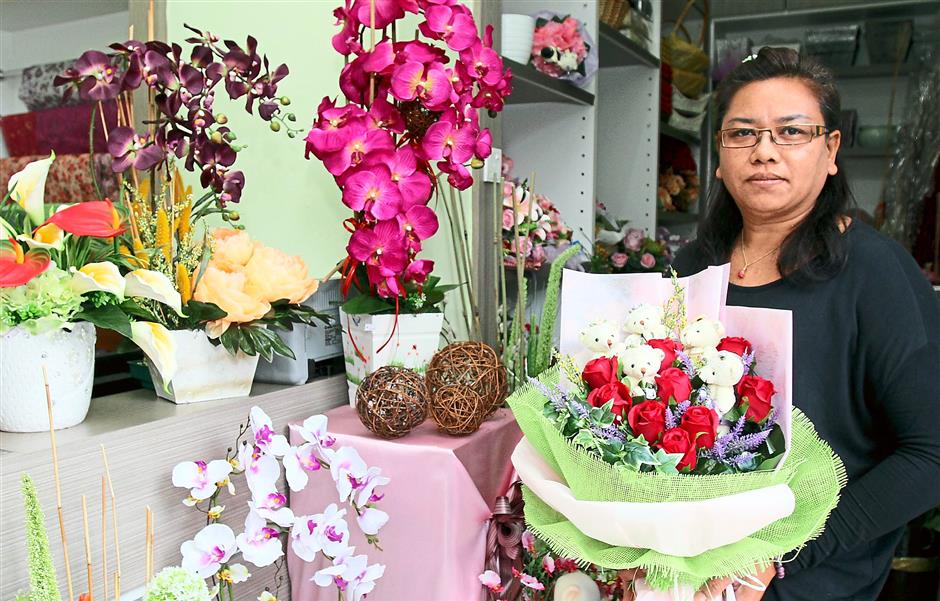 An option: Mong with a bouquet of artificial flowers prepared for Valentine’s Day.

“Some prefer artificial flowers as they are everlasting,” she said.

Mong, 44, said despite having to keep up with the high cost of fresh flowers this Valentine’s Day, she would try to keep her prices as low as possible for the benefit of her customers.

“Times are hard and people are strapped for cash, more so with Valentine’s Day being so near to Chinese New Year.

“I feel it is more important to create a good rapport with my customers than turning a huge profit for that short period,” she reasoned.