In discussion: Dr Ng (background, left) at a meeting with his committee members.

AFTER a two-year hiatus, non-governmental organisation (NGO) Ipoh City Watch (ICW) is being revived and aims to be the voice of the Ipoh people once again.

Its president Dr Richard Ng said with the new committee members, they would be the voice of Ipoh ratepayers in raising issues that affect the city.

“It is a tall order but our vision is to make Ipoh the most liveable city in Malaysia.

“We will help protect the rights of ratepayers to have a clean, safe and healthy environment,” he told MetroPerak.

“We will also stand up for the rights to be provided with all amenities as stipulated in the local by-laws under the Local Government Act,” he added. 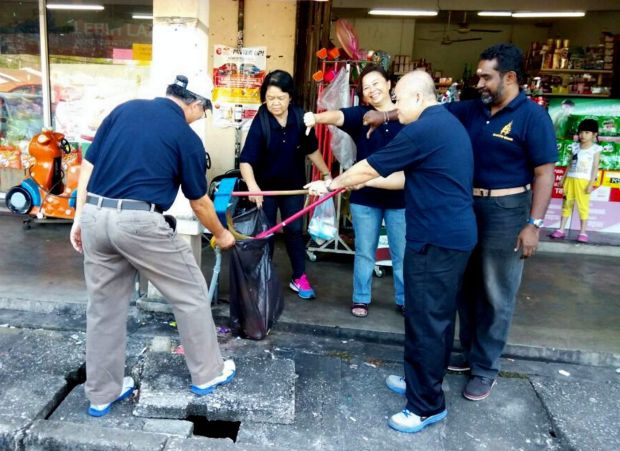 Dr Ng explained that the organisation had faced some internal issues a few years ago that led to its de-registration in 2013.

“The ICW, which was established in 2002, was de-registered after the last committee failed to submit its report and accounts to the Registrar of Societies for two years.

“Several members got together to hold an Emergency General Meeting and re-establish the organisation in April 2014.

“I was then elected as its president in November last year,” he said, adding that his term would be until 2016.

Dr Ng said the group would conduct three E’s - Engage, Explain, Educate - to talk to people, explain to them on what is right and wrong and to create awareness on doing their part to keep the city clean and safe.

“Our target is to conduct our walkabout at all 23 zones in the city.

“We also want to have our representatives from all these zones to highlight issues plaguing their respective areas,” he said, adding that its slogan was “Our City, Our Responsibility”.

“We can then bring these up to the relevant authorities for action to be taken,” he added.

Dr Ng also said they wished to work together with other NGOs, residents associations and security volunteer groups to make Ipoh a better place.

“Most importantly, we want to build bridges with the Ipoh City Council. It is, however, a challenge as we are often perceived as an Opposition group,” he said. Dr Ng said the biggest challenge for ICW would be to educate the people.

“They always think that the cleanliness and the safety of the city are the responsibility of the local and state governments.

“If everyone had played their roles, Ipoh would be so much cleaner,” he said.

“Another challenge would be to engage with the city councillors, with many not willing to work with us,” he added.

Dr Ng said under the Government Transformation Programme 2.0 or the National Blue Ocean Strategy, all government agencies should start engaging with the people.

“The NGOs are going to be the third force that can enhance their responsibility. They should start engaging with us rather than looking at us as troublemakers,” he said.

Dr Ng said between November 2014 and January this year, ICW has held six gotong-royong, anti-dengue campaigns and walkabouts to raise awareness on cleanliness.

“We have visited Jelapang, Buntong, Lim Garden, Taman Merdeka and Tambun,” he said.

“We want to work closely with the local councils and the state government by raising the public’s issues and providing solutions,” he added.

Dr Ng said ICW would hold several free forums for the public, including on the GST and stray animals, this month.

“We are also planning to have a forum on solid waste management in February where we will invite experts to talk,” he said.

Apart from the cleanliness of the city, Dr Ng said another concern that would be addressed by ICW is on safety.

“During the previous mayor’s time, he set up a lot of CCTVs in the city.

“We want to know how many have been installed now,” he said, adding that a city that was clean and safe would also help boost property prices.

“The number of street lights should also be increased, especially in areas that are frequented by drug addicts,” he added.

He also said that pedestrian walkways should be improved in the city.

“This is not only for safety but also to encourage people to walk and lead a healthy lifestyle,” he said.

He said ICW currently has 22 members and was looking to add more professionals to the group.

“I believe in quality rather than in quantity.

“We want to contribute through actions and not just by talking,” he said.

“The current group consist of members who are very active on the ground,” he added.