water world. riverine settlements such as this in Baram in interior northern Sarawak becoming inundated by severe floods over the past few days. pic by villager.

MIRI: Travelling by land into ulu Sarawak has become fraught with dangers, with daily risks of landslides, erosion of timber roads, and flash floods that can cut off entire stretches of roads and turn them into rivers of mud after just a short downpour.

The bad weather in the interior of the state now poses many risks when travelling but still rural folk commuting between their interior settlements and urban centres have no choice but to face such dangers as land transport is the only means of getting to the outside world.

In the Baram frontier of northern Sarawak, there are thousands of rural folk who commute daily between the ulu settlements and Miri City, and their travelling have been hit by constant disruption over the past few days due to severe floods. 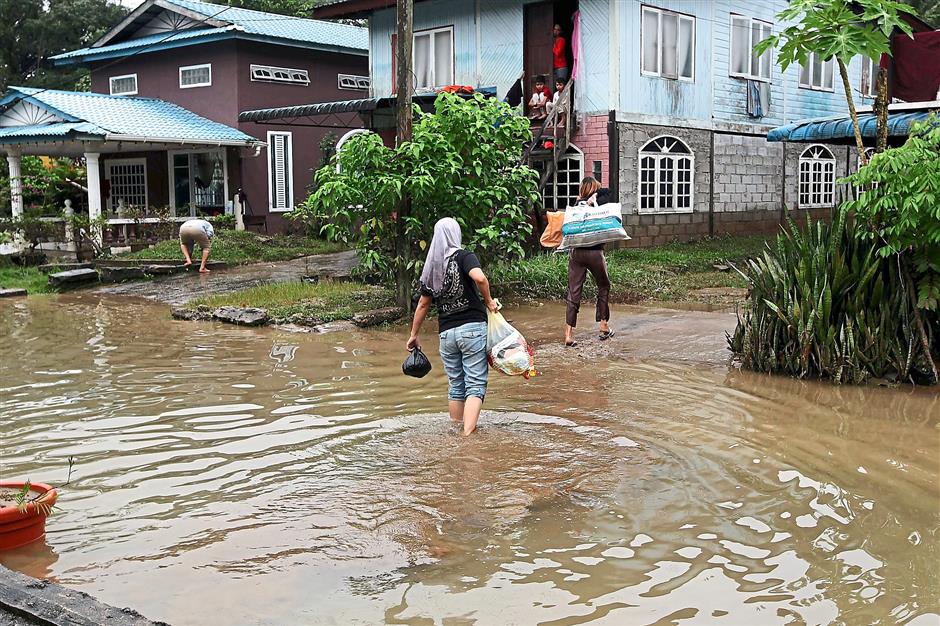 Happy, yet sad: Kampung Batu Kitang villagers going back to their flood-hit homes.

“Only heavy-duty four-wheel drives with high suspension wheels and trucks can ply the interior roads at the moment.

“Normal cars cannot navigate these rural roads for now. Many parts of the rural areas are affected by bad road conditions,” he said.

“There are daily risks of landslides, constant risks of serious land erosion along the timber roads and also people can get stuck inside flooded stretches because even a few minutes of very heavy rain can cause the rural roads in low-lying areas to suddenly become inundated.”

He said rural folk were having to face dangers daily when they were on these rural roads. However, many had no choice but to face such risks because they had to get to the towns to buy supplies and to handle important tasks like seeking treatment in hospitals.

Jau, who is from Long Laput, said his longhouse was also badly hit by the floods during the past few days.

In the meantime, people living in flood-hit longhouses are still in constant hardship as the river water that had overflowed the banks still inundate many of their living quarters. Back to school: SJK Chung Hua teachers cleaning classrooms after the floods have receded.

In Long Panai, Long Tungan and numerous other settlements located adjacent to rivers, the people there are still living in constant fear that their entire longhouse may be submerged if incessant rain continues.

Already several longhouses are submerged in waters of at least a metre deep.

Telang Usan State Assemblyman Dennis Ngau yesterday said the situation was very unpredictable at the moment as the weather in the interior could turn nasty at any moment.

“Some of the longhouses are still flooded, while in other places, the water levels have receded,” he said.

Nonetheless, all rural settlements in Baram are still under daily flood alert.

“The villagers there must be prepared for any eventualities and they must be ready to be evacuated even at an instant’s notice,” Ngau stressed.

Meanwhile, the authorities in Miri are helping the various government agencies in Marudi town to facilitate aid deployment into the ulu regions.

Miri City itself is not affected by the floods as yet even though there are occassional heavy downpours.