All set: Participants of the KLSCCCI’s Carbon Neutral Activities 2 – KL City Eco Charity Bicycle Ride getting ready for the flag-off.

Tourism and Culture Minister Datuk Seri Mohd Nazri Abdul Aziz said Malaysia was becoming a favourite destination for those who like to explore their surroundings on two wheels.

“From January to August last year, a total of 3,547 cycling tour packages worth RM700,000 were sold in the country.

“It is evident that cycling is becoming one of the pillars in promoting inbound tourism and minimising our carbon footprint,” he said in his speech at the Carbon Neutral Activities 2 - KL City Eco Charity Bicycle Ride organised in conjunction with KL Car Free Morning. 
Kuala Lumpur and Selangor Chinese Chamber of Commerce and Industry (KLSCCCI) president Datuk Ter Leong Yap said they organised the event for the second time after more than a decade to promote an environmentally sustainable lifestyle.

The first KL Eco Charity Bicycle Ride was held in Putrajaya in 2003.

“Back then, only 200 riders took part. I am happy to say that the number has more than doubled,” he said during the event at the Tourist Information Centre, which is housed in the iconic Sultan Abdul Samad building, recently. This follows the success of the KL Car Free Morning. From a monthly event, it has been extended to twice a month — the first and third Sunday — beginning this month.

“We will prepare more signs and safety guidelines for the benefit of cyclists and motorists sharing the road.

“We want more spaces in the city to be car-free, not just for cyclists but pedestrians. 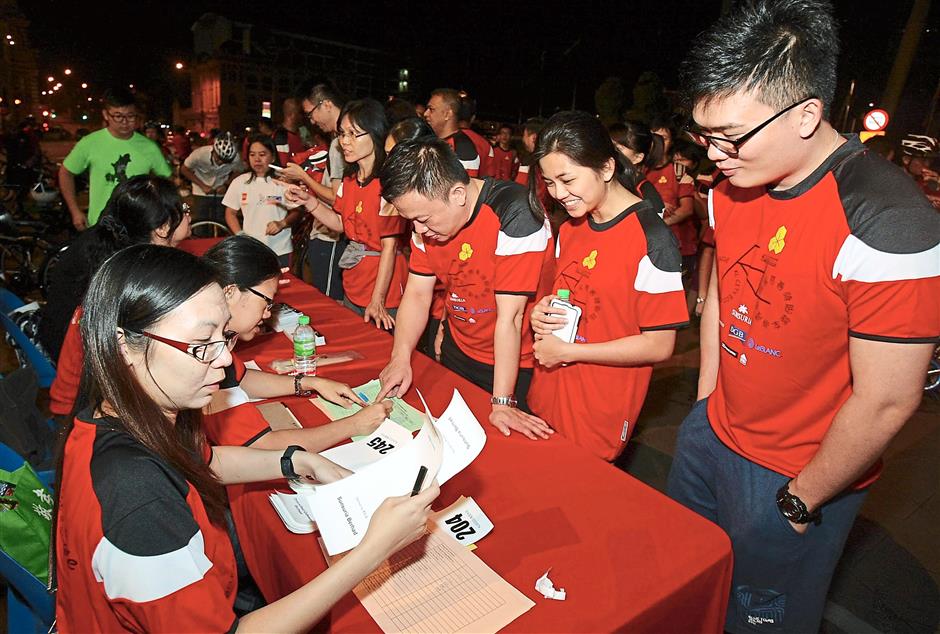 Good turnout: The cyclists registering for the ride.


“We also need to have more awareness campaigns for motorists to drive carefully for the safety of other road users,” he said.

Chinese ambassador to Malaysia Dr Huang Huikang who joined cyclists in the ride around the capital city said it was his first time riding in Kuala Lumpur.

“This is such a great opportunity for tourists to discover Kuala Lumpur’s modern and historical architecture.

“I would encourage Chinese tourists to visit the city in addition to Malacca.”