THE first floor of the three-storey Chemor Market, initially meant for market traders, has been unoccupied for years and has become a den for vice activities.

During a check by MetroPerak, the vacant room upstairs at the wet market, originally a surau, was strewn about with empty cans and candles, believed to be the work of drug addicts.

To make matters worse, there was a foul smell throughout the vacant floor, as well as faeces and filthy stains.

Steel shutters for each shoplot were also missing, along with the windows and several panels of the asbestos ceiling.

The second floor of the market building was found in the same dilapidated condition as well.

There are two markets located next to each other. The old one-storey Chemor Market was refurbished about a year ago while the three-storey Chemor market was built about seven-years ago and only the ground floor is utilised by wet market traders. 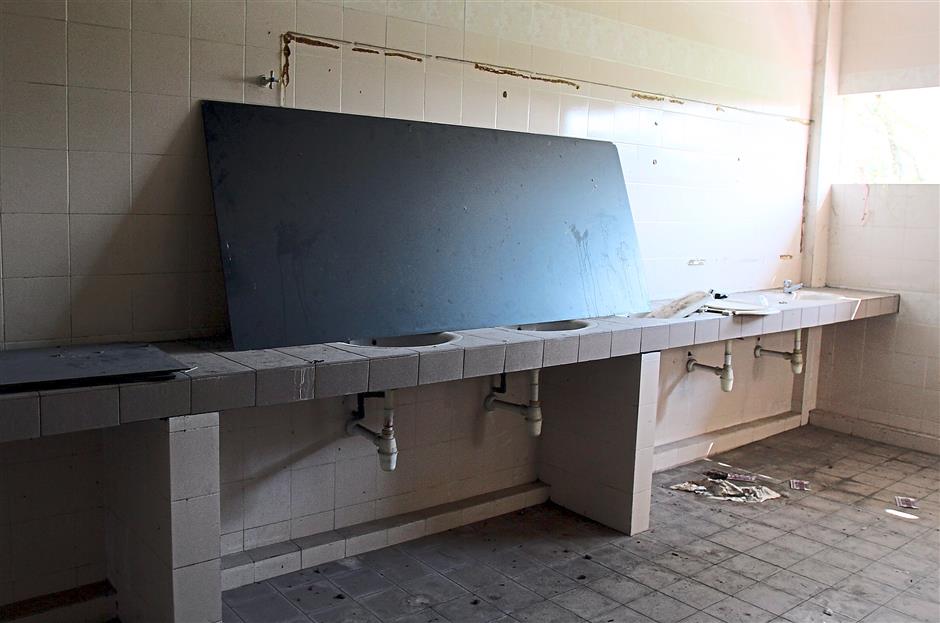 Poor state: A badly maintained toilet situated on the first floor of the three-storey market.

“It is a waste of space and funds because people do not usually go upstairs when they are shopping for groceries.

“This leads to a non-conducive environment for business, and several shopowners who had set up their tailoring business upstairs have moved out.

“Now, the first and second floor are abandoned, making it easy for vagrants to come in for a nap and for some to indulge in illegal activities,” he told MetroPerak when met at the market on Saturday

Questioning the practicality of the construction plan, Ismail lamented that it was clear that there was a dire lack of enforcement and maintenance at the market building.

“What is the next step for the Ipoh City Council to fully develop and utilise this three-storey market building?

“There must be some form of healthy engagement with the public, like a dialogue, to understand what we truly need when it comes to public amenities,” he said.

The newly-refurbished Chemor Market situated next to the present three-storey market building, which was refurbished a year ago, is under-utilised as well.

Ismail said apart from the ample space provided for day market vendors to set up their stalls, the shoplots that were available for rent were not fully occupied as well. Unoccupied: The rows of vacant lots found on the first floor of the three-storey Chemor Market.

“There are 13 stalls here, but only six of them are being used.

“As there is so much empty space, sometimes I see motorcyclists conveniently parking their motorcycles in here too, which should not be the case,” he said.

After sending countless emails to authorities regarding the issue since 2007, Ismail said he hoped for a proper solution from the city council to resolve his woes soon.

Committee member in the Chemor penghulu’s office Mohd Yunus Abdul Rahman, 48, also said he too had complaints on the poor design and lack of proper enforcement for the two market buildings.

“Even though there is space provided for them, some of the vendors still choose to operate by the roadside.

“Sometimes, they are even taking up space at vacant parking lots, causing unnecessary traffic congestion on the road in front of the marketplace,” he said.

Mohd Yunus added that there were even lamp posts erected on the road.

“This does not only add to the congestion of the already narrow road, but they are obstacles to motorists when they wish to park their vehicles there,” he said.

Meanwhile, fruit seller M. Krishnan, 64, said he was forced to set up his stall by the roadside because there was no proper place allocated for him.

“About a year ago, when they were constructing the 1Malaysia Hawker Centre across the road from both Chemor Markets, I, along with the rest of the roadside hawkers here, were promised shoplots by the authorities.

“They told me that we would have a nice, comfortable shoplot allocated to each of us to run our business,” he said.

“However, I did not get the shoplot as promised.

“Instead, I see the authorities actually giving priority to outside vendors.

“And apparently, I am not allowed to set up my fruits stall at the space meant for day market vendors either.

“What else can I do to continue earning a living but set up my stall by the roadside in front of the marketplace?” he said.

“We will also be working closely with the police over this matter.

“As for the plan to restore the first floor for traders to continue working there, the council secretary Mohd Zakuan Zakaria will be looking into this before we decide on our next course of action,” she said.

For the 1Malaysia Hawker Centre, Normala said despite the “promises” that were claimed to be made to the roadside hawkers previously, they are still required to file a formal application form to be a tenant.

“Advertisements for this were placed at the market and the penghulu’s office previously.

“We have received applications from over 100 hawkers and 30 of them have been given approval to start their business at the hawker centre,” she said.

Premises not put to good use