SIBU: Sarawak Central Region Hotel Association chairman Johnny Wong regretted that one of its members was alleged to have let out its premises for the operation of Internet gambling activity.

Wong said this in response to eight persons caught by the police last week from a hotel room after they were suspected of Internet gambling.

They have been detained for investigation.

Wong said the hotel concerned was a four-star one.

“Hotels letting their premises to conduct illegal activities are answerable to it.

“They cannot say they don’t know what is going on in the room. They should know no matter what,” he said.

According to him, it was not difficult to know suspicious guests.

“If hoteliers suspected that their guests are doing something not right, they should immediately take action instead of letting it be,” he added.

Wong said he was strictly against hotel premises being used for illegal activities. He had numerous times advised the members to cooperate by not letting their clients did as they liked. 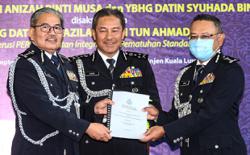