Life after the flood

MORE than a week after the deluge, shopowners have returned to the flood-ravaged Arena Square in Kuala Kangsar as the water levels have receded.

Although the lower-lying areas, where parking lots used to be, were still submerged, shops and stalls were considerably dry with brownish stains.

The once vibrant and bustling commercial area was chaotic as mud-laden debris was found strewn everywhere on the sidewalk.

The air was thick with the familiar smell of river water but the locals were undeterred, going about restoring order to their premises.

Some were seen scrubbing their tainted wares, while some were scooping watery dregs out of the drains.

Food stall owners were busy cleaning their crockery and cutleries and other people could be seen getting rid of the mud on floors using running water from a hose. Water everywhere: Part of the road at Arena Square is still flooded.

The 58-year-old owner of three shoplots in the arena bemoaned that he had a full plate since he returned to his shop to assess the damage.

“The water had receded yesterday and my heart ached when I saw the sorry state of my shops.

“I have only opened the steel doors of two of them, I have yet to open the third,” he said when met on Saturday.

Ng said he dared not calculate the losses once the cleaning process was done. 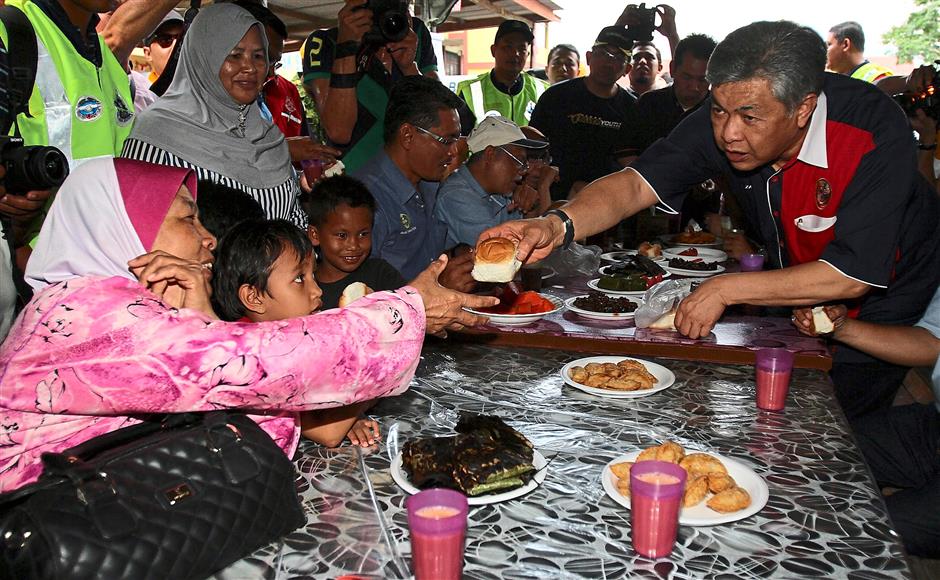 Here’s one for you: Ahmad Zahid distributing bread to the flood victims at SK Sayong flood relief centre.

“Everything that I sell is filthy because of the floodwaters.

“Even if I could scrub them clean, most of the equipment will have to be sold at half price.

“There is nothing more I can do to remedy my situation since everyone here has also been affected by the floods,” he said, adding that cleaning might take more than a week before business could resume.

The flood late last month had put Ng out of business for more than a week.

Some of Ng’s friends came to help him clean the equipment.

Just like Ng, pau seller Lee Chau Min, 59, was forced to evacuate for more than a week because water levels had risen to the roof of his shop. 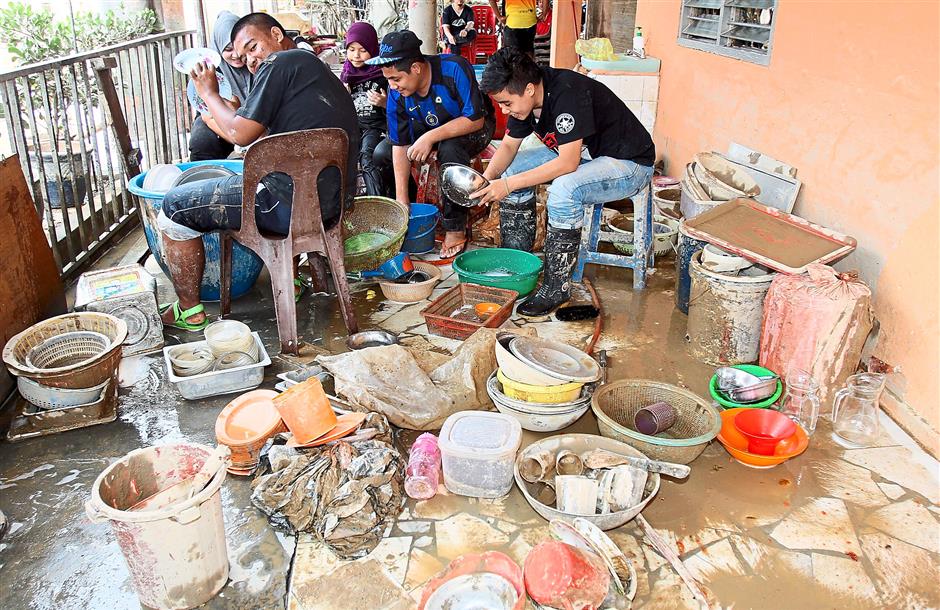 Lots of scrubbing to do: A restaurant owner and his family cleaning plates and cooking utensils.

“I have been worrying about the torrential downpours since the start of the monsoon season.

“The floods confirmed my worst fears and water gushed into my shop rapidly that day.

“Within half an hour, half of my body was already under water as my workers and I quickly rushed to take some of our valued possessions before being rescued,” he recalled.

Since then, Lee said he returned to the area to monitor the water levels everyday.

“As my shop is situated in a low-lying area, the water had only receded today.

“Many of my ingredients are gone, affecting 70% of my business,” he said.

When asked if he would consider moving to a new shoplot since his current premises was situated in a low-lying area near Sungai Perak, Lee said he had no such plans.

“I have considered it before, but I cannot find a strategic place.

“And even if I move, I worry that I may not be able to afford the new rent.

“I have also been selling paus here for more than 30 years. If I move, I might lose my regular customers as well,” he said.

As he could not operate his business for more than a week, Lee also said it would take roughly the same length of time for the repair and cleaning works to be completed.

“There is no electricity supply to the shops here too.

“We would have to wait for Tenaga Nasional Bhd officers to assess the condition of our wiring system,” he said, adding that he and his wife have had to live frugally according to their savings as a result.

Lee had braved through two major floods before this, in 1967 and 1993, and he said that this was the worst flood he had seen.

His three children, aged between 23 and 28, had also returned to the arena to help out.

Apart from the cleaning, some scavenged through disposed goods for hidden gems.

One of them was village worker Omar Pandak, 39, who had spent the last three days scouring for daily items such as clothes and shoes.

“These have been discarded by the shopowners because they thought no one would buy soiled items.

“I am sure that some of them can be salvaged after you disinfect them and wash the mud away.

“I am taking some of the shoes and clothes home for my wife and children so that we can save some money,” he said.

Kuala Kangsar was among some of the flood-hit districts in Perak last month, causing more than 1,100 people in the royal town to be evacuated.

The state had recorded more than 7,500 flood victims.