Exploring some notable features of the pidgin that is Manglish.

IN days of old, any intercourse – be it in trade or colonisation – between foreigners and natives inevitably spawned a pidgin, not a bird but a hybrid language, “a simple form of a language, especially English, Portuguese or Dutch, with a limited number of words, that are used together with words from a local language” (Oxford Advanced Learner’s Dictionary, 2010).

Creole – “a mother tongue formed from the contact of a European language with a local language (especially African languages spoken by slaves in the West Indies)” (Concise Oxford English Dictionary, 2004) – is a pidgin language.

The Manglish in Malaysia is a pidgin of sorts. Unlike pidgin, which is a blend of a European language and a native language of the relevant country, Manglish is made up largely (about 99% ) of English words, interspersed with elements from at least three of the main languages of the country (Malay, Chinese and Indian).

While the vocabulary may be largely English, the grammar is not, and sentence construction in Manglish almost seems to be without structure.

Contrary to what some people say or write, I maintain that Manglish is not synonymous with Malaysian English. The latter is pukka English.

Even though the standard of English in the country has declined alarmingly, there still are a great many Malaysians who speak (though with an accent not quite Oxbridge nor BBC) and write standard English that can easily pass muster in international circles.

On the other hand, Manglish may be deemed as the output from a mangle that has been fed a heady mix of words and expressions from English spiced with the odd word and expression from the local languages. The product churned out by the mangle and subsequently aggravated by mispronunciations is, in effect, Mangled English, from which we derive the portmanteau word Manglish.

Don’t get me wrong. Manglish is our beloved lingo that we Malaysians of all stripes – barring the snooty ones – use to make for humour or to show that we belong. No, it is not a language for academic purpose nor a medium for international communication!

While Malaysian English pays due regard to grammar and syntax, Manglish has utter disregard for gramma and grampa and what not. Discerning readers will have noted the influence of our local languages on the unusual constructions of Manglish.

Sentences with no apparent subject

Sentences may be constructed without an apparent subject. For an excellent example, I recall a movie review by Kee Thuan Chye – yes, the MOE page is his brainchild – who, in one of his humorous moments, wrote of the hero thus: “Shirt unbutton, chest can see.” (Yes-lah, got verb, no subject.)

The missing verb ‘to be’

The verb “to be” is commonly discarded, with no loss of meaning. Example: “She very sick yesterday.”

Verbs are commonly used in their base form. Auxiliary verbs in the usual sense are almost non-existent. Tenses are indicated by time markers (yesterday, today, last week, etc; for example, “She go market yesterday”) or by the use of the words got and done (see below).

Arguably, the best known enclitic in Malay is lah, which, in pre-Malindo writing, was tagged onto a preceding word by a hyphen ( ) The same enclitic lah appears in Manglish (and I shall indicate its use as in the pre-Malindo Malay script, i.e. connected to the preceding word by a hyphen). The said enclitic is lexically empty, but it softens the tone of a command or lends a touch of politeness touch to a request (Come on, hurry up-lah).

The particle deh, of Indian/Tamil origin, is not quite an enclitic. It is a space-filler. It may even be deemed an inconsequential form of address (Deh, where you go last night?)

The word can is an auxiliary verb but in Manglish it is used in ways not quite auxiliary. Example: “This chair very rickety, but can do”, meaning that the said item suffices or serves the purpose.

The cartoonist Reggie Lee has added a hilarious slant to the expression can or not. At the time when two Malaysians were training in Russia to join a space mission, his cartoon depicted four spacemen garbed in their respective spacesuits and floating in the nothingness of space. The Russian spaceman was labelled as COSMONAUT, the American as ASTRONAUT, the Chinese as TAIKONAUT, and the Malaysian as CAN-OR-NOT!

The case for ‘got’

The verb got is a strange critter even in standard English. In British English, it is both the past tense and the past participle of the verb get, as in the set get/got/got. The corresponding conjugation pattern in American English is get/got/gotten. The normal meaning of get is “to obtain, to acquire”.

In British English, however, has got does not necessarily mean the present perfect tense “to have obtained, to have acquired”. Instead it can be deemed an idiomatic expression, meaning the simple present tense “to possess”, e.g. “I have not finished the work. I have got only two hands.”

‘Done’ as an auxiliary verb

In standard English, the word done is the past participle of the lexical verb do. In Manglish (of the Malacca variety), it is an auxiliary verb to convey the perfect tense (he done go to town).

There are some words from Malay which are used in Manglish but, strangely, with reversed signification. One such word is pinjam, which means “to borrow” or “to lend”, depending on context. The dual but opposite meanings give rise to ambivalence when translated into English and used carelessly. The following two examples illustrate: (1) “I want to lend (intended meaning: borrow) your bike, can or not?”; and (2) “Can you borrow (intended meaning: lend) me 10 ringgit?”

Another Malay word used in Manglish but with skewed signification is belanja, which means “to spend” or “to give a treat (to)”. A foreigner would no doubt be taken aback to hear the following invitation: “Lunch at Anjong Budi. Come-lah. I spend you.”

And then there are the words and expressions that have been tweaked or invented for effect. I offer the following four examples for your amusement: (1) at-home, an invented compound verb used in welcoming a guest into one’s house, as in: “Please at-home yourself”; (2) died-ed, a verb used as the double past tense of die, as in: “What? You donno about Michael Jackson-ah? He died-ed last year.”; (3) gostan, a tweaked word derived from go astern, which can be used when guiding a friend backing his car into a narrow cul-de-sac: “Gostan some more until you hear a bang.”; and (4) “Those two guys no manners-one. Always ride motorbike two abreast and talk. Should ride motorbike one abreast.”

Dear readers, you got understand my article-ah? If yes, you pobbably Malaysian. If blur, you pobbably foreigner. For foreigner, get Malaysian to teach you-lah. Very easy-one, like kacang only. 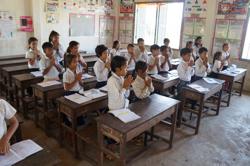