Our columnist Down Under is taken by just how incredible fairytales can be.

The new Australian English curriculum has raised the bar on many things. One of them is imagination. It calls for students, at primary and secondary levels alike, to be imaginative and creative.

While I marvel at the call, I also wonder what one can do to acquire imagination and creativity.

“They better start reading fairytales. The Brothers Grimm or Hans Christian Andersen will be a good start,” my son’s English teacher said during the information night.

What a fantastic idea!

I love the fact that the teacher has suggested these two authors. They are indisputably classics. Anything that can happen, happens in a fairytale, and they happen most interestingly under the most fusty, whimsical and, at times, alarming conditions, making them all the more convincing and uncontrived.

The plausibility of something bizarre happening thrills a child as much as it stretches his mental boundaries. The child can believe that a dragon can be a hero, just as a thug can win the heart of a beautiful princess.

Faith, doubt and optimism, pessimism oscillate wildly in fairy tales, and any outcome is possible.

In the world of fairytales, a child will feel unconfined. When asked to write, a child familiar with fairytales will discard convention and embrace originality.

He is encouraged to freely characterise, to push the boundaries of ingenuity, and through this process, a child gyrates towards a larger imagination and more creativity, two qualities that are usually more innate than honed.

In the end, in terms of the big picture, a child learns to take in come what may and learns that what might come can be highly unpredictable and uncanny.

Fairytales can be, at once, exciting, grotesque, humorous and fast moving.

Any story is as good as the one before it, so it is not hard to imagine the astonishment of a child who opens a seemingly boring book only to be awestruck instantly by these words in Hans Christian Andersen’s Sweethearts: “A top and a ball lay in a drawer among the other toys, and then the top said to the ball, ‘Why don’t we be sweethearts, since we are lying here in the drawer together?’ But the ball, which was made of Morocco leather and had as high an opinion of herself as an elegant lady, refused even to reply to such a suggestion. The next day the little boy who owned the toys came in.”

Here is a genuine storytelling voice – composed, convincing and straightforward. And with that, a child believes in what he is reading. He may even peer into his drawer to spy on his own top and ball, imagining them to be talking together and marvelling at what a snob his ball is.

Daily objects come alive in the world of fairy tales, humans become animals and vice versa, and highly plausibly, too.

In these violent times that we live in, when children are constantly exposed to brutality and indecency, it is a matter of grave importance that we place our children back into fairytales simply to allow them to believe in the triumph of love over cruelty, morality over lewdness, humility over self-importance, and restraint over lavishness.

Really, they do; fairytales do portray such triumphs, which are rarely taught and hardly existent in the kind of electronic games kids play these days.

Of course, fairytales aren’t for children only. I read that they were originally written for adults, who in turn read them aloud to children, just as I still do to my own children.

Adults like myself, deep down, do hanker for a break, a pause between each pressing quarter on the clock or a chance to elope into the unknown, for what’s known in the world is way too unbearable sometimes. If you agree such pressing moments exist and they call for fantasy, there is a book for you: Helen Oyeyemi’s Boy, Snow And Bird.

Within this book all the whimsical qualities and the underlying terror of those stories that begin with “Once upon a time ...” appear dramatically and sinisterly to woo adults who wish to take an unapologetic break from the mundane world of adult fiction.

So listen (though these are not Oyeyemi’s exact words): Once upon a time, there was a girl called Boy Novak. Boy is the daughter of Rat Catcher, who abuses her. Boy flees and moves to a new time in hopes of finding beauty, but fate has a way of tricking pitiful people. Boy ends up a wicked stepmother to a winsome stepdaughter, Snow Whitman.

Hence begins a warped version of the classic fairytale Snow White. Oyeyemi is not a conformist. She twists and turns, making her own version darker, more complicated, with a touch of magical flow that makes picking up the book each time a magical moment, and the reading experience a mesmerising beauty.

When Snow gives birth to a daughter called Bird, a host of other fairytale elements of familiar aesthetic emerges. Unlike Snow, Bird is dark-skinned, revealing her father’s African-American ancestry.

Naturally, Snow and Bird receive vastly different treatment at home and around town (though not always in the ways you might expect).

It is a drama that involves stepsisters, an obsession for and the tyranny of the mirror, from which each character asks for power, not beauty.

You can well imagine how thrilled I was when, having read Oyeyemi’s version of Snow White, I later read to my daughter the Brothers Grimm’s version at her bedtime.

> In one of Hans Christian Andersen’s fairytales, there is a story called The Most Incredible Thing. To Abby Wong, fairytales themselves are incredible things in life. Share your favourite fairytales with her at star2@thestar.com.my. 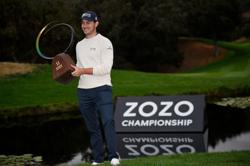 Cantlay charges on back nine to win Zozo Championship