Six divine Hindu temples to check out on your travels 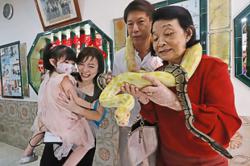 Visiting a house of worship while on holiday at a new destination often gives travellers the chance to experience new cultures, as well as learn about the history of a place.

This also allows some travellers to get in touch with their spiritual side.

Ever thought of visiting a Hindu temple abroad? Many ancient Hindu temples around the world still exist today and they usually come with fascinating historical backgrounds. Tourists come from far and wide not just to pray and pay obeisance to the gods at these temples but also to admire the architectural marvels.

Apart from checking out the architecture and learning about the history of the place, some people also visit temples to view its statues, icons and paintings, listen to sermons (usually held during major religious observances) and even to have their star charts read.

To some people, Hindu temples give off a good, positive energy and visitors who go may sometimes feel a bit of the same energy too.

If you’re interested in visiting Hindu temples around the world – and in Malaysia – you can start off with these six iconic ones.

You have probably never seen a temple that’s entirely made of glass ... unless you’ve been to this special one in Johor Baru.

Almost a century old, the Arulmigu Sri Rajakaliamman Glass Temple is a feast for the eyes, for sure. In 2010, it was listed in the Malaysia Book of Records for being the first glass-themed temple in the world.

The temple was first constructed as a shelter in 1922, which then slowly turned into a sanctuary not just for Hindu worshippers but people of other faiths too. In 1991, Guru Bhagawan Sittar became the temple’s chief priest and transformed the place into what it is today.

If you are seeking some spiritual guidance, take a tour of the world-renowned temple, where it is open for visitors daily between 1pm and 5pm. For devotees, the Arulmigu Sri Rajakaliamman temple opens from 7am till 10pm each day. Reputedly one of the earliest Hindu temples to exist in India, the Meenakshi Amma Temple in the bustling town of Madurai gets thousands of visitors every day.

The temple houses various shrines and is dedicated to Lord Shiva (Sundrareswar) and goddess Parvati (Meenakshi).

The most magnificent feature of this holy place is the four towering gateways that are emblazoned with thousands of colourful sculptures. And right in the middle of the 6.5ha temple, you can find a sacred golden lotus pond overlooking the monumental entrance tower (also known as the gopuram).

There is ample space at the mandapas, otherwise known as pillared halls or choultry, for tourists to unwind after a leisurely stroll around the temple.

Meenakshi Amma is also a favoured location for weddings, as it has the perfect balance of indoor and outdoor spaces.

Visitors can drop by the temple as early as 5am every day. It opens until noon, and then closed for four hours before opening again to the public at 4pm; it closes at 10pm. You can request for a tour of the place by a local guide for an even better experience. Expect to spend at least two hours exploring the temple.

Another famous Hindu pilgrimage site is the San Marga Iraivan Temple located on the Hawaiian island of Kauai in the US. Walking into this beautiful building nestled in the lush greenery of the island can make you feel like you were teleported back in time over 1,000 years.

The name “Iraivan” means lord or “He who is worshipped” in Tamil. It is said to be the oldest word for God in the language. The San Marga Iraivan Temple is dedicated to Lord Shiva.

The building is made completely out of white granite stone and is manned by Kauai’s Hindu Monastery and Kauai Aadheenam.

There are two “musical pillars” with rods surrounding them in the temple. Take a closer look at the pillars to see six lions carved into them, each with a stone ball in its mouth. These musical pillars are usually tapped or played like musical instruments to accompany chants and devotional performances in the temple.

The intricately carved bas-relief walls, beams, and ceiling slabs feature images which convey a series of teachings, including Hinduism, metaphysics and philosophy. This breathtaking masterpiece was completed in 1995 to fulfil the vision of Pramukh Swami Maharaj, who wanted the mandir or Hindu temple to be a space that offered spiritual guidance to the community.

The Swaminarayan Mandir, constructed and funded by the Hindu community, is said to be the first classic Hindu shrine found in Europe.

Some 5,000 tonnes of Italian carrara and ambaji marble were hand-carved by a team of 1,526 artisans in India before being transported to London for the construction of the temple. The building was made without the use of steel or iron, which is considered a grand architectural feat today.

Apart from being a place of worship, BAPS is also a multi-functional cultural centre that is used by the community as an assembly hall, gymnasium and library, among others.

There’s also an exhibition to promote the understanding of Hinduism installed at the complex. The place is open daily from 9am to 6pm.

Imagine this: A Hindu temple that sits atop a rock on the bay, with the view of the deep blue ocean on one side and a mountainous view on the other. This surreal image can only be found and experienced in Sri Lanka.

Located at the head of Konesar Malai, a large rock in north eastern Sri Lanka, the classical-medieval Koneswaram temple features a beautiful statue of Lord Shiva.

This religious landmark was built more than 2,400 years ago, to honour the Lord Shiva. Crowds of worshippers flock to the temple during festivities like Deepavali, Karthigai Deepam (usually celebrated at the end of Deepavali) and Thaipusam.

You can find relics of the original ancient temple that were found and restored about 60 years ago, displayed here. The temple is open from 6am to 1pm, and 4pm to 6.45pm every day. Sri Lakshmi Golden Temple is a 15-year-old temple located in the foothills of Thirumalaikodi, Vellore in Tamil Nadu, India. The construction of the gold leaf-covered building was executed by a charitable trust called the Sri Narayani Peedam and led by spiritual leader Sri Sakthi Amma, better known as Narayani Amma.

Spanning 40ha of land, the iconic building is covered in gold to honour the goddess of wealth, Sri Lakshmi Narayani. The main temple is surrounded by water, and its pillars feature carved golden statues of elephants. Before you go: How to dress when visiting a temple

If you are interested in visiting a temple, or any place of worship for that matter, do wear the appropriate attire. This means that you would need to be properly covered up: No shorts for both men and women, no revealing clothes like mini skirts, tight dresses, or sleeveless tops.

In some places, you would also need to wear the right footwear (the general rule is “no slippers/thongs”), and women and girls would need to wear a head covering (scarf or pashmina, rather than hats or caps).

Do check first on what you can and cannot wear to the place of worship you wish to visit before going there as each one may have a different set of rules.

Also, some places do not allow photography or video recording at certain areas of a temple/mosque/church. Do check with your guide or an official from the place you are visiting for more information on the dos and don’ts.

What to see and do in Istanbul and Ankara, from culture and art to fat cats

6 popular hot springs around the world Malaysians can visit 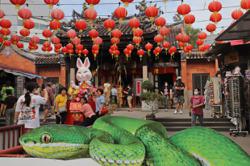 INTERACTIVE: The Year of the Rabbit
Malaysian traveller discovers heaven on Earth in the Maldives
You can travel the world to see all the 12 zodiac characters
Add 'seeing emperor penguins' to your bucket list for travel
These Malaysians went to the 'Top Of The World' before the pandemic hit
Portugal opens new hiking trails in the Algarve
Things you can do in California that do not involve celebrity spotting
3 out-of-town gems around Ipoh you can visit
The old world charm of Ipoh: What to see, do and eat in the city
Spain's stargazing haven of La Palma reopens its observatory