Beyond Pangkor's sun, sea and beaches

Diamond in the rough: Just like the different facets of a jewel, Pangkor has many sides that can only be fully revealed if you take enough time to explore it.

It would not be surprising to think that a day trip is sufficient to uncover all of Pulau Pangkor’s attractions. After all, the island is a small place, inseparable from the 27km ring road circling the borders of its 8sq km land area.

To discount it so easily, however, would be a mistake, as Pangkor does punch well above its weight in terms of the diverse experiences it can offer.

The island has thus far adapted to the modern times at an unhurried pace, alongside maintaining its quaint appeal and safeguarding its natural treasures. It’s admittedly seen its fair share of issues in the past, especially when it comes to pollution and development, but there have at least been consistent efforts to safeguard its natural heritage.

Although interest has surged to an all-time high, after official affirmation that Pangkor will be duty free in January 2020, most visitors would still be hard pressed to name other attractions, aside from the beaches.

And it’s a crying shame.

A major selling point is the island’s proximity to Peninsula Malaysia. Located roughly halfway between two of the country’s busiest city centres, Penang and Kuala Lumpur, Pangkor is a good option to escape the rat race of urban life, especially with the significant infrastructural developments cutting travel times and easing access into the area.

Surrounded by a cluster of smaller islands including the world-famous Pangkor Laut, Pulau Mentagor and Pulau Giam, it goes without saying that there’s a lot on offer for lovers of sea-based activities. Watersports galore: Snorkelling and diving, jet skiing and banana boating and island hopping are staples for any island trip.

Snorkelling and diving, jet skiing and banana boating and island hopping are staples for any island trip, but city folk in particular might want to fork out some money to visit the smaller islands nearby for well-deserved peace and tranquility.

A major differentiating factor for the Pangkor - aside from its distinctive pink taxi vans - is that it boasts one of our country’s most biodiverse flora and fauna populations, both on land and water.

Among the most interesting activities you can consider is the unique half-a-kilometer walk on the seabed from Teluk Nipah to Pulau Giam. The annual low tide phenomenon, which typically occurs during the Chinese New Year period, sees the sea level dropping low enough to reveal a watery ‘path’ that you can walk across for a different vantage point - sans snorkelling gear - of the corals and aquatic life along the way.

Do keep an eye out for the weather and the changing tides, or you could find yourself stranded on the island with no way back and deprived of food, drink and network coverage to boot. 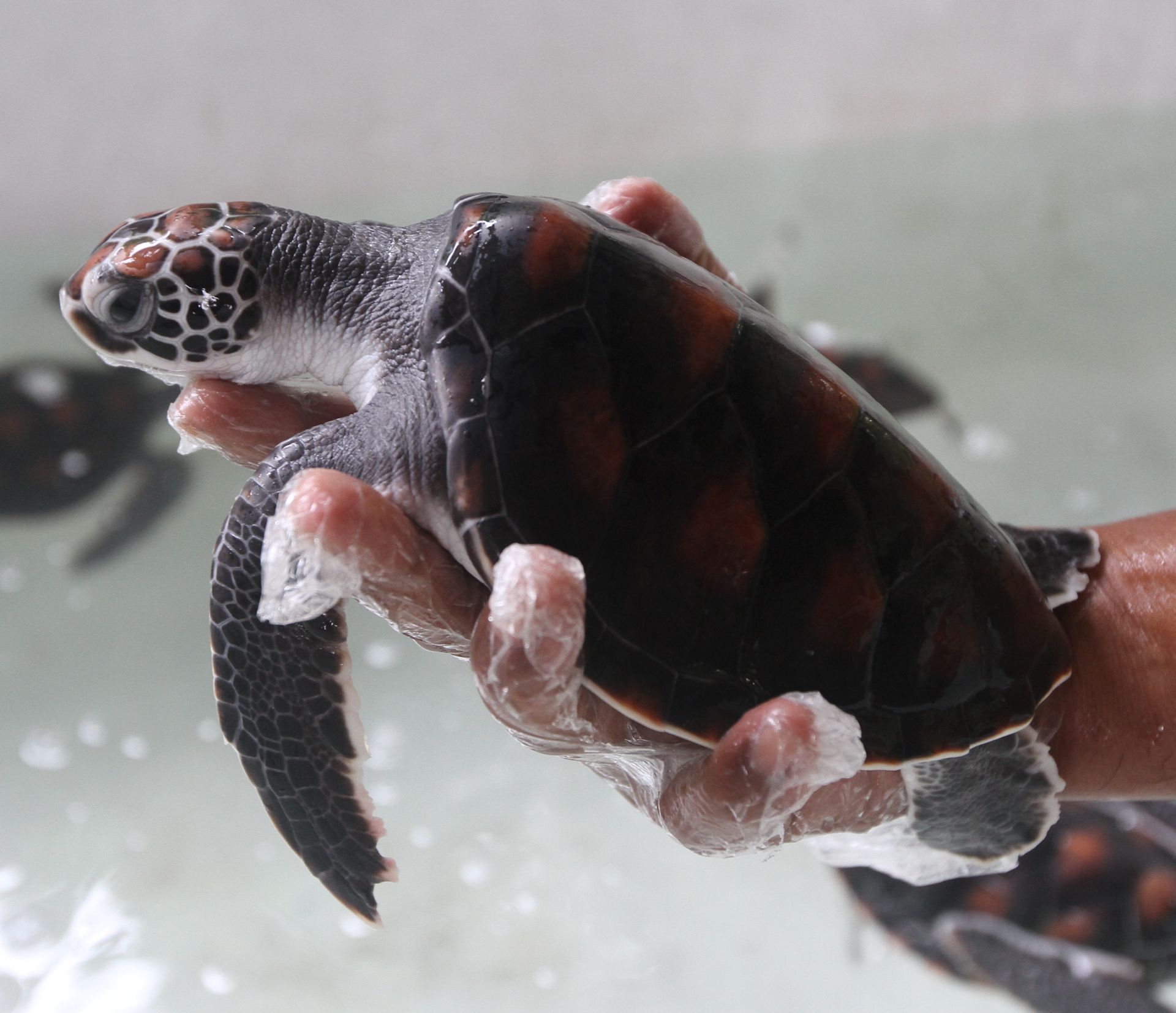 Rare experience: Observe the baby turtles at the turtle hatchery in Teluk Ketapang before they’re released into the ocean.

If you’re a marine life enthusiast, another must-visit is the turtle hatchery in Teluk Ketapang, an initiative that’s being spearheaded by locals. If you’re lucky, you might get the chance to observe the baby turtles before they’re released into the ocean. It’s a pretty rare experience, as the only other turtle hatchery on the west coast is said to be the Segari Turtle Sanctuary in Lumut.

Equally remarkable is the island’s three virgin forest reserves. These reserves are believed to be millions of years old, which means they could number among the region’s oldest tropical rainforests.

Pangkor’s biodiversity is common knowledge among the academic or scientific circles, especially when it comes to shorea lumutensis. Commonly known as balau putih, the rare timber species is a particular source of pride for Malaysians in the know. 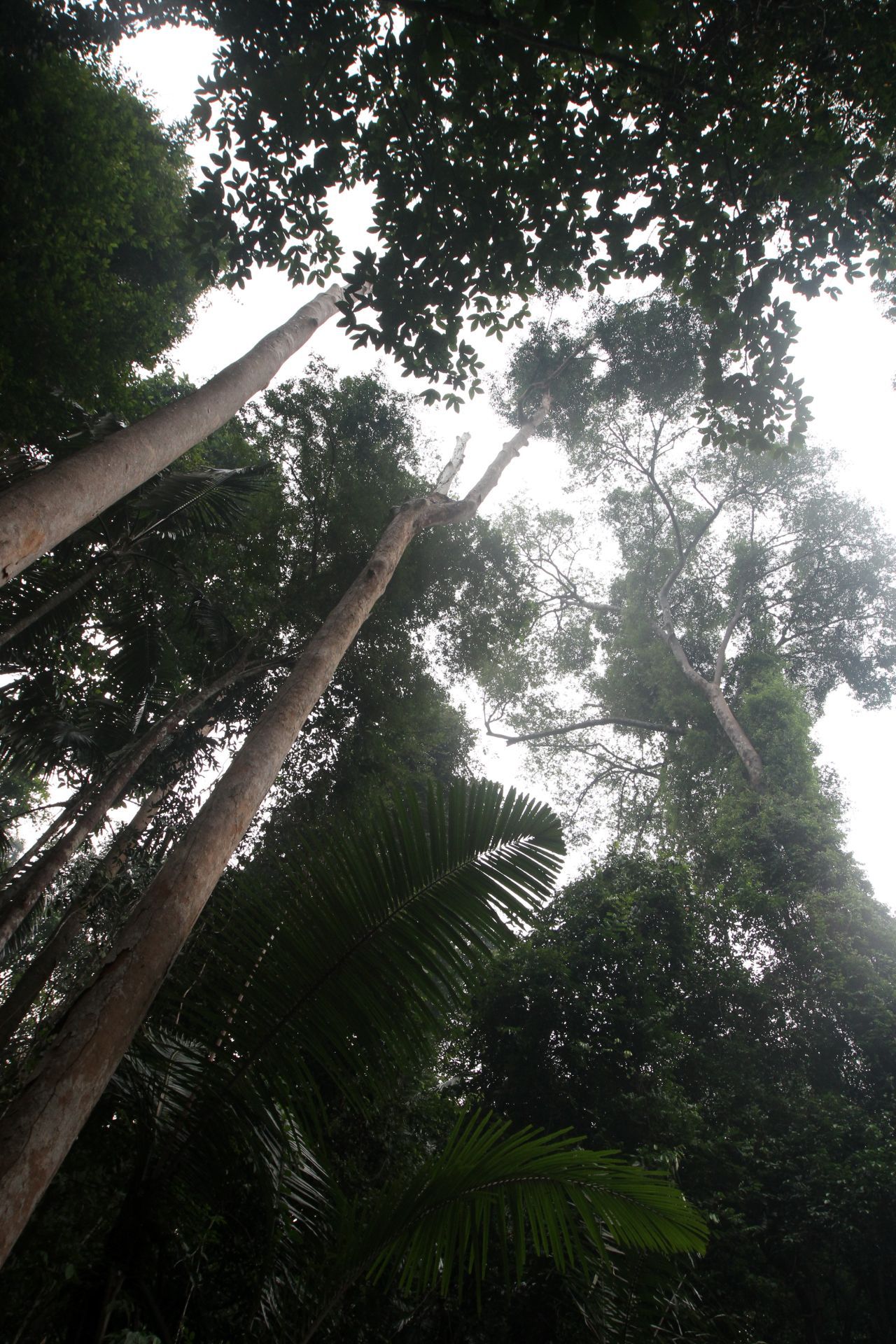 Natural wonder: The island’s three virgin forest reserves are believed to be millions of years old, which means they could number among the region’s oldest tropical rainforests. 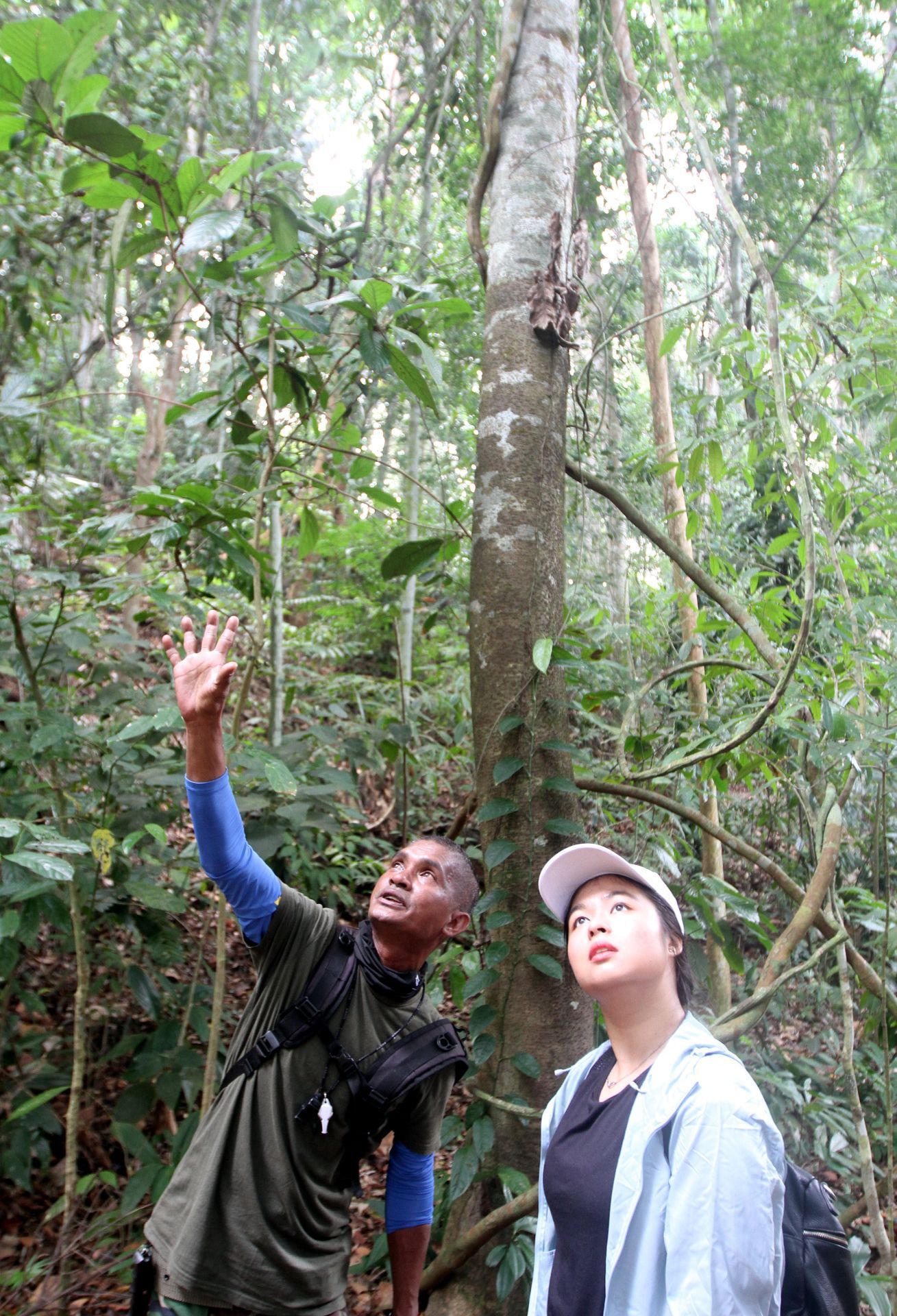 A walk on the wild side: Opt for an educational trek or hike through the leafy canopies of Pangkor's rainforests to learn a bit more on its wonders of nature.

The tree, characterised by its distinct bark that contains resin, only exists in three places in Perak, one of them being in Pangkor’s Sungai Pinang Forest Reserve. It’s also been categorised as critically endangered by the International Union for Conservation of Nature.

So if you’re looking for a different experience off the beaten path, look no further than an educational trek or hike through the leafy canopies of these rainforests to learn a bit more on the wonders of nature.

Aside from its ecotourists, history buffs will also find much of interest on Pangkor,

An important locale that marks several notches for significance in our country’s past, it’s most notable for being the island the 1874 Pangkor Treaty was named after, with every Malaysian knowing the significance of the agreement to Malaya’s history.

Before that watershed moment, the island once served as a base for the Dutch during the 17th century. Having conquered Melaka, they had their eye on monopolising Perak’s lucrative tin trade, in an attempt that eventually failed.

Known today as the Dutch Fort, the base built in Kampung Teluk Gedung was left abandoned until it was partially restored in 1973. Another footnote in history that you can see on the island today is a short 100m walk away from the site, where a large rock – now called Batu Bersurat Belanda – sits. The rock, which bears the date 1743, is also inscribed by other graffiti made by Dutch soldiers stationed there during that time.

Although Pangkor has seen moderate development since to keep up with the changing times, the island has nonetheless managed to retain the quaint charm of its history as a fishing settlement.

The result is a unique fuse of architectural styles, with a blend of older structures nestled among more modern buildings. The same can be said for its combination of traditional and modern industries. Idyllic charm: Take your time exploring the small alleys in the village and enjoy the idyllic island life.

For a quick insight into the daily lives of Pangkor’s locals, opt for a morning stroll in the fishing villages such as Sungai Pinang Kecil. Take your time exploring the small alleys in the village; some will lead to areas where fishermen dock their boats in preparation to sell the day’s catch or mend fishing nets, while others may open up to new roads and shops to stop by for a bite to eat.

Around 30,000 residents live on the island, with a large number inheriting the generation-old skills and plying the trade passed down by their ancestors in fishery-related industries.

Even today, you can drop by to visit one of the three remaining factories dedicated to the craft of traditional shipbuilding, such as Hoo Huat Boat Builder, or venture into the dried fish factory and shop of Hai Seng Hin Enterprise to see how the snacks are made and more importantly, to buy souvenirs for family or friends!

To avoid disappointment, it’s best to call ahead of time to make sure they’re informed of your visit, especially for the latter stop. 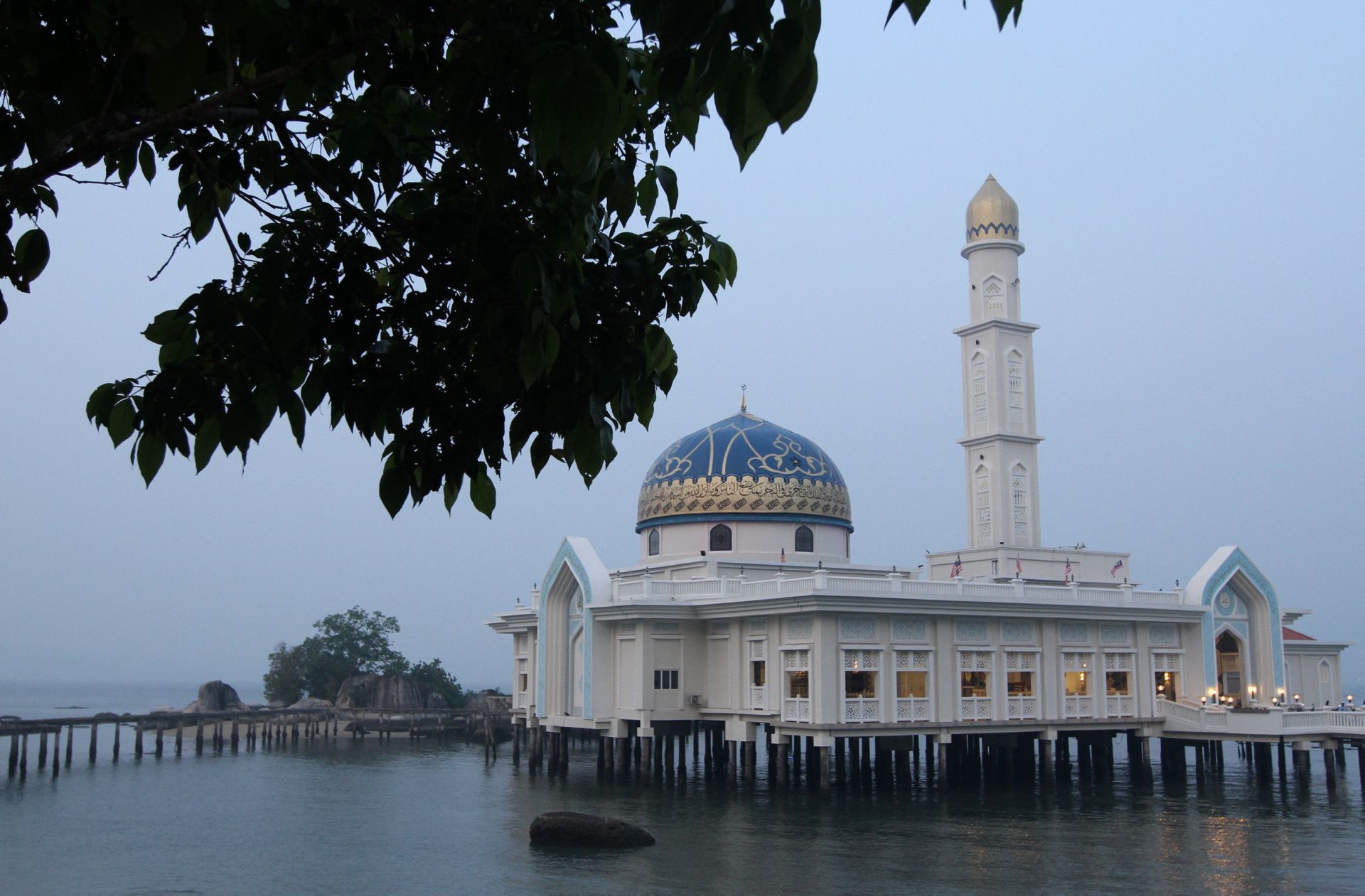 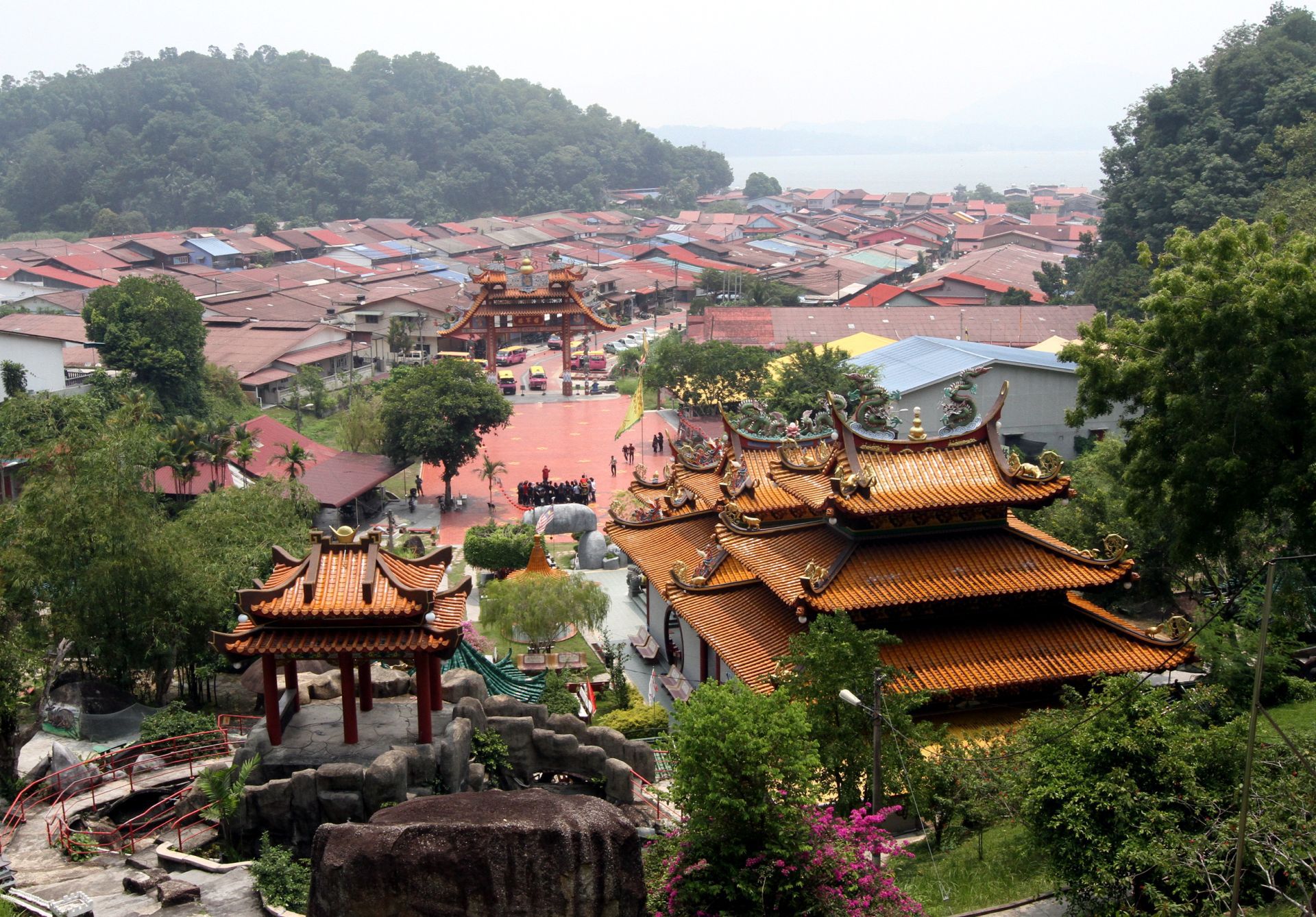 Worth the effort: It might take some time and effort, but climb up the stairs towards the back of Fu Lin Kong temple to gain access to a beautiful view of the island’s landscape.

During the day, you can also drop by the temples of Lin Je Kong or Fu Lin Kong, not only to enjoy the colourful surroundings and details of the architecture, but for a bird’s eye view of the island’s landscape if you’re up for a brief climb uphill. While it is relatively new, the Sri Pathira Kaliamman Temple located by the sea is also worth a visit for its colourful designs and wide view of the ocean.

To top it off is a special highlight in the form of Perak’s very own floating mosque, the Masjid Al-Badr Seribu Selawat. Remember to time your visit just right when making plans. The best time to arrive would be just around sunset, so you can see the monument by day and then watch it light up after dark.Establishing a home base

As for the pièce de résistance, don’t forget to dig into the abundance of fresh seafood including fish and prawns every chance you get - you won’t regret it! The fare, usually served up with a local flair by the island’s residents, might also be a eye-opening take on dishes you find familiar.

So if you’re a foodie, it might be well worth your while to plan a road trip to discover the delights of food and drinks unique to the island.

While attractions are the main draw in travel destinations, it’s a fact that your accommodations during the trip also has to live up to expectations – in terms of creature comforts, convenience and pricing – for a truly satisfactory trip.

Aside from hotels, Pangkor has a range of other alternatives to choose from, including tourist suites, studios and resort stay accommodations.

Such accommodations are being developed at the Pangkor Resort World situated along the prime beachfront area of Pasir Pantai Bogak, so do keep an eye out for its ongoing Villaku ResortStay project. The resort stay, which will offer value-for-money resort-style accommodations to private owners and commercially operated businesses, is expected to be completed by end-2020.

Times are a-changin’ with all these new happenings. Just like the different facets of a jewel, Pangkor has many sides that can only be fully revealed if you take enough time to explore it. At the end of the day, beyond the allure of sun, sea and its well-known sandy beaches, Pangkor is a trove of treasures simply waiting for you to discover. 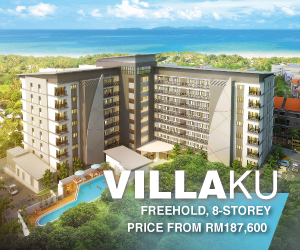