No prizes for guessing which Leonardo work is the star of this digital reproduction exhibit at KL's National Art Gallery. Photo: Bernama

In just 10 days, more than 15,000 visitors have thronged the National Art Gallery (NAG) in Kuala Lumpur.

The draw? Leonardo da Vinci is in town.

There’s an Italian-made touring exhibition, featuring digital reproductions of 17 of the master’s works, including his first painting, Annunciation (circa 1472) and the more popular ones, like The Last Supper (c. 1495) and Mona Lisa (c. 1503).

Perhaps, we should say that everyone’s at the NAG because Mona Lisa has come a-calling. She’s proving to be quite a hit at this exhibition, with an endless stream of selfie-ready visitors flashing smiles to rival hers.

Here’s your chance to take photos of – or with – the true-to-scale reproduction of the famous lady herself.

Does it matter that it isn’t the real Mona Lisa but a mere reproduction – albeit, a high-quality one? Judging by the numbers, the answer is no.

It is a record-breaking feat for the NAG since its relocation to its current address in 2000, with visitor numbers hitting the four digit mark every day since the exhibition opened on July 15.

The Leonardo da Vinci name is a great pull, and the exhibition is attracting many people who don’t often go to art museums and galleries, if at all. These reproductions of Leonardo’s paintings have practically blitzed social media in Malaysia. No prizes for what is the most popular work.

If you didn't know better, you'd think NAG opened a bubble tea cafe. There is word that NAG might extend its gallery hours to cater to the hordes.

Most new visitors to NAG were also willing to pay for this exhibit, clearly not aware that this is a free admission art institution. Malaysians actually putting value to art? That's food for thought.

One of the show’s early visitors, Timothy Johnson and his family, for instance, have been to art exhibitions abroad, but they have never stepped into the NAG. 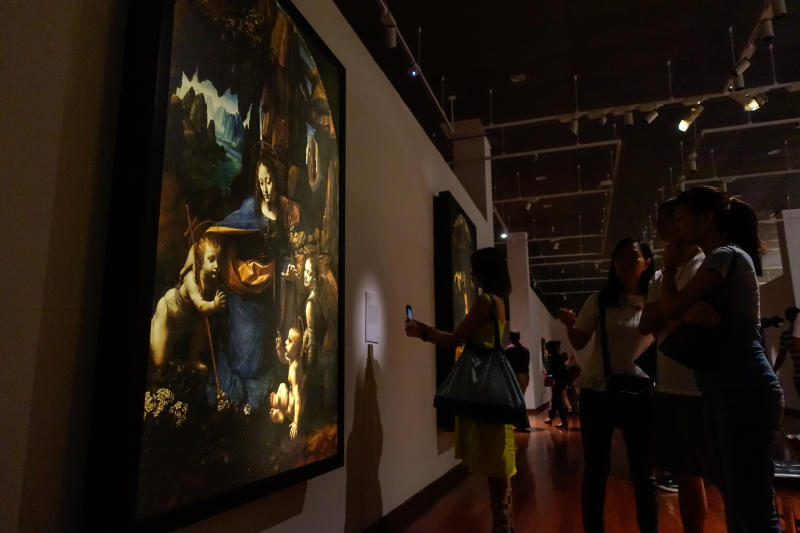 The daily walk-in crowd for Leonardo Opera Omnia has broken NAG's attendance records, with 15,000 through the door in the exhibit's first 10 days. Photo: Bernama

Until Leonardo Opera Omnia, that is.

“It doesn’t matter that we only get this (repro) exhibition in Malaysia. This show is an innovative and ambitious project which aims to share Italian art and cultural heritage made possible through digital paintings. Ashamed to say that this was our first time visiting the National Art Gallery but I’m glad that we did. While the main show is the Leonardo one, there was quite enough of good local flavour to keep us occupied including some emerging local artists,” says Johnson, senior vice president, marketing, product and partnerships at INTI Education Group.

And would Johnson visit the NAG again, even after this Leonardo exhibition is over?

“I’m always looking out for new stuff so I will definitely return to the gallery with my five-year-old daughter, who really enjoys art. Besides the Leonardo da Vinci show, we also checked out the other exhibitions while we were there,” he adds.

Even Rembau MP Khairy Jamaluddin popped in for a look at the exhibition.

He posted on Facebook: “Exploring Leonardo Da Vinci’s Opera Omnia at our very own National Art Gallery. Amazing works of art brought to our doorstep. I urge all of you to visit our National Art Gallery and indulge in this fantastic piece of history.”

Kelvin Oon, a freelance photographer, admits that purists will not even bother with such a show. 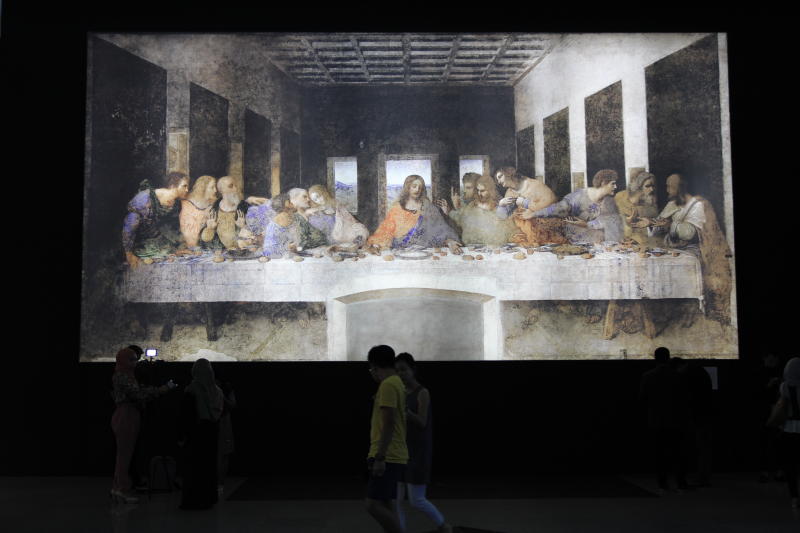 Leonardo's monumental mural The Last Supper is the pride of the dining hall at the monastery of Santa Maria delle Grazie in Milan, Italy. In this exhibit at NAG, the entire mural has been reproduced in accurate detail. Photo: Low Lay Phon/The Star

“This sort of exhibit will divide opinion. The art community will say it is wasting gallery space. On the flipside, the art newbie and the ordinary public will be thrilled to see such a show. It’s great to see NAG so busy ... in fact, buzzing!” says Oon.

“It’s like a ghost town here on most weekends, and suddenly there are thousands of people. If it takes a reproduction show to get the masses through the door, I’m all for it,” he adds.

Seira Sacha, a lawyer, reckons the NAG needs this unexpected boost in attendance.

“Art is for all. And yet it seems that nobody knows about the existence of NAG. Most people don't even know where it is. It’s a big shame,” says Seira.

“With all the Insta feeds filled with Leonardo (at NAG) selfies and photos, especially from young people, I’m hopeful there will be a new audience clued in on what’s happening at NAG. Even the KL Biennale didn’t create such a frenzy! There is a demand for art. Make no mistake here. The pressure, in a good way, is on the NAG programming team to keep this momentum going with more interesting exhibits, and not rely on reproduction shows,” she adds.

Leonardo Opera Omnia, conceived by the Italian public television subsidiary RaiCom with the support of the Italian Ministry of Foreign Affairs and International Cooperation, is presented here in collaboration with the Embassy of Italy and the National Art Gallery. It is curated by Prof Antonio Paolucci.

Cristiano Maggipinto, ambassador of Italy to Malaysia notes that Leonardo is considered one of the greatest geniuses in the European Renaissance. 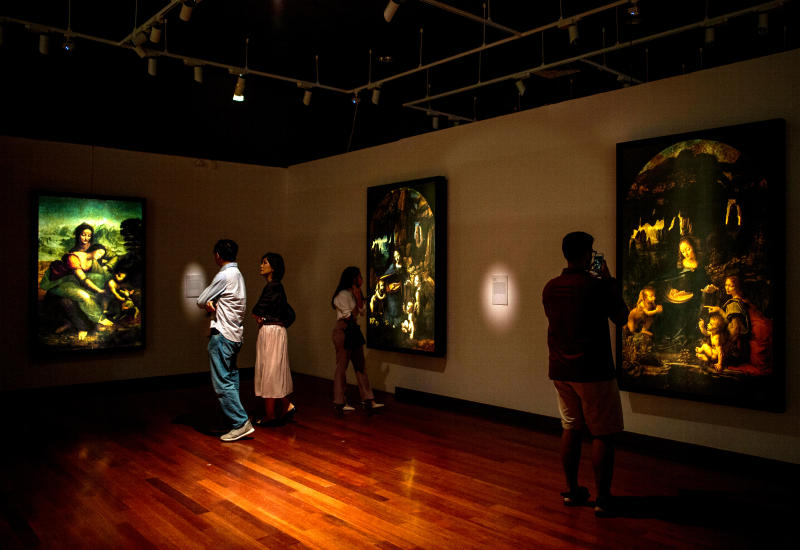 The exhibit brings together 17 works from Leonardo, which are rarely seen together. Photo: Bernama

“He was not only a painter, he was also an architect and a scientist. With the paintings (reproductions) in this exhibition, we also show his study on how birds fly, and how they can be applied to machines. He wanted to know everything so he studied everything. If there is one word I would use to describe him, it would be curious,” he says.

Amerrudin Ahmad, senior curator at NAG says that the exhibition is truly one for the public at large.

“This is not an ‘show for artists’; it is an exhibition for the masses and it has indeed been attracting people from all walks of life. Leonardo’s original works are scattered in different countries around the world, so it is a great opportunity to see the reproductions of all these works in one place. As a national gallery, one of our objectives is to educate. This exhibition is a good introduction to Leonardo’s work, not just his paintings but beyond that,” he says.

The exhibition includes Leonardo’s Codex On The Flight Of Birds, where he outlined his observations of bird flight and pondered on the possibility of human mechanical flight.

Discussions are ongoing for similar exhibitions to be shown in the future, featuring greats such as Italian Renaissance painters Raphael, Botticelli and sculptor Donatello.

This year marks the 500th death anniversary of Leonardo da Vinci, and events are being held all over the world to commemorate this occasion.

In October, the Louvre in Paris will present Mona Lisa: Beyond The Glass, its first VR experience, where visitors will be able to interact with Leonardo’s masterpiece.

Obviously, if the Louvre itself can present a VR show on its prized exhibit, it goes to underline the fact that art can be explored and enjoyed in many different forms.

For now, there are thousands still expected at NAG’s Leonardo Opera Omnia, and if some of them decide to return for other art exhibits there, we can thank dear ol’ Leonardo.