Tourism Malaysia is looking at attracting more West Asian tourists to the country to achieve its tourism target for 2019.

Malaysia is the top destination country among Saudi Arabia travellers, with Kuala Lumpur topping the list of holiday destinations. This is according to a study from travel booking platform Agoda.

Meanwhile, Langkawi Island in Kedah is in the 10th spot of preferred vacation venue. It was also revealed that KL made the top 10 destinations of choice for travellers from the Middle East.

The federal state moved up one rank from last year’s ninth spot to the eighth place this year.

The data came following the recent launch of the KL-Sharjah flight by Air Arabia. The route marked the first time ever a low-cost carrier connects Malaysia directly to the United Arab Emirates (UAE) and the Gulf Cooperation Council region.

Present to greet the arrival of the passengers from the inaugural flight in KL recently was Tourism, Arts and Culture Minister Datuk Mohamaddin Ketapi.

He said the presence of Air Arabia in the country was timely in the run-up to Visit Malaysia 2020 (VM2020).

“This year, our target is to have 337,000 tourists from West Asia region, and I believe the establishment of Air Arabia’s Sharjah-KL route will help increase tourist arrivals from this region,” he said.

The direct flight was a result of the minister’s official visit to Dubai during the Arabian Travel Mart held in April earlier this year, whereby a joint tactical campaign agreement was signed with Tourism Malaysia, Malaysia Airports and Air Arabia.

Air Arabia group chief executive officer Adel Abdullah Ali said the introduction of the service will be beneficial for both countries.

“We are confident this new service linking the two cities will further strengthen the trade and tourism ties between both nations,” he said.

Sharjah is a neighbouring city of Dubai and the third largest emirate of the UAE.

Air Arabia is the first and largest low-cost carrier in the Middle East and North Africa.

Tourism Malaysia is looking at attracting more West Asian tourists to the country to achieve its tourism target for 2019.

Last year, Malaysia recorded RM3.1bil in tourist receipts from West Asia, a growth of 32.9% as compared to the previous year. As of March 2019, tourist arrivals from West Asia countries to Malaysia registered a total of 65,202.

For VM2020, the country is targetting 30 million international tourist arrivals. 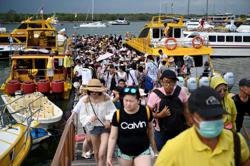