Top 4 states and districts to visit in Malaysia in 2019

Be sure to visit the Sabah Agriculture Park when you’re in Tenom. The venue holds plenty of marvelous flora.

Every year, some states and destinations in Malaysia will hold year-long travel campaigns to entice travellers from near and far. The spotlight this year goes to Sarawak, Melaka, Rompin in Pahang and Tenom in Sabah.

Sarawak and Melaka will be hosting its Visit State Year while Rompin and Tenom are hosting Visit District Year for 2019. We take a look at some exciting attractions to look out for when you travel to these destinations.

It’s fitting that the tagline of Visit Sarawak 2019 is “More to discover”. As Malaysia’s largest state, there are plenty of attractions to check out in the Land of the Hornbills.

Sarawak has always been associated with great outdoor adventure. It is home to many national parks, wildlife sanctuaries, nature reserves and majestic caves.

The Mulu National Park was recognised as a Unesco World Heritage Site in 2000. Here is where visitors can find the Deer Cave which has the world’s largest cave passage.

For a sight of the orangutan in its natural habitat, the Batang Ai region is the place to be.

Of course, Sarawak is also known for its rich culture and Iban longhouses. Make your way to one at Batang Ai to experience the traditions and lifestyle of the tribe.

For something a bit more condensed, visit the Sarawak Cultural Village whic is located on the foothills of the mythical Mount Santubong.

Meanwhile, the capital city Kuching offers a mix of architectural designs that showcas Sarawak’s colonial past and multiracial background. Fort Margherita is a picturesque hilltop fortress with a past. Travel around the city to discover an array of museums and delectable cuisines.

Melaka has indeed stood the test of time. From its beginning as a great trading port, the historical state is one of the most popular destinations in the country. Interest in the compact state was further piqued when it was made a Unesco World Heritage Site in 2008.

Historically, Melaka had some of the earliest contact with foreign powers in the country. If you stroll through the city today, you will see influences of its colonial past in its architecture and culture. Influences range from the Portugese, Dutch and English.

Melaka is home to an array of unique buildings that reflect its colonial past.

The A’Famosa, Stadhuys, Christ Church and St Paul’s Church are some of the most recognisable sights in the country. Many of Melaka’s colonial wonders are concentrated in the city centre, making it easy to see everything in a single day.

Its colonial past aside, Melaka is also known for its glimmering Malay sultanate. You can experience the royal glory at the Melaka Sultanate Palace, a wooden replica of Sultan Mansur Shah’s 15th-century palace.

Another popular venue is Jonker Walk, although many locals might have polarising views about it.

Located in the southeastern corner of the largest state in the peninsula, the district of Rompin is home to picturesque islands and lush greenery. The main tourist attraction here would be the resort island of Tioman.

A perennial presence on best-of lists, Tioman Island is a tropical paradise. Here is where visitors can find refreshing waterfalls, adventurous jungle hikes and laidback villages.

There is also the Endau-Rompin National Park within the district. The remote wilderness of the park is a perfect setting for many plants and animals to thrive.

The seaside town of Kuala Rompin is the gateway to both the park and the island.

The town is known for its freshwater prawns.

The months of September and October are the best times to visit for a taste of succulent seafood from the Rompin River, Nenasi River and Anak Endau River.

You might know Tenom by the name of the coffee you’ve been drinking. In fact, visitors will find several coffee factories in town. But there is more to this district in Sabah than a cup of joe.

For starters, Tenom is considered the unofficial capital of the Murut community.

Be sure to visit the Sabah Agriculture Park when you’re in Tenom. The venue holds plenty of marvelous flora.

Pesta Kalimaran, the annual Murut festival, is held with great festivity in the heart of town on March 31. Visit during this time to experience the vibrant culture of the indigenous group.

Other primary tourist attractions here are the Sabah Agriculture Park, Tenom Orchid Centre and Murut Cultural Centre. The adventurous ones might want to head to Padas River for some whitewater rafting.

Tenom is a two-and-a-half hours’ drive from Kota Kinabalu. The Tenom railway station is the last stop on the Sabah State Railway.

Top 4 states and districts to visit in Malaysia in 2019 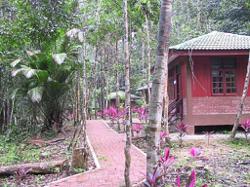