Phu Quoc in Vietnam beckons with sandy beaches and a safari

One of the many humourous touches at the JW Marriott Phu Quoc. — WONG LI ZA/The Star

When I mentioned to some friends that I was going on a trip to Phu Quoc, most of them went, “foo what”?

That was not unexpected as the island, Vietnam’s biggest, is a relatively new but fast booming tourist destination.

Recently, AirAsia became the first airline to connect Malaysia to Phu Quoc, with its inaugural direct flight from KL taking off on Nov 2.

Members of the media from Malaysia, Singapore, Indonesia, India and Australia were invited for a trip to find out what the island had to offer. The trip was also supported by Vietravel and Accor Hotels.

Phu Quoc, pronounced “fu kuok”, means “fertile or prosperous” (phu) and “nation” (quoc). Populated by around 120,000 inhabitants, it is slightly smaller than Singapore at 596sq km.

The island’s economic activities have largely centred on fishery and agriculture. However, in recent years, the area has seen rapid development as a tourist destination, with a variety of luxury 5-star resorts making their presence, as well as an upcoming casino, some shopping malls and theme parks.

Quite impressive, considering that it was only in early 2014 that the island first enjoyed stable electricity supply, with the installation of a 57km-long undersea cable from Vietnam’s mainland to connect Phu Quoc to the main electrical grid. 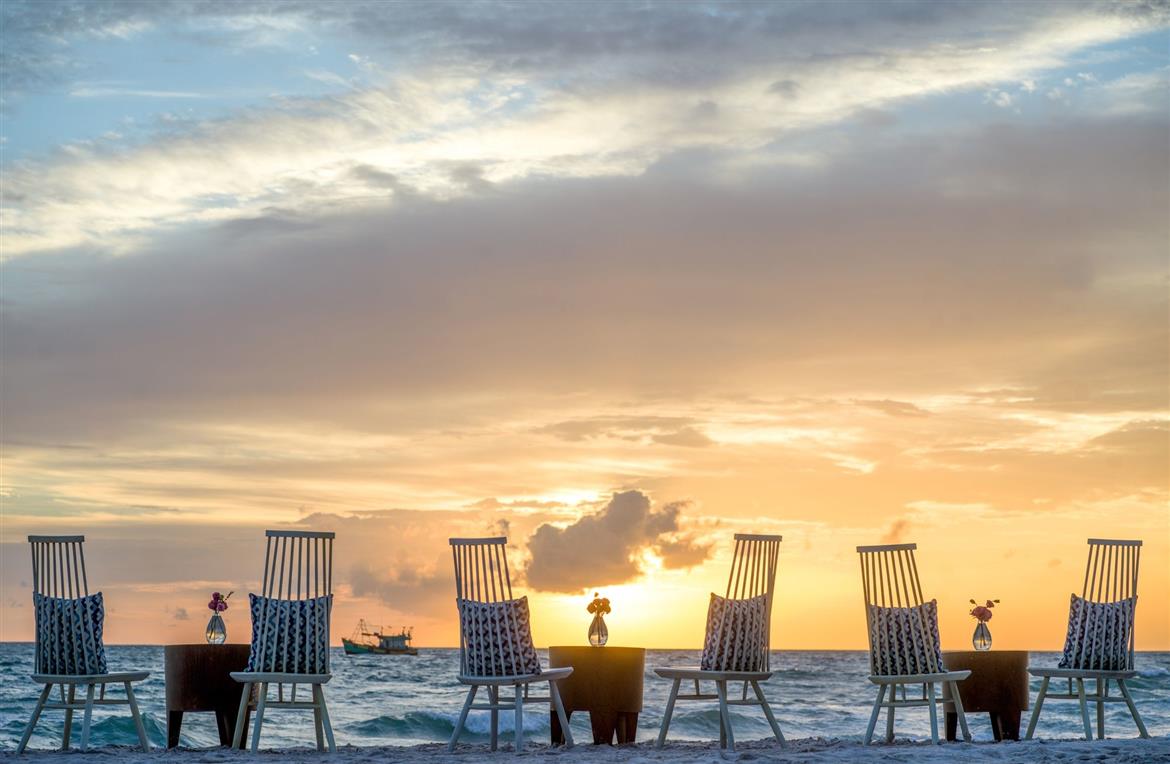 The island’s charm lies in its 150km coastline along with around 20 white sandy beaches that include Sao Beach on the southern east coast, and Long Beach, which stretches 20km west of the island.

Currently, half of the island is designated as a national park set within the Kien Giang Biosphere Reserve. Phu Quoc is also rich in marine life, with a variety of coral species, making it a popular haunt for snorkelling and diving enthusiasts.

The best time to visit the island is from November to April, during the dry season. 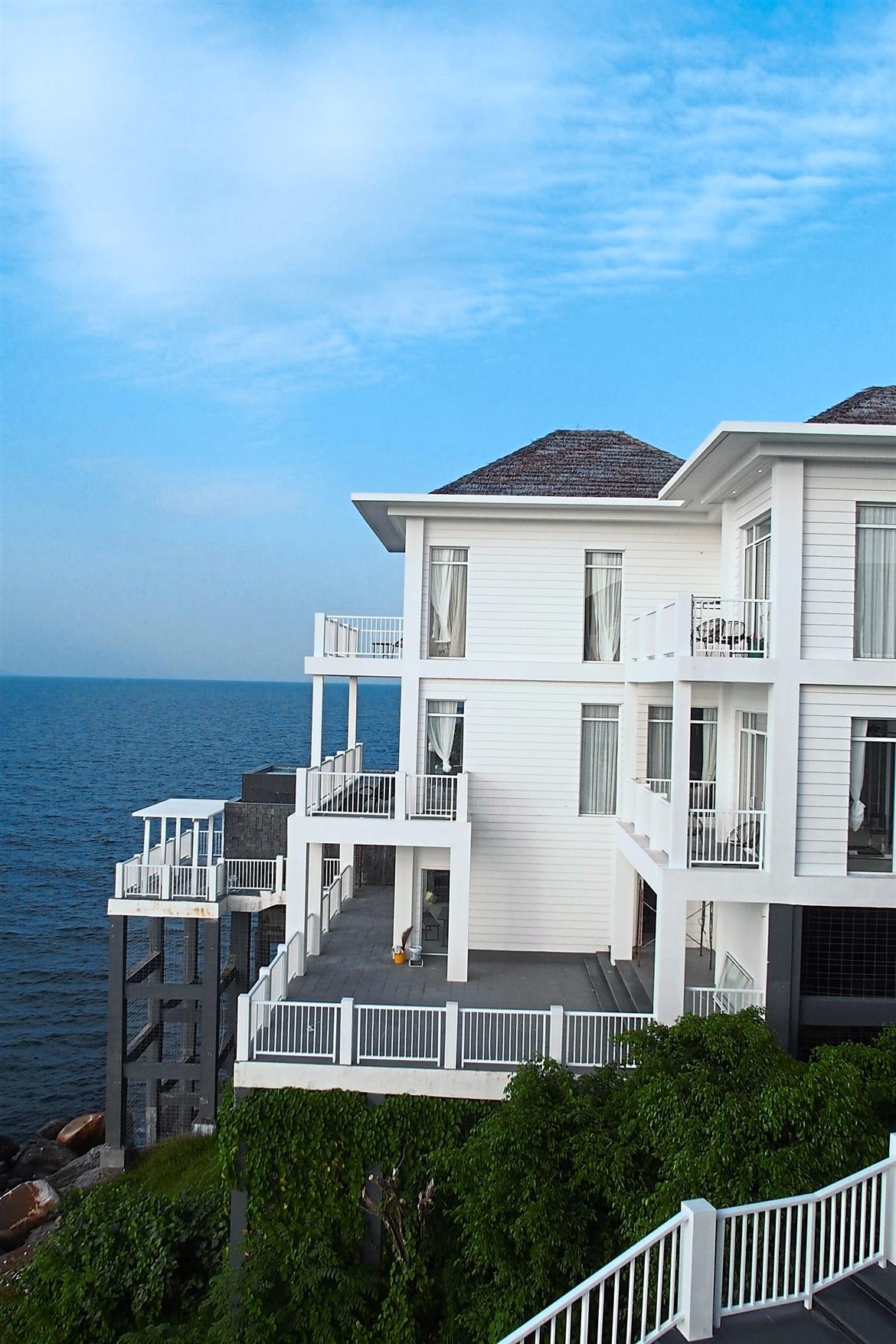 One of the sea-facing villas in Premier Village Phu Quoc Resort.

We arrived on a sunny Friday afternoon at Phu Quoc International Airport. The airport opened in 2012, marking the start of higher tourist arrivals.

After reaching Premier Village Resort, we were taken on a tour of its premises. The property is situated on Ong Doi Cape on the island’s peninsula at the south, which means visitors get the rare chance to catch both the sunrise and sunset.

Our dinner was then hosted at the JW Marriott, which was truly one-of-a-kind, much unlike the hotel chain’s other properties.

Designed by world-renowned American architect and interior designer Bill Bensley, the resort’s concept is based on a fictional, restored university campus established in the 1890 by French naturalist and philosopher, Jean Baptiste Lamarck.

Let’s just say the place is pure paradise for design enthusiasts and Instagrammers alike, with unparalleled attention to detail, whimsical humour, and a crazy power of imagination.

Getting to know the island

Well-known as a key attraction on the island is the Hon Thom Cable Car, which holds a Guinness World Record for the world’s longest non-stop, three-rope cable car.

Having just opened in February this year, it is almost 8km long, connecting An Thoi town on the south – the island’s second biggest town – to Hon Thom island, also known as Pineapple Island.

The 25-minute ride is a scenic experience, offering an aerial view of fishing boats dotting the glistening waters and the quaint makeup of An Thoi town.

Upon arriving at Sun World Hon Thom Nature Park, white sandy beaches and swaying coconut trees await. In the near future, a water park, theme park and aquarium are all set to open consecutively in 2019, 2020 and 2021. 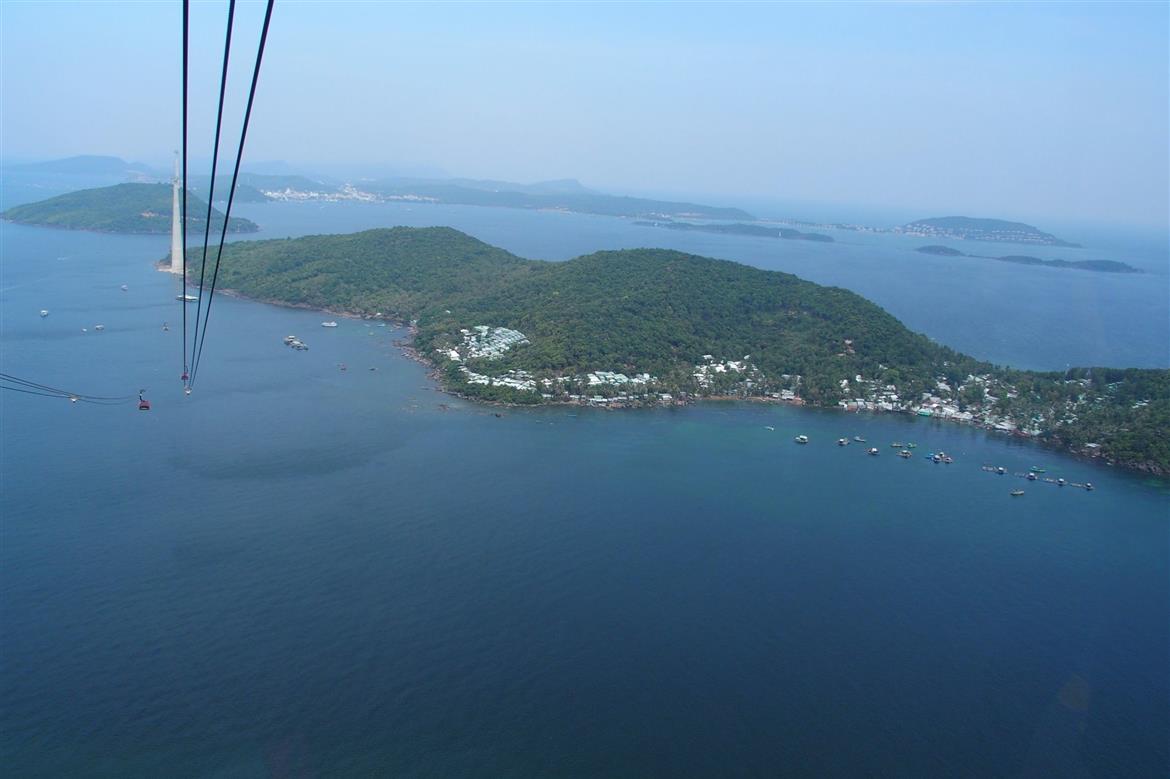 View from the Hon Thom cable car, which connects An Thoi town to Hon Thom Island.

After lunch, we headed back to the main island to get a taste of some local culture and delicacies.

The island has always been the go-to place for local Vietnamese to get the best fish sauce, made by fermenting fresh anchovies and salt.

Then in 2012, its fish sauce gained more attention when the European Union awarded the island’s fish extract the Protected Designation of Origin (PDO) recognition, the first product in ASEAN to qualify for the status.

The PDO is conferred on products whose quality or properties are determined by their geographical environment. 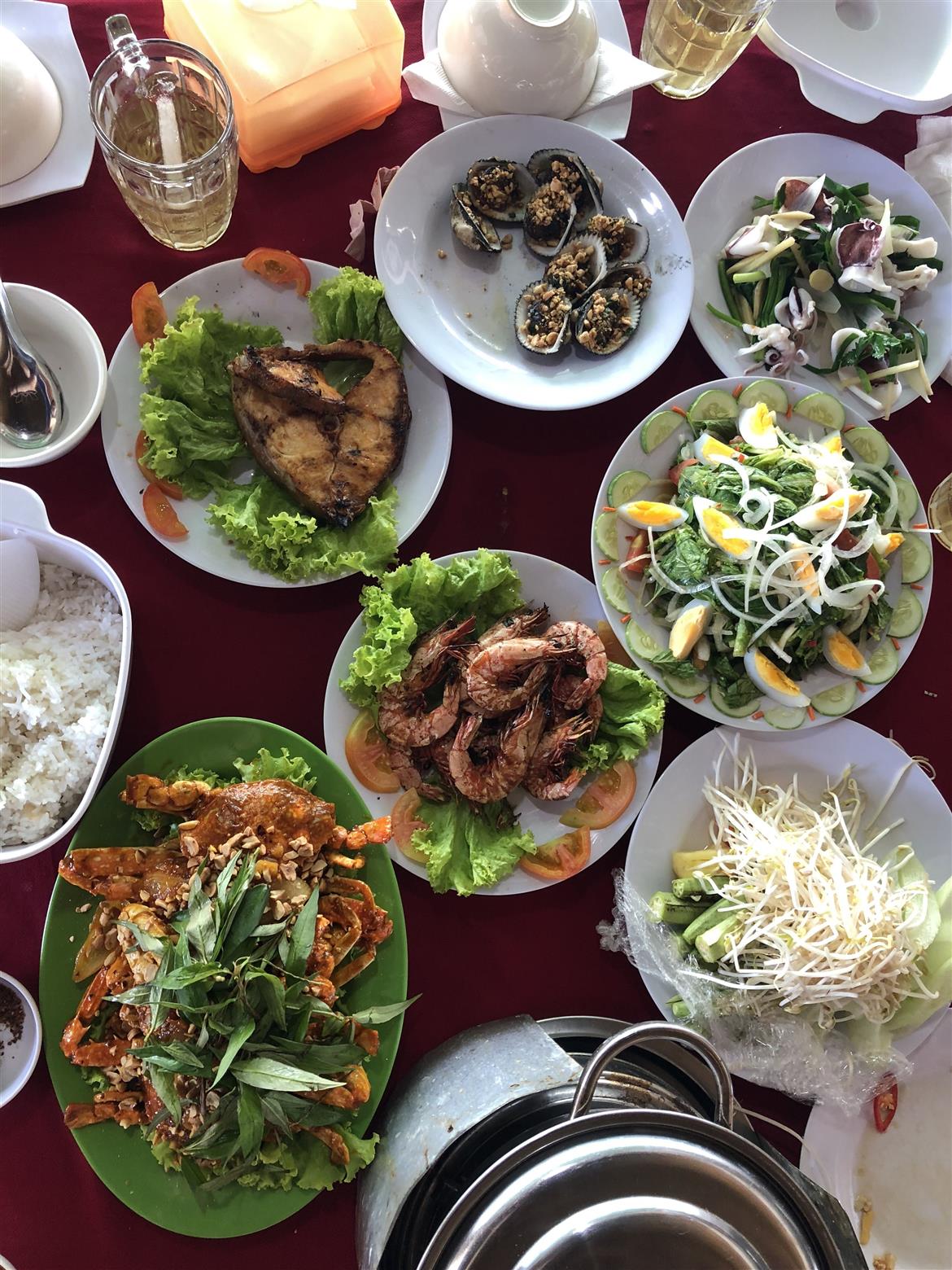 Seafood lunch at Bien Hai Quan restaurant at the Banh Trang area where one can see part of Cambodia.

Phu Quoc is also reputed to produce one of the best organic peppers in the country.

Our itinerary included a visit to Phu Quoc Countryside, where we toured a 20-year-old pepper farm, a brewery and learned to cook local dishes like fried spring roll, tuna in passion fruit sauce and Vietnamese pancake.

We also discovered how different types of peppers are harvested – white, black and red – from the 1,200 pepper trees at the 8ha farm, which plants passion fruits, bananas, mangoes, pineapple, ginger and lemongrass too. Each pepper tree can produce up to 1.5kg of pepper, with the farm exporting about half of the produce to Europe.

Our sightseeing continued on the third day with a visit to the Dinh Cau Rock temple, famous among locals who come and pray for health and safety, especially when fishermen go out to sea.

More than 100 years old, the temple looks like a miniature version of Tanah Lot in Bali, waves gently crashing over the rocks as visitors climb up the few steps to reach the temple. 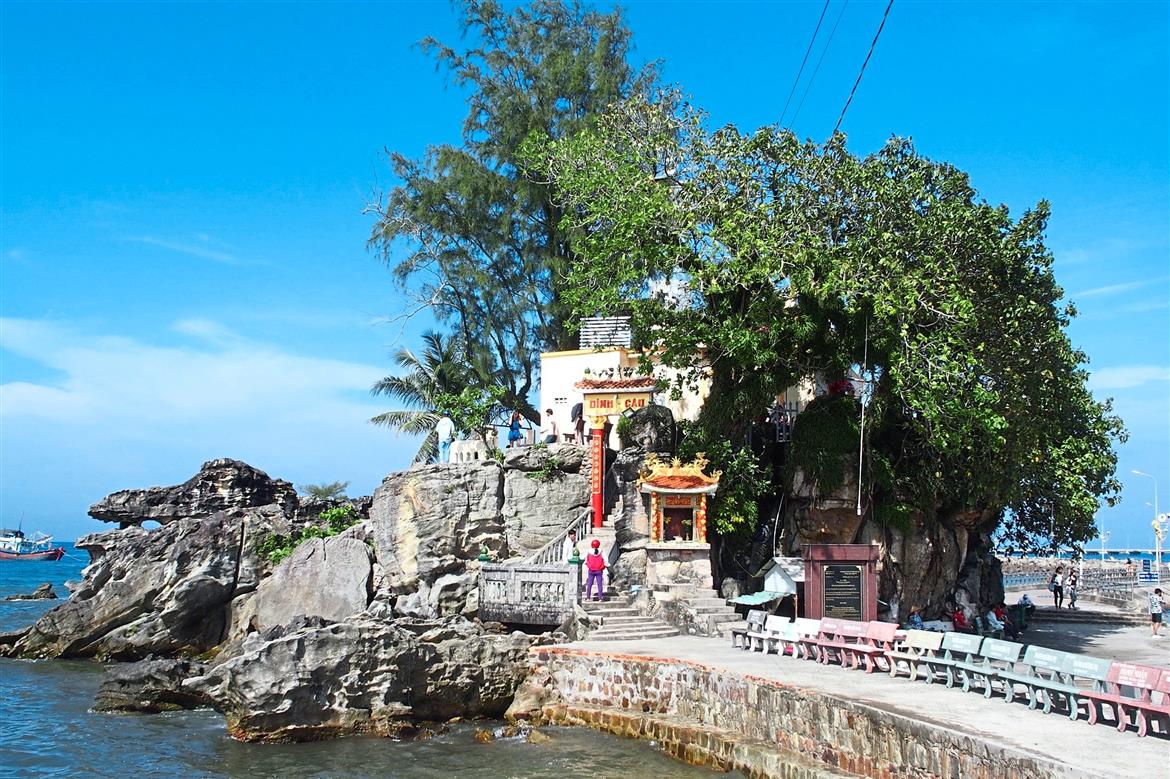 Dinh Cau Rock temple is over 100 years old and is popular with the locals who pray for safety and good health.

Meanwhile, offering an up-close experience with wildlife is the Vinpearl Safari and Conservation Park, spread out over 380ha and featuring over 150 species of animals.

A bus takes you into the safari to see a good number of lions, white rhinos, Bengal tigers, zebras and antelopes roaming freely or just lazing around. Later, you can also feed the giraffes, who never seem to get enough of bananas, at the feeding zone.

However, prices of certain items can be a bit steep for pasar malam standard, with a regular-sized bowl of coconut ice cream costing about RM9. For a more stylish night out, head to INK 360 at InterContinental Phu Quoc. Located on the 19th floor, it is the highest bar on the island. It offers a fantastic view of the sunset, weather-dependent of course, and is a great spot to end your day while looking out to the horizons of the Gulf of Thailand. 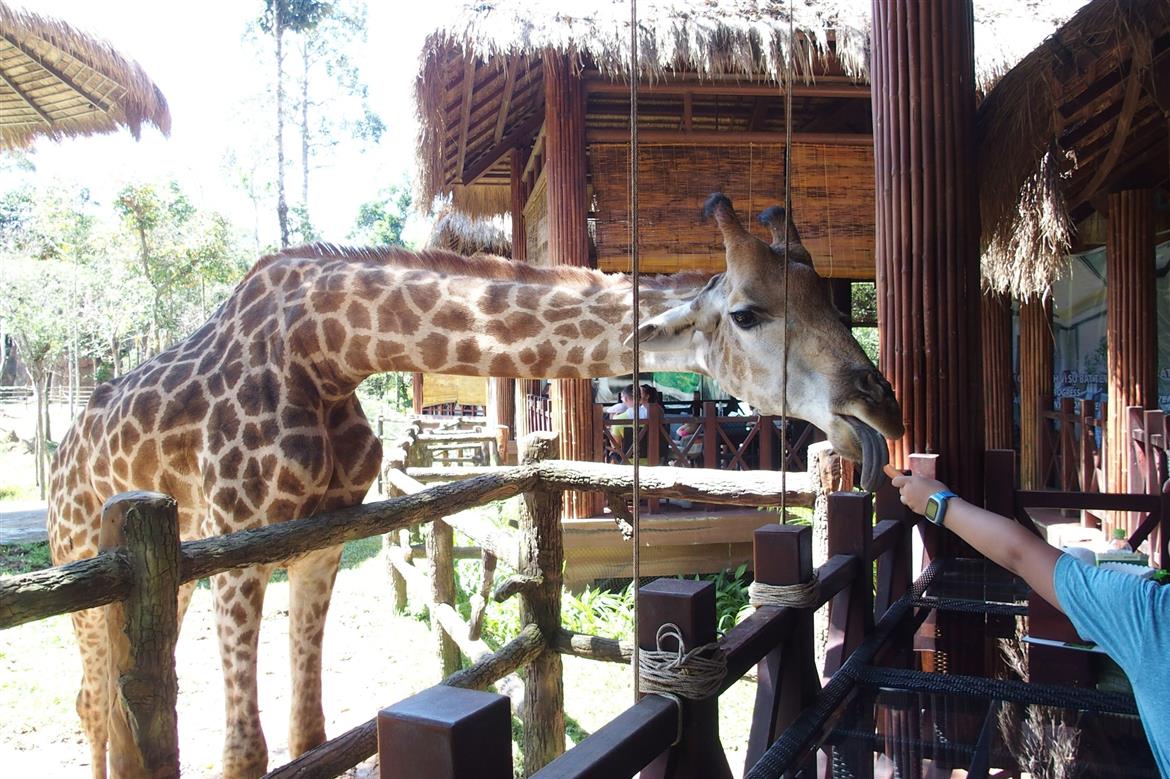 You can feed giraffes at the Vinpearl Safari and Conservation Park in Phu Quoc Island, Vietnam. 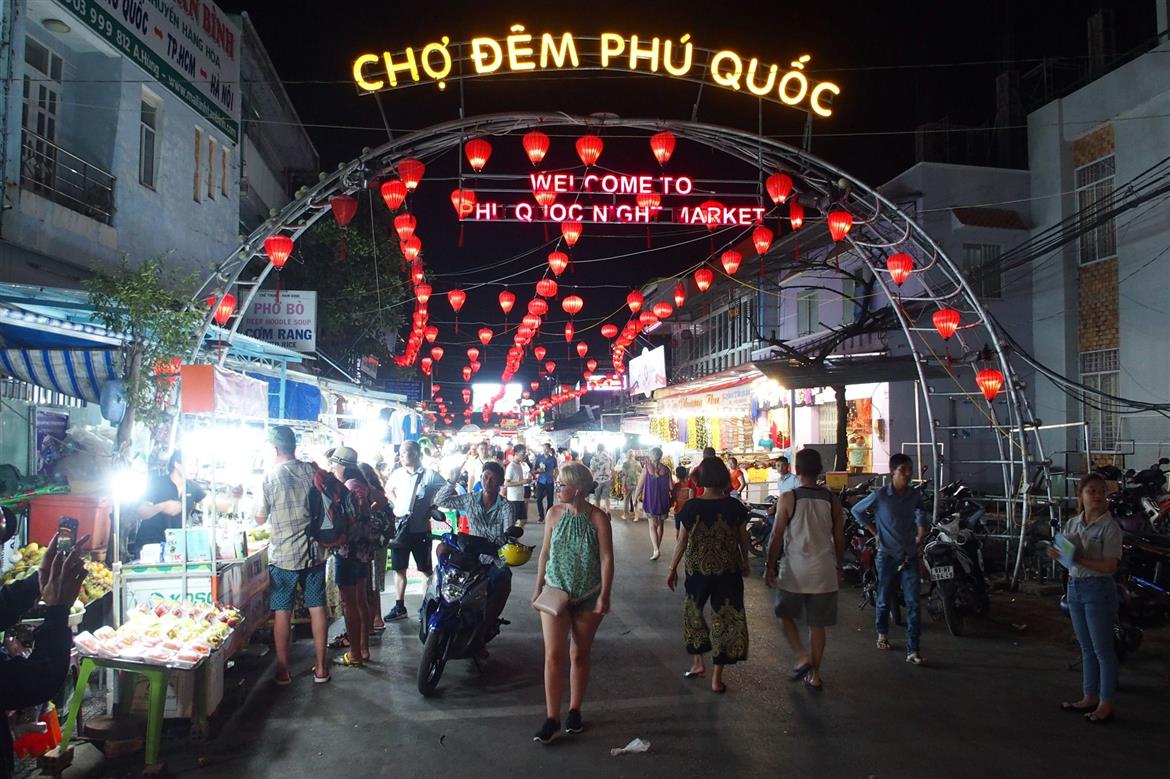 Travellers from all countries can visit Phu Quoc visa-free for up to 30 days.

Phu Quoc in Vietnam beckons with sandy beaches and a safari