Blunt crying as she discusses her plight in the aftermath of Hurricane Ida in Chalmette, Louisiana, early September. Photos: Gerald Herbert/AP

Darkness set in for Natasha Blunt well before Hurricane Ida knocked out power across Louisiana, the United States.

Months into the pandemic, she faced eviction in New Orleans. She lost her banquet hall job. She suffered two strokes. And she struggled to help her five-year-old grandson keep up with schoolwork at home.

Like nearly a fifth of Louisiana’s population – disproportionately represented by Black residents and women – Blunt, 51, lives below the poverty line, and the pandemic's economic fallout sent her to the brink. With the help of an aid group and grassroots donors, she moved to Chalmette, a few miles outside New Orleans, and started settling into a two-bedroom apartment.

Using a cane and taking a slew of medications since her strokes, she couldn't return to work. But federal benefits kept food in the fridge for the most part.Then came Hurricane Ida.

Ida was the fifth-strongest hurricane to ever hit the US mainland, wiping out Louisiana's power grid before marching up the coast and sparking devastating northeast flooding.

Among survivors of the deadly storm, the toll has been deepest in many ways for people like Blunt – those who already lost livelihoods to the pandemic in a region of longstanding racial and social inequality. 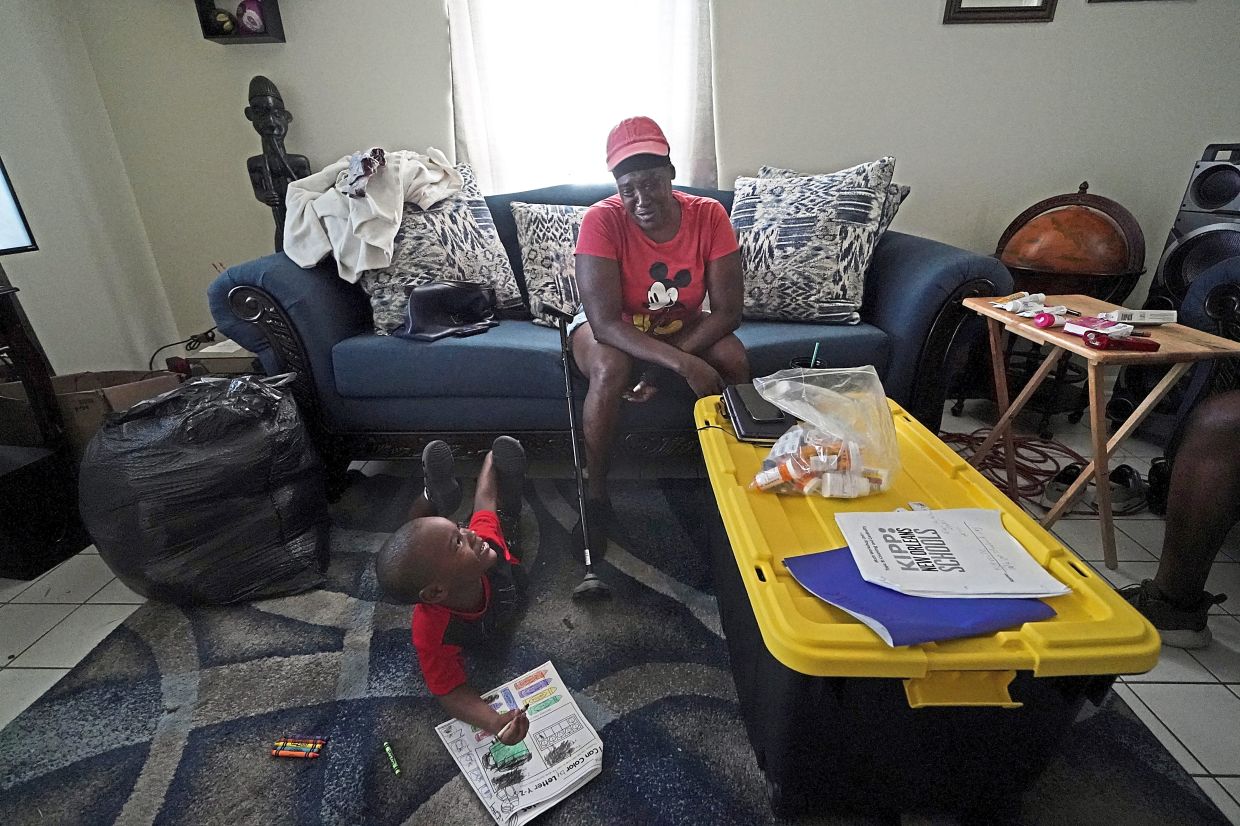 Blunt in her apartment with her grandson Kamille. Before the hurricane hit, the New Orleans native had hardly recovered from facing eviction and loss of her catering job during the pandemic.

Advocates say the small wins they’d made for marginalised communities and people of colour since the pandemic began have been quickly wiped out.

"The government is really disconnected from what it’s like for people who have little to no safety net,” said Maggie Harris, a grassroots organiser who created a fundraiser for Blunt.

"You marginalise people, you don’t pay them enough, they have health problems and aren’t insured, you offer little cash assistance or rent assistance, and you allow them to be evicted. The message that people get is their lives are expendable.”

As Ida approached, Blunt evacuated to a hotel. She could afford only a short stay and had to return to Chalmette, despite warnings not to go back to humid cities without power.

Her apartment was pitch black. Ida had blown in the windows of her upstairs bedroom. Beds, clothing and furniture were waterlogged. She’d spent her last dollars getting to the hotel.

"It’s like I’ve got to start all over again,” Blunt said, sobbing as she surveyed her first floor, where she sleeps since the bedroom is uninhabitable. "Every time I get a step ahead, I get pushed back down. And I’m tired. I don’t see no way out.” 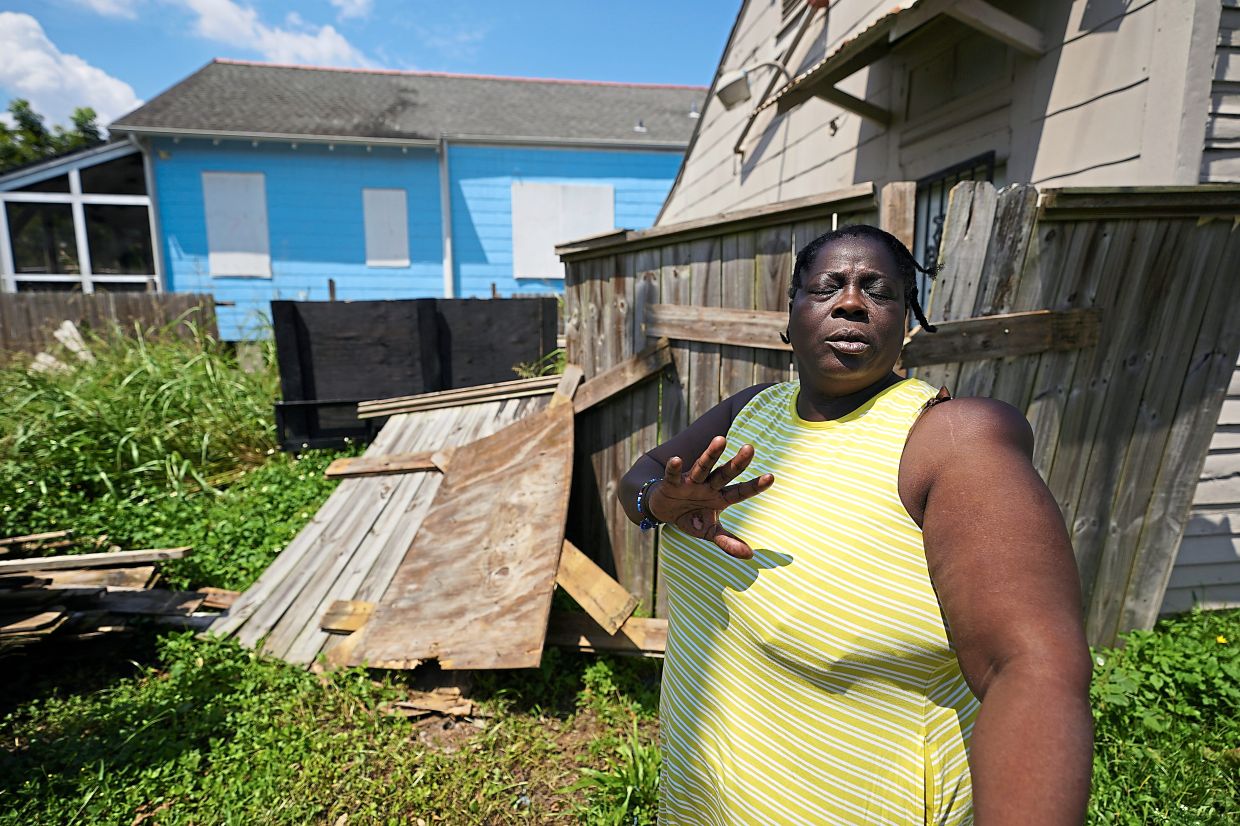 Kemp talking with a housing advocate in the aftermath of Hurricane Ida outside her rental home in the Lower Ninth Ward of New Orleans. Photos: Matt Slocum/AP

Blunt faces eviction for the second time in a year. Her only hope, she said, is Social Security and other disability benefits. She applied before Ida, she said, but hasn't heard back – safety-net programmes are often disrupted in disasters' wakes.

Blunt wants to move, perhaps away from the storm-battered Gulf Coast – somewhere grandson Kamille can resume schooling without worrying about power outages. But she’s far from optimistic.

"This is the end of the road; I can’t go on much longer,” she said. Kamille put down a worksheet to rub his grandma’s leg.

That's what happened during Ida, advocates say. In Louisiana, where 17 storms that caused at least US$1bil (RM4.15bil) in damage have hit since 2000, nonprofits see some of the most dire need and starkest divide along socioeconomic lines.

"One of the things that we get really frustrated about," said Ashley Shelton of the nonprofit Power Coalition for Equality and Justice, "is people saying, ‘Ugh, Louisiana is so resilient'. Debris is seen in the yard of Kemp's rental home in the aftermath of Hurricane Ida.

"We don’t want to be resilient forever,” she said. "When you force people to live in a constant state of resilience, it’s just oppression. Fix the systems.”

It doesn’t help that Louisiana’s poverty rate is higher than the national average, according to the Census Bureau's American Community Survey. Poverty makes the prospect of relocation precarious for people who were already struggling before disaster struck, said Andreanecia Morris of HousingNOLA, a programme of the Greater New Orleans Housing Alliance.

"Housing is a foundational issue for all of these catastrophes,” Morris said. "Our failure to address racial bias, gender bias and poverty bias in housing impedes all of those things.”

After Ida hit, Morris canvassed areas of New Orleans. In the Lower Ninth Ward, a neighbourhood that suffered immensely after Hurricane Katrina, 57-year-old Lationa Kemp found herself cut off from most aid. She'd been relying on neighbours with cars for ice, meals and water. She was without power, with roof leaks and fence damage.

Kemp had disputes with her landlord over the home’s condition. The threat of eviction loomed. Morris wants to get Kemp moved elsewhere permanently. In the meantime, Morris suggested a cooling centre.

"Thank you, baby, but I’m fine,” Kemp told her, explaining that she’d rather stay in a dilapidated home – past experiences make her fear the shelter system.

"I’m praying that when I leave here, I’m going to a better house.”

Blunt has survived her share of storms – starting with her birth during the fallout of Hurricane Camille in 1969. As she tells it, her pregnant mother had been moved to a naval medical ship. Today, Blunt chuckles over the coincidence of her grandson’s name, Kamille.

Remembering Katrina is scarier. Blunt evacuated, then returned to a damaged home. But Ida's been worse.

Blunt has considered leaving, as many Louisianans do in the wake of storms. No matter where she ends up, though, she knows she'll survive.

Even in the darkness, she finds some light by helping her community – seeking a power source for a neighbour's breathing machine, sharing her car for charging cellphones.

She tells herself: "I’m still standing.”She wants more not just for her, but for her grandson. "I want us to go somewhere better," Blunt said, helping Kamille with the TV remote, the power finally restored at home.

"Somewhere I can be stable. I just want to be stable.” – AP 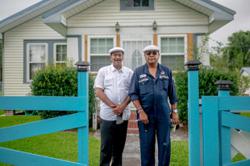