Late Malaysian football icon Mokhtar Dahari was recently recognised by world football governing body FIFA as the third-highest goal scorer in international football. In this 2015 story, former StarLifestyle writer N. Rama Lohan pays tribute to the legendary striker and the way he conquered the hearts of Malaysians with the beautiful game.

This story originally appeared in StarLifestyle (then known as StarTwo) on 4 September 2015, and has been edited for brevity and clarity.

It was a move not too dissimilar from when Diego Maradona took on half the English team in the quarter-final game at the Mexico 86 World Cup, only to score one of the most memorable goals in football history. And like the diminutive Argentine giant, the late great Datuk Mokhtar Dahari also donned the legendary No 10 jersey, the emblem of a star player.

Mokhtar, having already won the hearts of Malaysians with a sterling display against Arsenal FC in 1975, where he scored two goals, was up against the same foe as the Argentine, but a second-string England, or team B, as it was known. The late Mokhtar Dahari holding aloft the Malaysia Cup after Selangor's win in 1979. – Photo: THE STAR/C.H. LohHe raced past five English players, twisting and turning before tucking the ball home past a hapless Joe Corrigan who stood between the sticks, a goal that resonated with all Malaysians. Stadium Merdeka was a scene of revelry on that night in 1978, in a time when national sports regularly triumphed, bringing the nation’s multiracial society together as one.

The result may not have been significant, but the sense of unity it fostered was monumental. All of 45,000 fans thronged the stadium to catch the thunder-thighed titan – who rightfully earned the nickname Supermokh, the super hero for all Malaysians – and the rest of his teammates do the nation proud.

It all started rather unceremoniously for the little man born in Setapak, who indulged in countless kickabouts in around the Kampung Pandan area of Kuala Lumpur, his stomping ground in his early days. Mokhtar’s talent was evident from a young age and he soon drew himself apart from the rest of the pack with his talent and dedication.

His abilities grew exponentially from the time he studied at KL’s prestigious Victoria Institution to the time he donned the PKNS jersey, after securing a job with the state development organisation. It wasn’t long before his state of birth came a calling, and following his first season, where he earned the accolade of being top scorer, was soon drafted into the national team.

The striker’s rise was meteoric, and he was clearly a cut above the rest, even if he was always quick to credit his talented teammates for their contributions. Former Malaysian footballers Mokhtar Dahari (centre) and Reduan Abdullah during training in 1979. – Photo: THE STAR/C.H. LMokthar was weaned on the footballing brilliance of his hero, Brazilian legend Pele. And in his pursuit of greatness, he turned to grit and drive to take him across the finish line.

It’s an undisputed fact that Mokhtar Dahari was the greatest footballer to grace our pitches. He gave us all a sense of belief, and did it in the truest Malaysia Boleh spirit... surrounded by a supporting cast who all strove for the same thing – making the nation proud as one.

It’s now 30 years since his premature demise in 1991, the victim of motor neuron disease, but his spirit lives on in every footballer who takes to the pitch, and in all of us who support the great game together.

That coolly taken first goal against Arsenal FC in 1975, when a Malaysian selection beat the English club 2-0, will not only be remembered as a deft exchange between him and Isa Bakar, but one that fired unity straight into all our hearts, bringing us all together in the name of celebration.

From The Archives: Coliseum Cafe, a slice of Malaysian history for 99 years

From The Archives: The many types of laksa in Malaysia 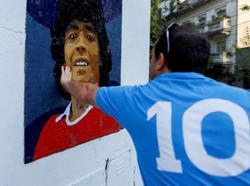